Share All sharing options for: The week in news- Scapegoats, Suspensions & Golden Tate 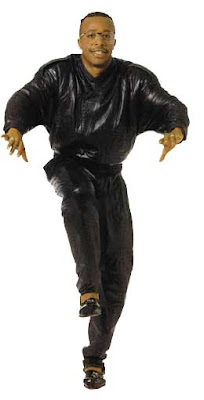 This whole FSU business with Bobby Bowden is ridiculous. Before Bowden the FSU claim to fame was a couple of Dixie Conference titles in the late forties. If you really want the guy to hang it up then at least have the discussion behind closed doors and send him off with some appreciation. You owe him that. After being publicly thrashed by the school he put on the map Bowden himself says he'll decide whether or not to coach next year after the season. Nice work FSU.

Elsewhere in College Football the Zooker is apparently pinning the blame for the Illinois woes on the Juice! The Zooker had nothing but love for Juice when the Illini went to the Rose Bowl two years ago. So much for that. Juice will be riding pine this Saturday when the Illini face Michigan State. I'm sure that's the spark the team needs. As a side note check Sparty out, they should be 3-3 overall and 2-1 in the Big Ten Saturday.
Out in Eugene it looks like LeGarrette Blount might be getting reinstated for the home stretch in November after originally being suspended for the season. In the off hand event that you forgot Blount went berserk Thunder Lips style punching dudes out and going after fans while getting dragged off the field following the Ducks opening loss at Boise State. I wonder if opposing players will taunt him when he comes back?
Dez Bryant has been suspended for the season at Okie State! This is a huge blow to Mike Gundy and the Pokes who started the season with some pretty lofty expectations. What is he doing hanging out with Deion Sanders anyway? Does Noel Devine know about this?
Texas Tech offensive tackle Brandon "Man Kind" Carter has been reinstated following a suspension for an unknown violation of team rules after the Houston loss. I wonder what he did to raise the ire of the Dread Pirate? Perhaps in his frustration he popped off something in the locker room about Blackbeard's affinity for pogeybait. Speaking of Texas Tech....
This is no longer directly related to college football but I found it too amusing to pass up. Back to back Biletnikoff winner Michael Crabtree finally came to terms with the San Francisco 49ers this week and signed his contract. Apparently M.C. Hammer was the guy that ultimately made it happen. Yeah that M.C. Hammer. I wonder if he sported those sweet baggy pants or busted any moves at the meeting? Can’t touch this!
Some rowdy Cajuns are apparently harassing Urban Meyer and some Florida players with text messages and prank voice mails. Someone shoot me those numbers I’d like to have a chat with Urban myself! I'm sure that Florida is now deathly afraid to face the Tigers on Saturday night.
Former Notre Dame and NFL great Joe Theismann thinks Notre Dame Junior quarterback Jimmy Clausen should return to ND for his senior year vice entering the NFL Draft. I personally think that as long as Weis is still the head coach Clausen will be back for another season. We'll see how it shakes out.
Golden Tate has been named the AT&T; All-America Player of the Week following his ridiculous production against Washington last Saturday. Jimmy Clausen also received the POW award following his week 1 performance against Nevada. Apparently I'm not the only ND fan that knows how to text!