Week 6 Preview- The Calm Before the Storm

Share All sharing options for: Week 6 Preview- The Calm Before the Storm 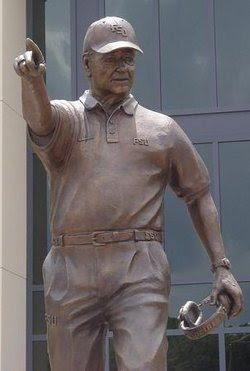 The list of interesting games this week is pretty short and I’m actually okay with that. The Irish are idle this week with the biggest game of the season looming on the horizon and one could probably argue that this upcoming tilt with USC actually represents much more than that. I’ll get to that next wee. In the mean time I plan to enjoy the long weekend by loading up the team and heading over to Blacksburg to visit the in-laws and take in another VT home game with my brother-in-law. Now that its deer season the dude practically lives in the woods so I’ll just call him the Deer Hunter. I went to the VT vs. Nebraska game with the Deer Hunter a couple of weeks ago just to see what Lane Stadium and the Hokie fan base are all about. Great experience by the way. This time I’m going for multiple reasons. The first and most obvious being that if you are going to visit family on a fall weekend and there is a college football game in town you are morally obligated to go, especially if it doesn’t conflict with you watching your favorite team. The second reason is that I really want to get eyes on BC and see what the hell is in store for the Irish later this month when they tangle with the team I like to call "The Jinx." I’ll actually be traveling to South Bend in a few weeks for that one so in a strange twist I’ll actually end up seeing BC twice this season. On the back side of going to the game which is a brutal Big Ten style noon kickoff I’ll catch the handful of interesting late afternoon and night games in the Deer Hunter’s man cave. The dude did it up right, and I’m jealous, as it is a fine place to watch some college football. With that here are the games I’m interested in this weekend.

Tuesday 6 October
Middle Tennessee State at Troy- Submitted only to make you aware of the fact that there is a Tuesday night game this week just in case you are hard up for something to do tonight.

Thursday 8 October
Nebraska at Missouri- This is a solid Thursday night contest and for all practical purposes could decide the Big 12 North. I was actually pretty impressed with the Huskers when I saw them live at Virginia Tech and not so impressed with Mizzu when I have watched them on TV. Blaine Gabbert and the offense are pretty good but that Mizzu Defense is a sieve. I expect the Huskers to punish them with the ground game and control the line of scrimmage when Mizzu has the ball. Gabbert will have to make his reads quick as Ndamukong Suh will wreak havoc on this Mizzu offensive line. That dude is a beast. I think the Huskers get it done on the road in this one and Gabbert will be the recipient of what one might call Chase Daniel payback.

Friday 9 October
Louisiana Tech at Nevada- I don’t really care about this game but it will be a fine excuse for the Deer Hunter and I to disappear into his man cave and pound some beers on Friday night.

Saturday 10 October
Auburn at Arkansas- This one is semi-interesting. Can Chzik and Malzahn stay undefeated against Petrino and Mallet? Will the former Chad Henne understudy light up Chzik’s D? He might but the Arkansas defense is pretty bad too so this one could turn into a shootout. In the preseason I said I like the Hogs to pull off a couple of upsets and they are due for one here. Sooooooeeeeeee.

Boston College at Virginia Tech- The noon start is really a kick in the shorts. Don’t get me wrong I’m ok with pounding beers at 9am but it does make for a real moronathon of a day in the Eastern time zone. By the time Florida and LSU kick off the Deer Hunter and I will have been at it for about 12 hours already. We’ll find out what kind of skills I have left on Saturday for sure. We’ll be taking the wives along this time so that will probably keep us pseudo in the box at least. As for the game itself Lane Stadium is loud as all hell and BC will have their hands full. The Jinx is always in effect but I see the Hokies cruising in this one. Hopefully it won’t rain too much.

Alabama at Ole Miss- Will Houston Nutt and company live up to the preseason hype and return to expected form? Nah. I expect Bama to beat the Rebs up pretty good and send them spiraling out of the Top 25 for good.

Wisconsin at Ohio State- This is a huge game in the Big Ten and I couldn’t be less interested. I’m just hoping tOSU knocks off the Badgers to get rid of one more undefeated Big Ten team. The Bucks should be able to handle that at the Horseshoe right?

Colorado at Texas- So will Colorado fire Dan Hawkins on Sunday if Colt McCoy and the boys hang 60 on them? We’ll likely find out.

Florida at LSU- Absolutely the game of the week here. Urban Meyer is going to roll into Red Stick with Tebow questionable and hordes of hostile Cajuns going berserk under the lights in Death Valley. Unless Brantley throws 5 picks I think Florida gets it done but on their home turf you can never count the Bayou Bengals out. I expect a classic Les Miles performance on the sidelines going for it on fourth over and over when it makes no sense etc. but I don’t think Jordan Jefferson is heady enough to deal with the ridiculous athleticism the Gators bring to the table on defense.

Michigan at Iowa- This game is yet another opportunity for an undefeated yet very pedestrian Big Ten team to go down. I’m all over the Wolverines in this one.

Georgia Tech at Florida State- Florida State fans and administrators are publicly calling for Bobby Bowden’s
head after a 2-3 start. Seriously? Talk about short term memory. Was Florida State a perennial powerhouse before Bowden was on the sidelines? Did you name the field after another Bobby Bowden? I get it the guy probably does need to retire but you don’t publicly tread on the guy that is for all practical purposes Florida State Football. You just don’t do it. If you are going to ask/ force him to hang it up you had better do so in a way that everyone thinks it was his idea and shows due respect. Don’t get me wrong, I don’t think Bowden has done much coaching in the last 10 years or so but at the end of the day he is and always will be Florida State football. Publicly running him out on a rail at this point is classless. Good job. With the way things are going they may turn the heat up even more come Sunday if Bowden can’t shut down Georgia Tech and pick up a W. I expect the Noles will rally around Bowden this Saturday and get it done.