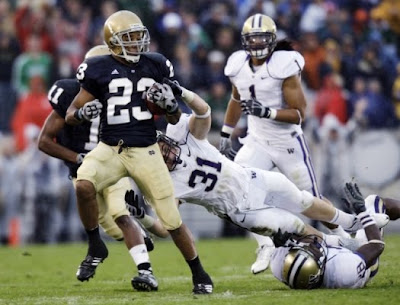 From a national perspective that wasn’t the greatest of college football weekends but the Notre Dame win over Washington more than made up for it at my house. I tried to watch the early games and got so bored with them that I actually went outside and got some yard work done. I settled in just prior to the ND kickoff and jumped on that emotional roller coaster for the rest of the afternoon. Me watching Notre Dame at home can be a bit of a spectacle at times and this week was definitely one of them. I generally get two TV’s going on Saturday but I didn’t bother with the second one this week as I expected the ND vs. Washington game to be the type of game that would prevent me from ever looking over at the other TV anyway. How true that proved to be. While I watch the game I’m in constant communication with my Dad and some other good friends around the country with a never ending series of short phone calls and text messages about the game. I’ve also taken to spraying my thoughts around on Twitter for the handful of OFD readers that like to follow that. The general agreement with the wife is that I don’t cuss in front of the kids and my self imposed rule I don’t start drinking until the Irish either have the game in hand or halftime whichever comes first. It helps me stay a little more rational late in the game. Despite this just moments after the game ended I realized that I was on my knees in the middle of my living room floor with fists pumping and yelling all kinds of nonsense. At that point I had a moment of clarity when I realized my wife and kids were sitting at the kitchen table staring at me and my wife was going into the "Daddy is just excited because Notre Dame won" routine. Good stuff, hopefully the kids will join in when they get a little older. Here are my takeaways for the week.

Colorado 24 at West Virginia 35- Dan Hawkins’ days are officially numbered in Colorado. At this point I’m curious to see if they even let him finish the season. They are not a good football team. As for West Virginia Noel Devine is still a burner but they really didn’t look very good either.

Pitt 35 at Louisville 10- The Big East is in sad shape. Louisville is really pretty bad and even with a 25 point win Pitt didn’t look formidable at all in this one. It remains a standard Wannestadt team that plays pretty well fundamentally and focuses on controlling the line of scrimmage on both sides of the ball. The two freshman running backs they rotated looked pretty decent but Pitt is definitely beatable.

Washington 30 at Notre Dame 37- I had originally intended to do a full follow up post to the one I did last night but after re-watching it I don’t think I need to. Amazingly I think I caught just about everything I wanted to say so I’ll just add my final thoughts here. The long version is below so scroll down a post if you are interested. There is one very important observation I did leave out last night. Perhaps it is the most important of all. This team believes. They believe in each other, they believe in the coaching staff and they believe that they will win. Once that happens for any team the possibilities increase by a factor of ten. Finding a way to beat Washington was a defining moment and what happens when USC visits South Bend in two weeks could potentially be an even bigger one. No Game Balls this week despite several outstanding individual performances noted in the post below. That was a full blown team effort on the field Saturday and they all earned a piece of it. When I was thinking about it today I kept hearing Harry Kalas announcing the old "Alcoa Fantastic Finishes" in my head. Those are the kind of games that make you turn it on every week.

Michigan 20 at Michigan State 26- I was glad to see this one turn out the way it did. I’m obviously not a huge fan of either program but I kind of like Dantonio. Not to mention it is always nice to see Dick Rod take one in the shorts. I still think both of these teams could be in the Big Ten mix well into November. There is a lot of parity in that conference right now.

LSU 20 at Georgia 13- Classic SEC defensive struggle. I honestly didn’t watch this one as it was on at the same time ND was and I didn’t bother employing multiple TV’s this week. Having seen both teams play previously and scrubbing the box score I maintain that neither team is probably going to beat Florida.

UCLA 16 at Stanford 24 – Check Stanford out. The Cardinal are sitting at 4-1 and at the top of the Pac 10 standings with a 3-0 conference record. They did lose to Wake Forest in week 2 on the road so what does that say about the Pac 10? Anything? Will Stanford stay in the race until the end of the season? Keep an eye on Harbaugh he might have a little something brewing out there.

Penn State 35 at Illinois 17- Why am I even mentioning this game? Oh yeah, Zooker watch. I’m guessing he’s not long for his job at this point either. The Juice and company have yet to show up.

Air Force 13 at Navy 16- With a victory at Navy-Marine Corps Memorial Stadium it would appear the Mids have all but locked up yet another Commander-in-Chief’s Trophy as Army remains a non-factor.

Florida State 21 at Boston College 28- The Noles keep finding a way to lose and the natives are restless. Are you really going to fire the legendary coach that your field is named after? Really? Is BC really any good or is this standard BC stuff where they play out of their minds for like 3 random games a year then screw around look like a .500 team the rest of the time? Who knows. I’ll try and figure them out this Saturday as I plan to take the team to visit the in-laws in Blacksburg and go watch them play Virginia Tech.

TAMU 19 at Arkansas 47- I tried to watch this game and instantly got bored with it. TAMU still looks like a pretender and I couldn’t take the whole Jerry Jones staged game business. It was a little much.

Auburn 26 at Tennessee 22- Check out Gene Chzik and Gus Malzahn out dueling the Kiffin boys at Neyland Stadium. I’ll be interested to see how the rest of the season plays out for the Tigers.

USC 30 at Cal 3- It would appear that the Trojans are back to looking like the Trojans again. Cal couldn’t do anything against USC offensively and USC just has too many playmakers for Cal to handle. I don’t want to start thinking about the showdown in South Bend two weeks from now just yet but needless to say the Irish will definitely have their hands full.

Oklahoma 20 at Miami 21- The whole time I was watching this game I had the feeling that Oklahoma was the better team there is just something not quite right about the Sooners right now. Obviously Bradford was still out but I don’t even think that’s it. They just don’t look like they really have it together and that has become somewhat of a recurring theme for them the last few years. Sometimes they look like world beaters and some times they just look totally out of synch. Strange. I’ll be interested to see how this plays out for Big Game Bob the rest of the season. If they can’t get it back together with Bradford under center before the Texas game they might end up in the Alamo Bowl.

Houston 41 at UTEP 58- After knocking off both Oklahoma State and Texas Tech the Cougars got taken out by none other than Mike Price and his UTEP Miners Saturday night in El Paso.
Case Keenum completed 51 of 76 passes for 536 yards in a losing effort! With that loss it would appear that CUSA has been eliminated from any potential BCS busting business for yet another season.