"They are a football team now"

Share All sharing options for: "They are a football team now" 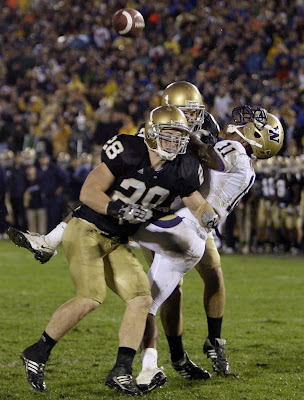 Wow, where do I start? I haven't re-watched the game yet as is my practice but here is my initial two cents on the events that happened at Notre Dame Stadium this afternoon. I will start by openly admitting that I probably need to be on blood pressure meds after watching the game. The first 57 minutes or so worked me over pretty good. Had the offense been able to finish just 1-2 of the 5 drives that ended in field goals the boys would have cruised to a comfortable win. Despite that this team never let up, never got down, and in the end found a way to win....Again! I can't say enough about just how huge that is. Is this team good enough to win the game today by 3-4 touchdowns? Absolutely, but it doesn't always go down like that as evidenced by the last 4 weeks. The difference between good teams and great teams, wannabe programs and solid programs is finding a way to win those games you almost let get away from you. This team did it for the 3rd straight week. I'll have a more intuitive wrapup after I re-watch the game but here are my initial thoughts and observations.