The week in news- Texas Tweets, KO's and The Molder Revisited

Share All sharing options for: The week in news- Texas Tweets, KO's and The Molder Revisited 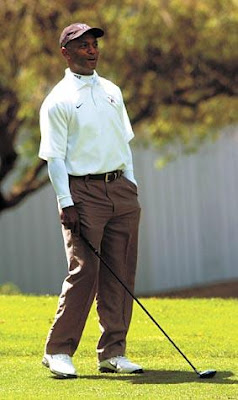 In the wake of Texas Tech becoming the second Big 12 team to get knocked off by Houston the Dread Pirate and his crew got into some public drama of the highest order over Twitter. For starters Offensive Tackle Brandon "Man Kind" Carter got suspended and Tweeted about it which was a total shocker because I always assumed that he was a model citizen. Then some other Tweets from players went down range talking smack about the Pirate himself who in turn banned Twitter for his players. Did you get all that? In the wake of said melodrama the Texas Tech student paper jumped all over the Pirate and at this point it sounds like the guy has a full on mutiny on his hands. It seems like just yesterday that Crabtree got loose on the sidelines as the clock would down against Texas and they ripped the goal posts down after "the biggest win in school history." Didn’t take long for that to wear off. The Wiz has a much better summary of the whole ordeal for those of you that so desire.

Only one month into the season it seems like key players are dropping like flies. Even the anointed one Tim Tebow got brutally knocked out Debo style last Saturday and from the sounds of it he still isn’t quite right. The Gators are idle this week but John Brantley is poised to start next week when the Gators travel to Red Stick where they will be met by roughly 100,000 hostile Cajuns and Les Miles going for it on every fourth down. Could be a recipe for disaster. By the way a poster on ND Nation wrote a little something this week called "The Tebow Creed" which is a must read for all college football fans.
Jermaine Gresham was the first superstar of the year to go down before he even played a game. In a shocking development he is apparently going pro vice sticking around for another year to roll the dice again. Barking Carnival has the scoop.
I was really enjoying Baylor putting up some W’s but they lost the one guy they couldn’t afford to lose when QB Robert Griffin went down with a torn ACL last Saturday. I guess we’ll see how good Art Briles really is now.
In the most bizarre and brutal injury I’ve heard of in a while USC running back Stafon Johnson had emergency throat surgery this week after a bench press mishap in the weight room. Reading the story it sounds like a pretty scary scene. Best of luck to Johnson on a speedy recovery.
A Louisiana Lafayette Cajun fan paid homage to Nebraska this week for the outstanding experience he had in Lincoln last Saturday during a 55-0 Nebraska victory. He seriously came away that impressed with the Husker faithful. They do it right in Lincoln.
Coaching is a high stress profession and no doubt there are heated exchanges behind closed doors between coaches all the time. But if you coach at New Mexico and you mouth off in a coaches meeting stand by for Mike Locksley to cold cock your ass!
There is another Bowl Game! The twist on this one is that the "Yankee Bowl" will feature a Big 12 vs Big East matchup at Yankee Stadium. That won’t suck in late December. I’m all about watching Bowl Games but they seriously need to start deleting them before they add any more. Pretty soon they’ll have to drop the requirement to 5 wins just to fill them all.
This Heisman stuff has really become pretty ridiculous. Here is the latest on the popularity contest from the WWL and Sports Illustrated. Seriously? I don’t’ know why I even look at it, I just get worked up for no reason.
Tony Barnhart doesn't think Boise State can get to the BCS Championship Game but the Idaho Statesman disagrees. I actually think the Broncs have a shot. What a crazy season this is already shaping up to be.
Notre Dame and Washington will face off Saturday in a battle of two teams intimately familiar with the Tyrone Willingham scorched earth policy. This matchup stirs up bad memories for both fan bases as thoughts of Ty came back this week much like the killer in a horror movie who suddenly springs back to life for one last scare. In South Bend Jimmy Clausen is ready to go despite not being quite 100% and in Seattle Steve Sarkisian has been jamming the ND fight song at practice this week to give the Huskies some extra mojo. I’m expecting a good game and hopefully
the team furthest removed from all things Ty takes care of business. I have this image in my head of "The Molder of Men" watching a play here and there between holes on the satellite TV in his tricked out mini Escalade golf cart while laughing out loud about the fortune he amassed from the two schools and muttering to himself "I’m Rick James Bitch."