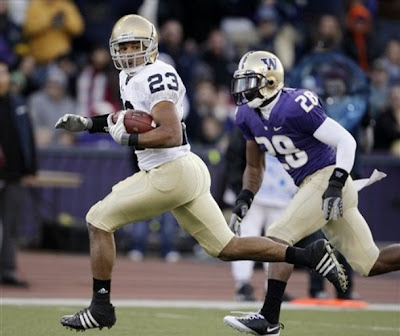 There are not a whole lot of games that look real intriguing to me this week as there are a few teams with the week off and several others finishing up the last of their "buy" games. Despite that there are enough interesting games to salvage a decent college football Saturday.

Thursday 1 October
Colorado at West Virginia- I’m just interested enough in this one to DVR it and watch it in 30 minutes over a cup of coffee on Friday morning before heading to work. West Virginia is well into the post Rodriguez descent but the way Colorado has looked lately the Mountaineers should be able to pull out the win and send Dan Hawkins one step closer to Franchione town. I really just want to see if there is any hope that West Virginia has the tools to play spoiler to Cincy in the Big East.

Friday 2 October
Pitt at Louisville- Pitt is another Big East team I haven’t really watched yet. I want to get eyes on and try to get a better sense of how they really look. Louisville is pretty bad so I expect Pitt to roll in this one. I'll probably give this one the 30 minute DVR review too.

Saturday 3 October
Washington at Notre Dame- This is shaping up to be another important game for the Irish. Who am I kidding, they are all important. These next two games against Washington and USC will have a huge impact on the season. When you consider the difference between being 5-1, 4-2 or 3-3 heading into the second half these next two games become very significant. Before I let myself go down that road of possibilities I will focus on the task at hand. I can only hope that the team does the same. Washington looked good the first three weeks, to include an upset of USC in week 3, then had a big letdown last Saturday against Stanford. That won’t likely happen again this Saturday in Notre Dame Stadium. Steve Sarkisian and Nick Holt have a history of beating ND while at USC and will have the Huskies both ready to play and convinced that they can win when they take the field. Coach Weis and the Irish will have to be ready and play a solid fundamental game to make sure that doesn’t happen. Washington has Jake Locker under center and as a result a pretty solid passing attack. Locker is also a threat to run and is definitely the best QB the Irish will face this season. The Washington rushing numbers aren’t great but they have also played half of their games against LSU and USC so that could be slightly misleading. The Irish have struggled against the pass the last two weeks and you can bet Locker will be looking to exploit that. In turn the Irish can’t get so focused on the pass that they have a let down in their run defense which has improved the last couple of weeks. I will be highly interested to see how Tenuta calls the game after having some success with a slightly less aggressive approach last weekend. Weis also mentioned in his Sunday presser that he wants Te’o on the field more and I won’t be at all surprised to see more of #5 and less of #49. That means Brian Smith sliding back over into the middle and Te’o giving chase to Locker from the Will. I like the idea and hope to see it employed on Saturday. As a side note Ben Turk is also listed ahead of Eric Maust as the Punter on this week’s depth chart. I can only hope the Freshman steps in and does a better job when required.

When the Irish have the ball they should have no issues moving it up and down the field. The Washington defense is mediocre at best and very poor against the run. That could also be partially attributed to playing LSU and USC but in short it hasn’t looked great and was very fortunate in the turnover department against USC. With that the name of the game needs to be run the football and keep Locker off the field. As well as Notre Dame has been running the ball this is a perfect opportunity to let the stable of Irish backs go to work and win the game. I hope to see Allen, Hughes, Gray and even Riddick pitch in to give the Huskies all they can handle. I also expect Clausen to throw it around some and pick at the Huskies with the short and intermediate passing game to keep things balanced, move the chains and work the time of possession. Kyle Rudolph is due for a big day and could help draw some attention away from Golden Tate to create a few opportunities to take a shot down field. Weis will also mix in some wildcat to keep the Huskies on their heels and I hope Tate keeps that duty at least one more week even if Allen is 100% as Tate was lethal last Saturday. That is the true beauty of the varied packages Weis has exhibited to this point is that Nick Holt really has his hands full this week with preparation and installation. If Holt had any hair he would have pulled it out Sunday watching the Purdue tape and trying to put his game plan together. It won’t take Weis long to figure out what the Huskies are most vulnerable to and exploit it. If the offense can control the clock, finish drives and continue to take care of the football it will put added pressure on Locker and help the Irish defense keep him in check. Coming off of three consecutive emotional games my biggest concern is whether or not the Irish have enough left in the tank to get up for a dangerous opponent with USC looming on the horizon. Knowing they have a bye week before the Trojans come to town and realizing the importance of the issue I think this team will respond and get it done. It probably won’t be by the 14 point margin the odds makers are laying on it but it sure would be nice if it was. I could use a slightly lower stress Saturday.

Michigan at Michigan State- The Michigan good fortune has to get derailed somewhere along the line and I’m liking Dantonio to pul
l it off in East Lansing. The officials can’t hook them both up!

LSU at Georgia- The Bayou Bengals haven’t exactly looked like world beaters in games against Washington and Mississippi State in September. Meanwhile Georgia has played a handful of tough games and their 3-1 record is well earned. I like Richt to get it done at home against Les Miles.

UCLA at Stanford- The Pac Ten is really strange. Right now these two teams, Cal, Oregon and Washington all look a little bit dangerous but not overwhelmingly scary by any stretch. Stanford is favored by a TD but in reality you can flip a coin on this one. It’s tough to bet against Slick Rick.

Penn State at Illinois- Penn State will bounce back from last week’s loss to Iowa and take the Zooker one step closer to looking for work. Why did I even list this one?

Air Force at Navy- The first installment of the Commander In Chief’s Trophy will go down in Annapolis on Saturday afternoon. This is one of those games that will only take 2 hours and set a record for fewest passes thrown. These teams are actually pretty evenly matched but I expect Navy to pull it off with home field advantage.

TAMU at Arkansas- This game is the product of Jerry Jones wheeling and dealing to get his alma-mater Arkansas into his new stadium in Arlington against a Big 12 team. The interesting thing is that these two teams are in very similar spots at the moment with second year coaches and coming off of rough seasons last year and both have looked much better so far this season. TAMU has rolled up Playstation numbers on offense against vastly inferior competition. Meanwhile Arkansas lost a shootout with Georgia and got handled up on by Bama last week. This will be a high scoring affair as both teams have good offenses and suspect defense. I’ll give Petrino and Mallet the benefit of the doubt.

Auburn at Tennessee- Monte Kiffin vs the Gus Malzahn offense. Interesting. Seeing how the elder Kiffin kept Florida in check I’ll assume he can do the same against Malzahn despite the man that started the "Wildcat" craze drawing crazy stuff up in the dirt on the sidelines. It will be fun to see how this one shakes out.

USC at Cal- I thought this would be a pretty decent game before Cal got run ruled at Oregon last Saturday. I’ll keep a close eye on this game as the Trojans will be visiting South Bend in two weeks and I expect they will take care of business in Berkley.

Oklahoma at Miami- Miami is trying to regroup from the beat down they received from Virginia Tech last Saturday and Oklahoma is looking to beat a good team after run ruling inferior competition for the last two weeks. Oklahoma hasn’t given up a point since they were upset by BYU in Week 1 so watching Jacory Harris and company try and eek out some offense in this one could be entertaining. I’ll take the Sooners solely based on their defense.