Week 4 Preview- Beware of the Trap!

Share All sharing options for: Week 4 Preview- Beware of the Trap! 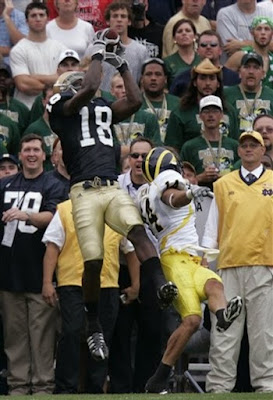 I was on the road the first two days this week so I’m a little behind this week and I’m finally catching back up. There are several interesting games on tap this weekend and mixed in there are a few potential "Trap Games" where someone will likely get caught looking. It better not be the Irish!

Thursday 24 September
Ole Miss at South Carolina- Houston Nutt and company got a lot of love in the preseason and have been relatively unspectacular so far. The Fighting Cocks had quite a shootout with Georgia a couple of weeks ago and might be primed to send the Rebs the way of Okie State.

Friday 25 September
Missouri at Nevada- I’ll watch this just to get a good look at where Mizzu is and see if Nevada is going to bounce back from that 0-2 start. Based on the way Jimmy Clausen carved up the Nevada secondary I have to assume that the high flying Tiger attack has the ability to score some points in this one. I’m more curious to see if they can stop Colin Kaepernick in turn. I’ll take Mizzu in a shootout.

Saturday 26 September
Notre Dame at Purdue- I’ve had this one as a lock em’ up win for the Irish all along then today it occurred to me. This game has all the makings of a trap. On paper Purdue has no business giving the Irish a game but when you peel back the onion it isn’t that cut and dried. For starters the Irish are coming off of two very emotional games, one a heart breaker and one a close escape. Clausen is supposedly starting but he’ll miss some practice time this week which could be a factor as he needs some reps with a receiving corps looking to fill the void left by Michael Floyd. As of now Duval Kamara is listed as the starter but I expect to see Parris, Evans, and maybe a little Walker and Goodman as well. The way that the rushing attack has come on lately I dare say Weis should be able to pound it on the Boilers and control the clock. He’ll mix in plenty of short to mid range passes to work in the receiving corps but there really should not be any need for the bombs away approach. The Irish just need to play a solid fundamental football game on offense, control the clock and get out of dodge. The Irish defense on the other hand will have to find an answer for running back Ralph Bolden who put up Playstation numbers the first two weeks against Toledo and Oregon. QB Joey Elliot has also been pretty decent. In short if the Irish defense doesn’t tighten things up this might be considerably more interesting than it should be. Purdue is coming off a bad loss to a MAC school and has the home field advantage at Ross-Ade, under the lights in a nationally televised game. This is the game of the year for the Boilers and they’ll come out swinging. The Irish need to set the tone early on defense and avoid a shootout. As a side note I’ll be watching this one with a buddy of mine who is a psycho Boiler fan. I cringe at the thought of losing this one for 100 reasons but him talking smack is high on the list. I think the Irish get it done and hopefully by a much larger margin than I’m expecting.

Michigan State at Wisconsin- I think Sparty bounces back and makes some noise in the dilapidated Big Ten. Wisconsin beat Northern Illinois by a touchdown in week one and should have lost to Fresno State in week two. I’m not buying Camp Randall this year. Sparty rolls.

Southern Miss at Kansas- This is a major trap game for Kansas. Larry Fedora played Mangino when he was still at Okie State and knows how to give the Kansas D fits. This has all the makings of a crazy shootout and Rock Chalk Jayhawk might be in trouble here. This is a big week for CUSA and Southern Miss will be up to the challenge. These CUSA teams are tired of hearing about the Mountain West and I think the Golden Eagles will give Kansas a good scare.
North Carolina at Georgia Tech- Georgia Tech has been shut down for the last six quarters and you know Butch Davis was paying attention. He’ll be all over whatever Clemson and Miami did on defense. UNC is quietly getting better and this should be a good game. I’ll give Paul Johnson the benefit of the doubt that he can bounce back.

Fresno State at Cincinnati- Cincinnati drives me insane but chances are if you stop by here on occasion you probably already knew that. In reality it is because every time I see someone calling for Weis’ head and saying he should be replaced with Brian Kelly I lose my mind. Kelly isn’t helping me out by winning games but he needs to start this weekend. I have watched Fresno State blow two wins against Wisconsin and Boise State. Will they blow this one? Can Cincinnati shut down Bulldog running back Ryan Mathews? Dude averages 9.1 per carry. The Bearcats probably win again but I'll hold out hope the Bulldogs can hook a brother up with an upset.

Arkansas at Alabama- Ryan Mallet and the Hogs have been on fire offensively but their defense is as bad as their offense is good. I still think they might upset a couple of teams in the SEC this year. Alabama won’t be one of them but this will be a good test for Saban’s defense.

Cal at Oregon- Now that I think about it, I’m really not that interested in this one. Jahvid Best will run for 200 and Cal will roll. I did hear that Webfoot U is wearing "throwback" unis though. They could probably donate half of their uniform budget to the government and get us out of debt.

Illinois at Ohio State- I’m
ready to take a break from the Big Ten. That is most likely due to the fact that ND opens up by playing what seems like half the Big Ten every September. I’ll be glad when this weekend is over. Then I can just stand idly by and wait to pick against every Big Ten team in a bowl game.

Miami at Virginia Tech- Now this might be a really good game. On paper there is really no reason to believe that the Hokies can win this game. Their defense is great but their offense is truly anemic. It took a last second miracle for them to slip past Nebraska last weekend. That said Beamer has been very successful against the Canes over the years and this game is in Blacksburg where the Hokies have a definite home field advantage. If the Hokies win it will be one of those classic "Beamer Ball" victories where they win the turnover battle and play inspired special teams to pull off the upset despite being out gained by 200 yards. For all practical purposes this is the ACC Coastal championship game and it is being played right here in week 4. I’ll take Miami in a close one, I think the Hokies used up the last of their magic last weekend.

Florida at Kentucky- I’m thinking the Gators might hang 50 on Kentucky since everyone has been singing them all week about only scoring 23 against Tennessee.

Texas Tech at Houston- With Houston beating Oklahoma State in week 2 I’ll be interested to see how they look against Leach and the Raiders. I suspect Tech will handle up on the Coogs and take Okie State’s preseason hype down yet another notch.

TCU at Clemson- I think TCU is sick of hearing about Boise State. With BYU and Utah losing the Horned Frogs are the last shot for the Mountain West to bust the BCS. To pull it off they’ll have to knock off Clemson in Death Valley this Saturday. I expect a low scoring affair but Clemson should be able to manage a win.

Washington at Stanford- Stanford is favored by a bunch. Is the U-Dub for real or was the USC win a total fluke. Based on what I’ve seen out of Locker and the Huskies so far I think they look pretty tough. I’ll be sweating it a little next week when they visit South Bend. In the mean time I think they go ahead and knock off Harbaugh to get to 3-1.