Share All sharing options for: Week 3 Wrap Up- Good Times 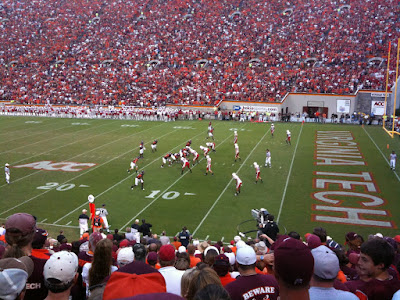 Overall that was a solid college football weekend. I went to the Virginia Tech vs. Nebraska game with my brother-in-law which was a great time. They do it right in Blacksburg and the game itself was great. Not watching the ND game live also probably saved me from shaving another few months off of my life expectancy. On with the details.

Georgia Tech 17 at Miami 33- Miami is a factor and the game at Virginia Tech next Saturday is now huge. Will Georgia Tech get back on track? Can Miami score points like that against Bud Foster? We will find out in a few days.

Boise State 51 at Fresno State 34- This game was ridiculous. I still don’t think Boise State is all that good but since they don’t really play anybody there is a very good chance they end up back in the BCS.

Michigan State 30 at Notre Dame 33- I wasn’t watching this game live and for some reason the 3G network cannot penetrate the walls of Lane Stadium. I was able to receive texts though so both my Dad "The Coach" and OFD regular commenter "Dimes" kept me updated on what was happening in South Bend and elsewhere with a steady stream of text messages. Since I knew what happened before I watched the game on my DVR my perspective might be a bit different. I didn’t have to live through the emotional turmoil of watching it live so I might be a bit more objective about it. My biggest takeaway is that the team found themselves in another slugfest with things going south only seven days removed from losing the last one. They found a way to win this time and that is significant. The last time that happened Brady Quinn was on the field. Here’s the list of observations.
-Clausen is serious. He played the last three quarters hurt and kept producing. He is scary accurate especially with his long passes. It is impressive. I can’t say enough good things about Clausen right now.
-Floyd being out for what appears to be the season is a big blow. In my opinion he’s the best receiver in the country and you aren’t going to replace his production. That said this is a great opportunity for Kamara, Parris, Evans, Goodman and Walker to step up. One or two of those guys will end up having a very solid season in Floyd’s absence. I try to remind myself that Floyd spoils you but these kids all have the potential to be very good and contribute.
-Golden Tate had a solid day in Floyd’s absence. He’ll need to keep it up. He had another couple of critical drops and he also pulled up on a route that should have been an interception as a result. Let's hope he tightens that stuff up quickly. He still had 7 catches for 127 yards and a TD but he could have had a real monster day. I could do without the swan dive into the Michigan State band. Not smart.
-I am okay with the Wildcat wrinkle. The production out of it is pretty good overall. The TD pass from Allen to Parris was nice.
-The game was real chippy and pretty physical. It was obvious the two teams don’t care for each other. That said ND had too many bonehead penalties which is probably attributed mostly to getting caught up in the emotion of the game. Can’t let that happen.
-Hammond is the worst announcer ever. He’s horrendous.
-The refs were again suspect. The Floyd TD play was brutal and ultimately a 4 point swing. The non call of the KLM molestation play that was sandwiched in between the Blanton and Harrison Smith personal foul calls was also terrible officiating.
-The run game is very encouraging. Charlie can now run on 2nd and 10 and 3rd and short and get what he needs. Nice to see that again.
-All backs not named Armando Allen need to do a better job in blitz pickup.
-Rudolph is a great receiving Tight End.
-The secondary playing soft is bizarre. The Irish seemed to give up the most passing yards on routes going across and up the middle with linebackers in coverage. The linebacker play in general is perplexing. The Coach and I discussed this tonight. Has to be largely schematic.
-The defensive line looked a lot better. That said I’m in the camp that would like to see E.J. back at DE and let Hafis Williams and Brandon Newman line up next to Ian Williams in the middle. KLM is coming along and had a great play when he chased down the screen and caused the fumble.
-Overall this offense is solid and has the ability to score on anybody at any time. The defense remains a work in progress. There are some positive signs sprinkled in there as well but the offense will have to carry the load until the defense gels.

Offensive Game Ball- Jimmy Clausen. 22 of 31 for 300 yards and 2 TDs. Also still no picks after 3 weeks. Knocking on wood now. I hope he’s healthy enough to go this week. He has truly become a leader and is truly the key to the offense.
Defensive Game Ball- Kyle McCarthy. No brainer. 3rd straight week with a pick, this one to save the day. Nice. As a side note it was also nice to see Darius Fleming have a pretty solid game. He was very disruptive.
Final thought- The fact that the team pulled this one out really is significant. That was a tough game but they overcame another rough scenario and pulled it off. Nice work.

USC 13 at Washington 16- USC appears to have a serious quarterback issue. Let’s hope that continues through October 17th. The Washington game is no longer a gimme. Wow.

Nebraska 15 at Virginia Tech 16- I went to this one with my brother-in-law and had a great time. We headed out relatively early and he turned me on to what he called "The official tailgate drink of all Hokies" which is of course Wild Turkey. We roamed the tailgate scene on campus with a pair of 32oz Hardees cups full of that and a splash of
Coke. The tailgate scene was great and there was a smattering of Huskers mixed in there. The Hokie fans were very accommodating and both fan bases were great all day. We met up with some other buds, and spent a couple of hours at their tailgate just talking football. Somewhere in there we switched to beer then headed towards the stadium with plenty of time to spare before kickoff. Maroon and Orange Hokie "Fan Cans" were abundant everywhere. Bud Light is scoring big in Blacksburg. On the final walk to the stadium the brother-in-law successfully brokered a series of deals and we ended up with some additional beers and a couple of airplane bottles of something called "Fighting Cock" in the process. He was on fire.
I was impressed with the inside of the stadium. It isn’t real big at 68k but it looks and feels much bigger than that. It is very steep all the way around and has a huge bank of press boxes and luxury boxes on the home side that looks 100 stories tall. No noise gets out of that place at all and it was loud as all hell in there. It lived up to the hype about the noise. I’ll try to get some video up when I have time later this week. The team entrance to "Enter Sandman" was actually pretty damn cool. The crowd was so loud that you really could not even hear the song on the PA system. The place went berserk when they took the field.
Throughout the game the VT Fans did a great job of being loud as all hell every time Nebraska was trying to get a play off. They were solid. As for the game itself I was really impressed by both defenses. Watching Bud Foster and the Pelini brothers lock horns was impressive. Nebraska really had the Hokies bottled up for 59 minutes. Suh is an absolute beast at DT. ND needs to find a DT like that. Good lord he is a man. Generally speaking the Blackshirts ran to the ball well all day and made solid tackles when they got there. Offensively I really thought Zac Lee did a great job. His number weren’t great but I was really impressed with how he ran the offense and handled the hostile environment. Roy Helu is also a quality back. As for VT I spent the first 59 minutes wondering why Stinespring doesn’t turn Tyrod Taylor loose to run. For the first 59 minutes he unsuccessfully tried to be a drop back passer. In the last minute he finally got outside the pocket made the safeties guess whether he was going to run or pass, then made plays while they froze trying to figure it out. Why didn’t they do that by design all day? Who knows. The Bud Foster Defense is definitely for real and like Nebraska also very fundamentally sound. The place was off the charts insane after the big play to get down to the three and the subsequent game winning TD. It was wild. I felt really bad for the Husker fans though. I can identify. Overall it was a great college football game at a great venue with two great fan bases. Where else can you see a great college football game and go deaf after drinking a half gallon of Wild Turkey and Fighting Cock? Good times. 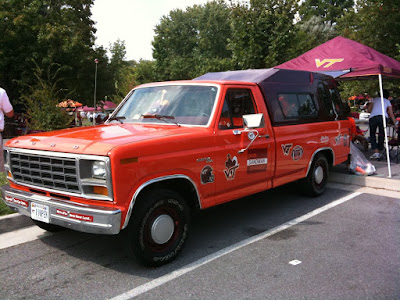 Florida State 54 at BYU 28- There is now one less potential BCS buster. The Cougars got worked.

UCONN 30 at Baylor 22- I still think Baylor will go bowling.

Cincinnati 28 at Oregon State 18- I’m still not buying it. The Big East is terrible.

Georgia 52 at Arkansas 41- The Petrino offense with Mallett at QB looks pretty serious. Both teams forgot to bring their defenses to the game.

Texas Tech 24 at Texas 34- The Texas Tech defense actually held the Horns to 28 points. This game was hard hitting and closer than it looks on paper. I was impressed the Raiders actually had some defense and played hard. The Raiders held up much better than I expected them to. After last night I think they have the ability to trade punches with just about every other team in the Big XII. It will be interesting to see them against Oklahoma and Okie State this year.