The week in news- Sweatervest, The Pirate and Bleaksburg

Share All sharing options for: The week in news- Sweatervest, The Pirate and Bleaksburg 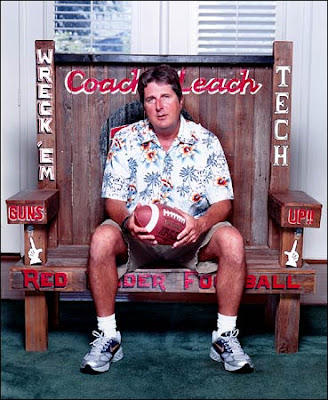 Not too much in the way of national news caught my eye this week. Now that the games are cranked up that is really the focus of all discussion around college football and it should be. Going forward I may give TWIN a break but I'll play that one by ear. There were a couple of things this week I found humorous and or interesting.

Ohio State fans are talking smack about The Sweatervest himself Jim Tressel. Seriously? He’s the best thing that’s happened to that program in decades. Tressel has dominated the Big Ten and even won a National Title. Remember John Cooper? Stop complaining and start the plans for the statue you should be building of him outside the stadium. I can’t wait to see what they do if Dick Rod actually takes over the conference and starts beating the Bucks. 120 teams and 119 of them want to fire their coach if they don’t win the title this year. Chill out and enjoy another 10-11 wins.

On the back side of their controversial victory in Columbus the Trojans aren’t sure if their super freshman QB Matt Barkley can go this week. What will the WWL do if they don’t have Barkley and Forcier to dote on this weekend? Once Corp plays Barkley may not get his job back. That said I hope Sneaky Pete plays musical broken QB’s all the way to South Bend next month.
Texas A&M; hired Mike Sherman from the NFL. After an abysmal 1st season he consulted some Texas High School coaches to tweak the offense. Note to TAMU. You could have hired those dudes for about 10% of what you are paying Sherman.
For the first time this season the Dread Pirate will surface this Saturday in Austin. He’s been busy down in Lubbock running the score up on local junior high squads in preparation for the showdown with the Horns. In the mean time he gave Hub City locals his two cents on how to manage credit cards in yet another bizarre spot on the local news. The Wiz is all over it.
It isn’t Texas vs. Texas Tech week without getting the Texas perspective from the gents over at Barking Carnival. They have skills over there, real skills. It’s worth checking out not only for the picture of Yoda as a pirate but also for the clip of Nathan Vasher laying waste to Carlos Francis.
This is the last thing I'll say about the ND Michigan game last weekend. The officials really were horrendous and it was maddening. Check out this compilation from ND Nation if you aren't buying in. After I saw this I got so riled up I had to go run about 6 miles to chill back out. Hats off to the team for not totally losing their collective minds during the game as a result. They have all carried the party line this week and I agree. No matter what the scenario it is still on you to win the game. It was brutal but I like the way they handled it both during the game and since. I don’t know that I could have done it. With that on to Sparty.
I’ve gone on at length this week about my feelings on where Notre Dame is and my take on the Michigan State game so I’ll avoid unnecessarily repeating myself again here. Bottom line, I’m still on board for the big win. Nothing but support from this guy. If you want the full meal deal feel free to scroll down. As an added bonus I even left a recipe for the best burgers you'll ever eat in my IBG post this week.
With that I’m heading over to Blacksburg tomorrow to spend the weekend with my brother-in-law watching a ton of football and getting the full court press on all things Hokie. Since I’m going it will rain like every other time I go there. They don’t call it Bleaksburg for nothing. I’m looking forward to a great intersectional game at Lane Stadium and visiting with fans from both VT and Nebraska. I’ll let you know how it shakes out. In the mean time best of luck to all of your teams this weekend and enjoy the games. Unless of course you are a Michigan State fan…Go Irish!