Week 3 Preview- "I Dreamed It In My Mind"

Share All sharing options for: Week 3 Preview- "I Dreamed It In My Mind" 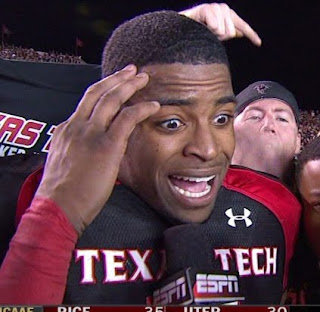 There are several things afoot in week three as things are about to heat up. There are still several teams marking time with "buy games" but there are also more good matchups than we’ve seen in the first two weeks. This weekend things will start to get interesting. Here we go.

Thursday 17 September
Georgia Tech at Miami- Last year Georgia Tech ran wild on the Canes. Until Miami stops it I have no reason to believe that they can so I’ll give the nod to the Jackets in this one. That said I’m guessing Randy Shannon and the rest of the ACC are studying what Clemson did to shut down Paul Johnson’s attack in the 2nd half last week. Did they learn anything?

Friday 18 September
Boise State at Fresno State- Fresno State had Wisconsin beat last Saturday and let it get away from them. They should give Boise State a run for their money but I think the Broncs still pull it out.

Saturday 19 September
Michigan State at Notre Dame- Nice to see most Irish fans regrouping this week after an emotional loss last Saturday. Several of the great ND Bloggers linked in my right side bar have written very good posts this week about expectations etc. Good stuff all around from all of them, I was glad to see that I wasn’t on an island with that sentiment. I have said my piece before so I’ll try not to rehash it all. We have to appreciate what this team has gone through the last two years and not forget all the factors that got them into that situation in the first place. Calling for Weis’ head after a perfect storm loss in week 2 is the last thing we need to be doing right now. Despite the lack of run defense so far this front seven is young, athletic and should improve quickly. Not to mention those first two offenses they faced aren’t the easiest to defend, as there is a lot of assignment football that has to be executed against the spread. Meanwhile the Notre Dame offense is going to be a force to be reckoned with all season. This roster still has only 6 starters that will exhaust their eligibility this season and as a whole this team should continue to get better as the season progresses. We are witnessing the final stages of a young team growing up and realizing their potential. I try to remind myself that this team essentially had to start over from scratch just two years ago.
Going from .500 to a National Title wasn’t ever going to happen but right now the program has a coach at the helm who is steadily making noticeable progress and he "gets" ND because he’s always been a part of it. All we can do as fans is support him and this team like a rabid band of patriots and strap on the exciting ride that should be the next 11 games. If we need to re-evaluate in January then we’ll do it then. As for Michigan State, I was worried about this game until about two days ago. I still expect Sparty will bring their A-Game and Dantonio will do his damndest not to let his boys get caught slipping two weeks in a row. That said I expect to see some fight out of the Irish on Saturday. This game will be a great indication of what this team is really made of and I expect to see good things at Sparty’s expense. Are we going to cut and run or come busting back through the door with both barrels blazing? This is the perfect setup for the Irish to start really turning the corner and Michigan State is the perfect team to do it against. Their conventional offense should allow the Irish D to settle in a bit and pin their ears back more than they have the first two weeks which should provide some productive therapy. The offensive line also needs to test the newly rediscovered running game against a defensive line that dominated them last season. In the mean time I don’t think they have an answer for Floyd, Tate and Rudolph. I expect a very positive step back in the right direction on Saturday.

Tennessee at Florida- Will Meyer go balls out and try to hang 80 on young Kiffin? That’s really the only question going into this one. I expect extreme domination and off the charts taunting from the Gators.

USC at Washington- This will be an interesting test of how much better Washington really is. How do these coaches game plan against each other when they all run the same stuff and know each other inside and out? Weird. USC still has much better kids but they do like to drop 1-2 each season that they shouldn’t. Barkley is no world beater just yet and I won’t be too terribly surprised if the Huskies keep this one closer than the experts think.

Nebraska at Virginia Tech- I’m actually going to this game. I inadvertently married into a family of Hokies 11 years ago and my favorite brother-in-law has been all over me about going to a game with him at Lane Stadium ever since. He’s one of my favorite guys to watch college football with as he’s one of those consummate die hard fans that is highly knowledgeable and all about it. Having recently relocated to the D.C. area I’m all out of excuses this season. We picked this game back in the summer thinking it would be at night. Well it isn’t it’s the same time as the Notre Dame vs. Michigan State game. Damn! All is not lost though I have a work around. I’ll be streaming the Sirius Catholic Channel through my iPhone so that I can listen to the ND Game while I’m inside Lane Stadium watching the Hokies mix it up with Nebraska. I’ll also DVR the ND game so that I can watch it Saturday night and Sunday morning as per usual. In the mean time I’ll get to check out a stadium I’ve never been to and watch what should be a quality intersectional game. I’m really looking forward to seeing what the atmosphere is like surrounding the game. Nebraska travels well and every time I’ve ever seen them I really enjoyed their fans. They are some of the nicest and most knowledgeable fans in all of college football and they also travel in force. I’ve never been around Hokie fans that I’m not related to so I’m not sure what to expect from them. If they are anything like my brother-in-law it should be a raucous crowd. Well see…The Hokies are favored at home but I like Nebraska’s D to hold the anemic Hokie offense in check while Shawn Watson locks horns with Bud Foster. This should really be a great game but I’ll take the Huskers in a close one! Now that I said that the 10 Hokie fans that read this are going to be looking to beat me up at the tailgate!

Florida State at BYU- Here’s to hoping this BYU madness stops this weekend. I’m all over the Noles in this one.

UCONN at Baylor- UCONN will be without the services of QB Zach Frazer heading to Waco. If Robert Griffin and company can knock these guys off they should be 4-0 heading into Big XII play. Is Baylor going bowling? I think so. On the back side they’ll have hell hanging on to Art Briles.

Cincinnati at Oregon State- Thus far Cincy is better than I expected. I keep giving them no credit and they keep proving me wrong. I still can’t take a team seriously that has what appear to be Bearcat scratch marks on their pants. What the hell is a Bearcat anyway? Are they roaming the streets of Cincinnati? I’ll take them in the upset over Oregon State in hopes that by picking them the jinx will apply.

Navy at Pitt- I still like Pitt to win the Big East but they’ll have their hands full at Ketchup Stadium this we
ekend. I really enjoy how the Mids will show up and play anybody and give them a game. I actually bough season tickets for Pitt just to get tickets for the ND game up there. It was cheaper than single game tickets through a broker and I know enough college football fans to give the others away. I gave this week’s pair to my favorite Navy fan. For his sake I hope the Mids pull it out, but it isn’t likely.

Georgia at Arkansas- Is Arkansas for real? I think so. Don’t be surprised if they score a bunch of points on Georgia this Saturday. Remember Ryan Mallett? He’s running Petrino’s offense these days. Interesting…

Texas Tech at Texas- This won’t be a repeat of last year’s miracle in Lubbock. I don’t care that Taylor Potts threw like 20 TD passes last weekend against a high school team either. Texas has had this one circled on the calendar for months and the Raiders generally don’t play too well in big games on the road, especially in Austin. I don't think Crabtree dreamed this one in his mind. The Horn fans will be hostile and the atmosphere alone should make it an entertaining game to watch. Throw in a Mike Leach post game rant about the officials and I’m in.