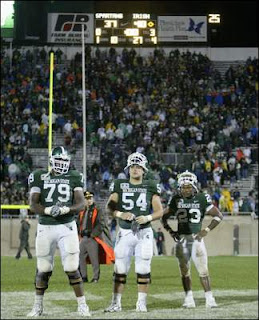 Bad Trade has presented a fine series of questions for this week's Irish Blogger Gathering.

1. Still trying to get the taste of last weekend's game out of my mouth, so let's start with something fun. With Sparty on its way into South Bend, give me your favorite memory of the ND-MSU series. I don't care what it is: John L. Smith losing it, the image of MSU guarding against nothing, an actual game memory, whatever.
It has to be the 2006 game because there are so many parallels between 2006 and 2009 heading into this game. Both teams were coming off of losses to Michigan and both desperately needed wins. The 2006 team managed to get that win in a game that had a little of everything. The first half was abysmal then the comeback started in a 3rd quarter monsoon. There was a fight on the sidelines, Weis ripped some ass to fire up the defense, and Terrail Lambert sealed the deal with a pick six. Then to top it off Javon Ringer and his boys stood around guarding the 50 for no reason and John L. Smith lost his mind and slapped himself across the face in the post game presser. That game will be hard to top. And who can forget this rant? Classic.
2. Since 1997, Michigan State has won 9 of 12 games against the Irish. I view this as a classic case of Sparty having ND's number. What worries you most about Michigan State this weekend?
I always worry about Michigan State and BC. Both of them are the jinx. No matter how bad they are or how good ND is they always seem to show up and give the Irish a game. For this particular game I’m actually less worried about it now that ND dropped last week’s game. The Irish are backed into a corner and have to come out swinging. I think that gives ND a mental edge and that is the aspect of the game I tend to get concerned about the most. As for specifics of the game itself it is all about the line of scrimmage with Sparty. Win the point of attack on both sides of the ball and the Irish cruise. Given that Michigan State won that battle last year this will be a good barometer of just how improved the Irish are in 2009. I expect to see the team step up on Saturday.
3. Between my lingering bad feelings from last weekend and the history of this series in the last decade plus, give me a good reason or two or three to feel optimistic about a change in fortune for the Irish, because right now, I could use some optimism.
Perfect storms happen. Unfortunately for ND they walked into one in week two. To avoid being the most repetitive blogger on the planet this week I’ll just say scroll down through the last couple of posts if you want the full on Whiskey two cents. The short version- time to circle the wagons!
4. As it is my week, I get to address my current ND obsession. Have the last two games changed your opinion/reinforced your opinion re: Charlie in the box versus Charlie on the field?
I honestly don’t think it matters. He can see the field better from the box but the assistant coaches up there that relay him the info he’s looking for anyway. The process is streamlined when he’s up there himself but at the end of the day the head coach should probably be on the sidelines anyway.
5. If nothing else, I can count on one thing to look forward to on Saturday - tailgating. Anyone have a good recipe for me to try? I make no limitations on what it can be - a drink recipe, dessert, appetizer. So long as it can be made on a grill, camp stove, or ahead of time, I am happy to listen. The better the suggestion, the more likely you are to get invited to my own tailgate.
Whiskey’s Green Chile and Jalapeno burgers with salsa.

Throw the onion, green chiles, jalapenos and garlic clove in a food processor and puree. If you don’t have a food processor a blender works too it just takes longer. Once the puree is done add a pinch of sugar to take the edge off and puree it for another couple of seconds. Then add the Tomatoes and Ro-Tel. Puree until all the lumps are gone. You now have salsa that blows the doors off anything you can buy off the shelf. It has a good kick and nice flavor but it isn’t crazy hot.

Back to the food processor. Make the same puree you started the salsa with using the onion, green chiles, jalapenos and garlic clove. Only this time use 1oz vice 2 and be sure to drain the juice off the chiles and jalapenos first. Now add ½ of a beaten egg, salt, pepper and burger seasoning to taste. I like
a quick shot of salt & pepper followed by a healthy dose of the Gourmet Burger Seasoning. Now mix in your puree with the meat. Be sure to mix it in thoroughly. This will give you a nice even flavor and since you pureed it first you won’t have chunks of the veggies in the patties. This makes four ¼ burgers so double/ triple/ quadruple as required based on how many you want to make. Make the patties at home and load them up in the cooler. These have a good southwest flavor but they really aren’t that hot, my kids eat them! If you want more kick then use a little less onion and use all of the remaining 2oz of chiles and penos in the puree.

At the tailgate grill your burgers and top them off with a mild cheddar. If you really want to take it to the next level serve them on a jalapeno cheddar roll vice a regular bun and top them off with a thin tomato slice and avocado. This last part is important. Don’t jack them up by putting something like Ketchup or French’s mustard on them! Use a couple of spoons full of the salsa as your condiment and these burgers will change your life. Take along some corn chips to dip in the rest of the salsa, a few cases of your favorite Mexican beer with some limes and you are in business. If you don’t go with a Mexican beer then any American beer that is yellow works. Don’t mix with anything dark or amber it doesn’t work. Trust me this tailgate feast will change your life. I don’t know much but I know how to watch football and I know how to cook good food to eat while I watch it.

6. Finally, any predictions for the game? I encourage your predictions to involve something other than a final score, but otherwise, I make no suggestions.
I think the Irish are going to come out and play with some resolve. Sparty will show up too and it may be a slugfest for a little while but I really think this team is ready to take the next step. I expect to see a hard fought Irish victory that gets the season back on track.