Share All sharing options for: Week 2 Preview- Play Somebody! 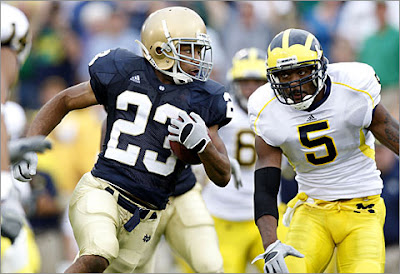 As a whole I don’t think there is much hope that week two will be as interesting as week one. Week one started off with a wild punch out in Boise and ended with a shootout in Tallahassee four days later. Do either FSU or Miami have any defense? In between a the reigning Heisman winner got hurt, there were a handful of early season "upsets" and the Irish opened up with a strong performance. In reality it takes about a month to start getting a decent read on where all the teams really stand but first impressions are first impressions none the less. Week two is riddled with uninspiring matchups as most of the big schools have another round of warmup games on the slate but we do have two big non-conference games in Big Ten country that could be two more stunning blows to the larynx for a conference on the ropes. USC at Ohio State will get the most hype but at my house its all about ND at Michigan! With that here are the games I see as the most interesting this weekend.

Thursday 10 September
Clemson at Georgia Tech- Both of these teams could be in the mix for the ACC title and need to pick up a W in this one to get an early leg up. I saw VT look anemic on offense last weekend, granted against a very good defense, and I’m not sure what to make of Miami and FSU just yet. In short I’m interested to see these other two fringe ACC teams in action. I’ll go with Georgia Tech until someone stops their offense.

Friday 11 September
Colorado at Toledo- I wasn’t interested in this game at all until Colorado got beat up by Colorado State last Saturday. Any chance that "10 wins" Hawkins starts off 0-2? Not likely but not entirely out of the question either. I’ll tune in to see how they bounce back. I’ll give Ralphie the benefit of the doubt for now but a coaching search could be imminent in Boulder.

Saturday 12 September
Central Michigan at Michigan State- I want to get eyes on Sparty before they visit South Bend next weekend and I’m curious to see them defend Dan LeFevour. I’ll give Dantonio the benefit of the doubt but I’m thinking the Chippewas might give them a scare.
Syracuse at Penn State- Will Greg Paulus take Big Ten teams to the wire two weeks in a row? Probably not this one but I’ll probably keep an eye on it just in case. If Penn State has issues here the Big Ten is really in trouble. Mount Nittany might be the last bastion of hope for the conference this season.

Pitt at Buffalo- I made the fatal mistake of picking against Turner Gill last week so I’ll pick against him this week too. That increases the odds that he knocks off the Panthers. It won’t happen but it sure would be cool if it did.

Notre Dame at Michigan- I’ll attempt to keep this relatively short and to the point. Michigan looked pretty good last week, or I should say much better than I thought they would. I thought the drama around the program might crush them but they showed some resiliency last week coming out and playing well in a decisive win against a MAC school. The freshman QB’s put up some decent numbers and the Defense held up well. That said the Irish looked solid in their opener against an opponent that will prove to be a good team as the season goes on. This game is going to be a good litmus test for both teams. Michigan’s freshman QB’s are going to see a defense this Saturday that is considerably faster and more aggressive than the one they saw last week. With that the Irish defense needs to execute their assignments and make tackles when they get to the football. If the Irish defense can play fast, physical and smart they could have those freshman QB’s on sensory overload by the end of the 1st quarter.
On the other side of the ball the Michigan defense also had a good game last week and is coordinated by Greg Robinson who coincidentally beat ND as the HC at Syracuse last fall. Chances are his game plan will be pretty similar this Saturday. To counter Coach Weis has a lot more of his offense at his disposal this time around that Robinson will have to contend with. Those multiple TE sets and a fullback that’s a threat to run make things a little more complicated. At the end of the day Michigan has one very good DE and solid linebackers. If the line can pass protect so that Clausen has a chance to cut them up early it should loosen things up in the middle so that Weis can go to work with his full repertoire. I think Michigan will struggle to keep Tate, Floyd and Rudolph under wraps and I expect to see the "bombs away" approach early from Weis. I’m also excited to see Hughes at fullback. He and Allen in the same backfield could be very interesting. This is a huge opportunity for Michigan who comes into this game with a little confidence for the first time in the Rich Rod tenure which makes them a little dangerous. The Irish need to jump on them early and break their spirit. This is a good early road test for ND and I think they’ll get it done.

Houston at Oklahoma State- I’ll keep an eye on this just to see if the combined score busts 100. Okie State wins in a shootout.

UCLA at Tennessee- The Vols hung 63 on Western Kentucky but Slick Rick might mix it up with them. The UCLA QB play is still pretty shaky so I’ll give the edge to the Vols at home.

South Carolina at Georgia- Neither of these teams looked very good in their openers but South Carolina struggled to score 7 points in an ugly win at NC State. Advantage Dawgs. I want to see the Georgia secondary lay some more licks too. They almost killed Dez Bryant last weekend.

USC at Ohio State- This game might be the true beginning of the end for the Big Ten this year. I expect USC to hammer the Bucks in the Horseshoe. Perhaps Ohio State was "looking ahead" against Navy but I'm not buying
into it. This just isn't a great team and Pryor looks completely uninspired out there. Stand by for the USC love from the WWL on the back side of this one. As a side note now that Bradford is out for a few weeks the WWL needs a new third name for all of their Heisman talk. Will they find a favorite Trojan to latch onto Saturday night?

Purdue at Oregon- Can Purdue score like that against a BCS conference school? Can Oregon recover after the beat down in Boise? I’ll pick the Ducks just because I’m in denial that Purdue might actually be decent.