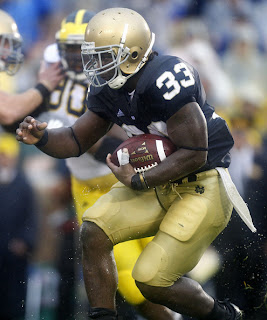 This week's Irish Blogger Gathering is hosted by the total bad asses better known as Her Loyal Sons. HLS does it up right and if you don't follow their blog and their Tweets all week you are truly missing out. Now on to the questions.


1) Being that you're a ND blogger, and thus follow a Catholic university's football team religiously and/or are Catholic yourself, you're probably very familiar with the notion that bad things happen to good people. For a concrete example of that, look to every Irish player, coach, and fan who had to suffer through the last 2 seasons. But never forget that bad things can happen to really rotten people too. For a really fun example of that, look to Rich Rod going 3-9 in his big debut season in Ann Arbor. Now let's mess with your heads a bit: Give me one very good reason why great things might happen to very bad people by explaining to me A) How and why Michigan (sucks!) might beat ND this weekend and B) How Michigan (sucks!) will compete for a BCS berth in 2009.
Tough one.

A) From what I saw Michigan looked pretty good last week. But not good enough to beat the ND team that was in South Bend last Saturday. The only way the Irish lose this Saturday is if they beat themselves. I don’t think that’s likely but it isn’t inconceivable. This Notre Dame team is still a few solid performances away from me feeling totally confident that those days are behind us.

B) On the other hand Michigan to the BCS is not entirely out of the question. Regardless of the outcome this Saturday I would say they have a decent shot at taking the Big Ten. I definitely didn’t think that would be the case prior to last weekend but after watching the conference struggle they really migh have a shot. Illinois and Iowa both looked terrible in their openers. If Michigan had played Ohio State last Saturday I’d say they would have given the Buckeyes a run for their money so that game is no longer an automatic loss. Michigan State is a toss up and right now I’m not real convinced Penn State is that much better than Michigan either. So will they win the Big Ten? The odds are not great but there’s definitely a chance they could be in Pasadena getting their brains beat in by USC this January.


2) After week 1, just as in 2008, the leading tacklers for the Notre Dame fighting Irish are both safeties: Kyle McCarthy with 7 and Harrison Smith with 5. DE Kerry Neal isn't even on the stat sheet, Brian Smith, while making 2 very big plays, didn't make a single other tackle, and Ethan Johnson had 1 tackle all game. Convince me that Michigan (sucks!) wont just run a "9 yards and a cloud of dust" offense against ND all freaking game.
I watched the Nevada game twice and came away thinking most of their success running up the middle had to do with the combination of Nevada being a very good downhill running team out of the pistol, and a lot of missed tackles from the Irish. I also seem to remember McGuffie having similar success against ND last season so Rodriguez will definitely feel it out early to see if its there. So we’ll find out early in the game how that’s going to go. I think as the season goes we’ll likely find out that Nevada was one of the toughest running teams ND will face this year and Michigan will be a drop off this week in that respect. That coupled with a slightly better showing from the front seven this week should get it done.

3) We've now got the concrete data of 1 game to bat around. Aside from any answers involving T'eo, tell me what position changes/depth chart engineering you hope to see the staff at least tinker with during the Michigan (sucks!) game.
Huuuuuuuuggghhhhes. The Coach (my Dad) and I have been talking about Robert playing fullback for two years now. Due to the unfortunate injury to Aldridge he’s going to and from the sounds of it Weis has had this in the hopper for a little while. I have to say that the prospect of Hughes and Allen/ Gray in the same backfield sounds pretty exciting to me. Hughes has the size and is a solid ball carrier with hands. He could be a real weapon there if he’ll pick up blocks and play big. If he can step into that role and excel it could be a major impact for this season and next.

4) The state of Michigan has decided that they've ripped off the Rudy soundtrack long enough and need a new advertising scheme to attract people to their state and support tourism. "Pure Michigan (sucks!)" is so two-thousand-and-late. Give me the new hotness. Give me your best new tourism slogans for Michigan (sucks!).

What’s up there again? All my friends from Michigan are into deer hunting, fishing, the Red Wings and the Wolverines. Strangely they are also all pretty cool beer swilling, blue collar type dudes. Don’t they also have the world’s largest collection of Mastodon fossils? I’m sure I read that somewhere. I’ll go with that.

Michigan- Where all of the Mastodon went to die

Michigan- Home of Jonas Gray who now kicks our asses!

5) Navy took tOSU down to the wire, Washington actually looked like a team that's coached to play football games, WSU put up some fight. After Week 1, do you now feel like the Irish '09 schedule is tougher or easier than you felt heading into last week? Why?

Definitely tougher. Navy is competitive, Michigan looked better than expected in week one, Purdue run ruled a MAC team and Washington didn’t even resemble Ty’s 2008 version. That’s four games that in the preseason I had just about chalked up to automatic W’s that may not be so automatic now. That said I think the Irish take care of business this weekend at the Big House.