Week 1 Wrap Up- Clausen to Floyd

Share All sharing options for: Week 1 Wrap Up- Clausen to Floyd 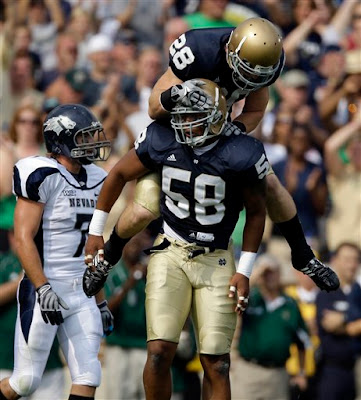 I realize there are still a couple of games on Monday but like the polls OFD waits for no one! Each week I’ll go back and review the games I discussed in that week’s preview and any others that ended up being interesting. I’ll start with the Irish.

Nevada 0 at Notre Dame 35- This was a great opener for the Irish. Notre Dame marched right down the field for six to open the game and never looked back. There were several things I was really excited about.
· No turnovers and only 3penalties in an opener is outstanding.
· Weis did a great job of getting 2’s and 3’s into the game even before the mop up time in the 4th quarter. This team has depth and Weis is doing everything he can to develop all of it. Pretty exciting to watch.
· Was any QB in the country better than Jimmy Clausen this weekend? Not in passing efficiency. Clausen was 15 of 18 for 315 yards and 4TD’s. More TD’s than incompletions is about as good as it gets. The first two TD passes to Rudolph and Floyd were both LASERs and both on 3rd and long. Nice work.

· Michael Floyd had a huge day as well. Floyd is serious, like play on Sundays for a long time serious. Watching him the next few years is going to be really fun. With Tate on the other side and Rudolph at TE they will present several problems for opposing secondaries all season.
· All of the backs that played looked pretty good. A year ago I couldn’t imagine we’d ever see anyone other than Allen or Hughes this year. Now Gray is right in the thick of things and Riddick looked pretty strong as well. We haven’t even seen Cierre Wood yet. Nice problem to have.
· The offensive line looked pretty good overall. In short I’m comfortable with the middle but I’m still not sure about any Offensive Tackle NOT named Sam Young.
· Fitting that the defense pitched a shutout in the first game called by Tah Noo Tah. The D looked a little soft up the middle at times but its hard to say why. If I had to answer that question today I would say it was a combo of the Irish being a little sloppy with the tackling and Nevada actually being a pretty good running team. I think this will look better in the coming weeks.
· As a whole the D got after Kaepernick pretty good, and I expect Tenuta will keep bringing heat like that all season. Immobile pocket passers might have really long days against this defense.
· Brian Smith is a man. I really enjoy watching him play football. I went with the pic of him in celebration of his two sacks. Speaking of serious linebackers….
· Te’o is well on his way to being serious too. He is fast and brings the wood when he gets there. It will be interesting to see how much he plays going forward.
· This was a solid win over all that will look even better 1-2 months from now after Nevada racks up some W’s and Kaepernick starts putting up Playstation numbers.
· Random observation- It seemed like half the team was wearing clear visors. I remember noticing in past seasons that no ND players wore them.
· Offensive Game Ball- Jimmy Clausen. He can share it with Floyd but Jimmy looked great on Saturday.
· Defensive Game Ball- For a shutout the whole D gets it. Nice work.
· Random Game Ball- Coach Weis. The guy has taken a lot of heat the last couple of years but he just keeps working it and the team was ready to go on Saturday. There have been many comparisons in the preaseason to 2005. This team looked at least that good and arguably better yesterday. Here's to hoping they have 12 more performances like that one in them this season.
· *Final thought on Notre Dame. The "soft" schedule looks a little less soft after seeing Navy, Michigan and Washington yesterday.

OK now some quick thoughts on all the other games I kept an eye on over the weekend.

South Carolina 7 at NC State 3- This was a brutal game. Neither of these teams could score and neither really deserved to win.
Oregon 8 at Boise State 19- I was really surprised at how well the Boise St. defense played in this game. Oregon couldn’t do anything. Maybe Oregon is just inept. We’ll probably get a better idea about the Ducks this coming week. The whole LeGarrette Blount punch and subsequent full blown freak out was pretty wild. Was it Thunderlips or Clubber Lang that got dragged away like that in Rocky III? Maybe both of them, I can’t remember. I don't know why I thought of that when I saw it. Random. The only thing between Boise St and the BCS is Nevada. I’ll be keeping a close eye on how that shakes out.

Navy 27 at Ohio State 31- Two big takeaways from this one. Ohio State isn’t that good, and Ricky Dobbs was made to run the Navy offense. Ohio State should be very concerned about USC at this point. That might get ugly in the Shoe.
Georgia 10 at Oklahoma State 24- Okie State was able to get it done but not before getting several bells rung by Georgia D Backs. Bryant is a primadonna.
Baylor 24 at Wake Forest 21- Look at Briles pulling the "upset" on the road. Baylor will be a serious spoiler in the Big 12 South.
Western Michigan 7 at Michigan 31- I made an effort to keep an eye on this one while ND was playing and I wasn’t really successful. I basically tried to watch the QB's run the offense a little. Forcier appears to have a pretty decent grasp of the offense and Robinson turned one fumble into a 50 yard scramble for six with pure athleticism. Granted they were playing Western Michigan but the Wolverines didn’t look too bad.

Missouri 37 at Illinois 9- Large tactical error on my part thinking the Zooker could get the Juice to engineer some points against a traditionally terrible Missouri defense. I didn’t think the Mizzu offense would drop off too much with Gabbert taking over but they appear to be even better than I thought they would be.
BYU 14 vs Oklahoma 13- It didn’t take long for that green offensive line to get exposed. The entire preseason I was continuously amazed that they were appearing in everyone’s Top 5. I really thought they would beat BYU and thought Miami would be their toughest non-conference game. It still may be. On ESPN last night they were discussing "what Oklahoma needs to do to get to the BCS title game now." I couldn’t believe it. They won’t let it go. They aren’t a contender for that this year. Right now they need to focus on next week and be happy if they get Bradford back in time to make a run for a Cotton Bowl bid!
Alabama 34 vs Virginia Tech 24- Ohhhhh the Hokies. VT capped off what was already a bad day for the ACC. The Hokie Defense kept them in it for 3 quarters then they just ran out of gas. I decided last night that VT will never make another title run as long as Brian Stinespring is their offensive coordinator. Despite having 9 returning starters their offense remains anemic. I don’t think they threw the ball up the field once all night. Brutal. Saban on the other hand is serious. Alabama does nothing fancy but they do all of it good.
LSU 31 at Washington 23- Washington looks like a completely different team. They outgained LSU 478-321 and lost the game. Anyone know what the record is for most wins by a team that was winless the prior season? Whatever it is after last night I think Washington might beat it.

Ole Miss 45 at Memphis 14- Jevan Snead finally woke up at the end of the game after a pretty sloppy start. Alabama would have smoke checked them this weekend. The Rebs will need to step it up.
Colorado State 23 at Colorado 17- Opening with a loss to Colorado State won’t be good for Dan Hawkins’ 10 win prediction. I’m thinking the Buffs will have a new coach come next fall.

Longhorn Mike and 5NCS throw your 2 cents in the comments on Texas and Nebraska respectively if you have a minute as I didn't see either of them play this weekend. I’ll be interested to see what your early take is. The quick take on Nebraska from 5NCS last night was that Cody Green and Rex Burkhead could be a factor going forward. Dimes let me know how Florida looked run ruling that high school team they played too. If there is anything noteworthy that I see on Monday I’ll leave it in the comments under this post. Feel free to leave your two cents on any of the games as well. Great opening weekend!