The week in news- Tears, Real Games and a Billboard

Share All sharing options for: The week in news- Tears, Real Games and a Billboard 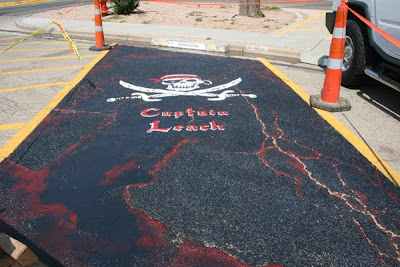 Michigan started the week with a huge distraction when a handful of players tattled on Rich Rod for making them work too hard. When your own players turn you in that says something, and it isn’t something good. I’ll never understand why Rodriguez left West Virginia and right about now he’s probably wishing he had stayed. At the end of the day he’s just too much of a cultural shift for Michigan. When you come in and change everything at a proud program you are telling them that they have been doing it wrong for the last 100+ years. People take stuff like that personally. In many ways Rodriguez at Michigan reminds me a lot of Callahan at Nebraska. The way things are going it will likely end the same way too. To put icing on it he did shed some tears about the whole deal on TV the next day. He then followed that up by getting sued for $3.9 million over a failed condo project in Blacksburg Virginia of all places. Dude had a rough week. With those minor distractions Michigan might be primed for an upset on Saturday. That just might finish him off if it happens.

Jeff Jagodzinski is thought it was worth getting canned at B.C. to interview for the New York Jets head job. He ended up the Offensive Coordinator at Tampa Bay instead and as of today he’s unemployed. Boy that hurts.
I'm watching my second consecutive real game right now! Here are my observations thus far. The new Kenny Chestney song on ESPN is horrible as are all ESPN halftime skits. I love Lou Holtz but that includes the "Dr. Lou" bits too. Neither South Carolina or NC State appear to have any offense at all so that one was a thriller. This Oregon vs Boise State game has been interesting despite being 180 out from what I was expecting. I was anticipating a shootout but instead 13-0 Broncs at the half. Oregon has 0 first downs, 14 total yards and 5:50 TOP. Ouch. At least Oregon succeeded in making their unis even more ridiculous. The "Duck Wing" logos on Oregon’s shoulders are even more over the top than the corrugated steel print they used to have on their shoulders and knees. Regardless I’ve got some beers, real games on TV and the day off tomorrow. Life is good.
The Cotton Bowl will make the jump to prime time in 2011 at Jerry’s house. They appear to be jockeying for position in the event the BCS expands to a plus one.
Fishgate is apparently over so long as Julio Jones and Mark Ingram pay back a charity for the "impermissible benefits" they received. I wonder where they will get the money for that? Both players will both be on the field to mix it up with the Hokies on Saturday night. The NCAA wasn't really going to try and pinch the great Saban over a fishing trip were they? Until they do something at USC they are a sham.
Several teams took hits to their starting lineups in the last few days. Here is a quick breakdown.
Iowa running back Jewel Hampton is out for the season.
Preseason media darling Oklahoma State has had a terrible week. I jumped on this pick too early, UGA might send these guys packing before they even get started. At least they won’t be engaging in the lame pregame handshake this Saturday. Gundy doesn’t play that sportsmanship BS. "I’m a man, I’m forty!"
Tight End Jermaine Gresham am is out indefinitely at Oklahoma. This will hurt. The Sooners have no depth at this position as their backup TE is the starting Center. Lumped on top of having only one returning starter on the offensive line this could be very problematic.
Need tickets to any games in College Station? TAMU is having a fire sale! Oh how things have changed. I remember when they won the Southwest Conference like 10 times in a row.
Texas Tech has come a long way in the Mike Leach era but they still don’t quite run with the big boys when it comes to money. That didn’t stop them from painting up the Dread Pirate’s parking spot pretty sweet.
Throwing this one out there for my regular reader and commenter Dimes. Dude check it out your hero Willie Williams is still out there!
UCLA will play at the Rose Bowl Saturday despite the latest round of California wildfires. If I move back to San Diego next summer remind me not to live East of the 15.
The Herbies are out. As much as I like to bag on Herbstreit he actually does a pretty decent job at this stuff. And he does have the coolest job ever.
On the Irish front, the boys at the WWL think the Irish will end up in the Gator Bowl.
The latest depth chart hit the streets on Tuesday and there was some minor movement in the 2’s. More evidence that the depth is looking good. I can’t wait to watch them play.
Subway Domer and the rest of the Irish Bloggers allowed me the pleasure of joining them on the Irish Blogger Gathering. Domer Law hosted the opening week and threw down some great questions for everyone to tackle. His post has links to all of the others in the comments and if you are interested in my two cents just scroll down. It was very interesting looking at all the different posts, there are several consistent themes.
The biggest "news" surrounding ND the last few days was this billboard that went up this week in South Bend. HLS has all the details and some pretty entertaining commentary on the subject. Short version is former ND 5th stringer Tom Reynolds put up a billboard reading "Best wishes to Charlie Weis in the fifth year of his college coaching internship." OK. The even ballsier part is that Reynolds says he plans to attend the game this Saturday wearing a T-Shirt with the same slogan. What are the odds on Reynolds getting into the stadium before someone throws out "I've got your first amendment right here!" Ballsy, stupid but ballsy.