For starters I’ll say many thanks to the esteemed members of the IBG for inviting me to participate. Wacko at the Domer Law Blog has put forth a great set of questions to kick off the season. So without further adieu….

1. My season preview included music video footage for each position group. What song or video do you feel typifies this year's Notre Dame team heading into the season? Embed a youtube or other similar video if possible.

This team is about to make an entrance back onto the national stage. I'm baaaaaaaaaack!

2. Post a picture that to you portrays the attitude of this year's team and discuss. 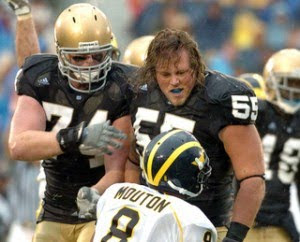 If the entire Offensive Line adopts this attitude it will be a great season. More on that in a minute....

3. What do you perceive as the team's biggest weakness heading into the season?

This is a great question. There was actually a good back and forth about this exact question in the comments under two of my posts last week. I’ll try to combine the best points here. The biggest weakness this team has heading into the season can be best described as knowing how to win. I've also heard people refer what I'm talking about as "believing it." For the most part these are the same kids that got beat up the last two years. I see winning as a mindset comprised of confidence, competitiveness and mental toughness that results in a pure belief that no matter what happens you will still win. These kids have yet to really experience that in college. They want to win and want to compete but they will most likely need to come out on top of a stiff test or two when the chips are down to get over that hump. If they can do that early in the season and start believing it this could be a special season. Conversely if they get their spirits broken early with a heartbreaking loss or two it will be equally difficult for them to overcome. I felt like that's what happened to this team last year. The North Carolina loss started it and the subsequent heart breaker against Pitt finished them off. They never really recovered. That can't happen again!

This is an issue directly tied to leadership on the field from the players themselves. There needs to be someone in the huddle on both sides of the ball that embodies this attitude and brings everyone else with them. On offense that needs to come from the quarterback and someone on the offensive line. It just so happens that Clausen and Olson were chosen as the offensive captains by their peers. That's perfect. On defense McCarthy is the captain but I see Brian Smith as the heart of that unit. If those guys believe and inspire the rest of the team to buy in from the jump it will make the difference this season.

4. With the exception of the 1990s, Notre Dame has won a National Championship in every decade since the 1920s. What are the chances (a) that Notre Dame wins a championship this year, and (b) if not this year, when do you predict the next championship for the Irish?

a) This year the odds are slim but not totally out of the question. Just ask Lou Holtz! In all seriousness if this team can adopt the attitude I talked about above then a 5-0 start and a subsequent upset of USC is not inconceivable. If the team were to pull that off somehow they will be in the mix. So yeah, I’m saying there’s a chance. It’s a very slim chance but a chance nonetheless!

b) I really see this season as a big positive step towards a potentially outstanding 2010. If you really look at the current depth chart there are six players (Aldridge, Olsen, Young, Duncan, Toryan Smith, K Mac) that will exhaust their eligibility this season. Hence my current obsession with the #2 offensive tackles right now. Assuming Wenger jumps back in as the center next season someone will have to step up to fill the two OT’s, FB, MLB and SS spots. Those offensive tackles will be the linchpin in 2010. Romine pushing Duncan at LT right now is huge and I’d almost rather see him take the job now for that reason. Dever, Clelland and Martin will need to step up as well to round out the two deep. The sooner they are ready to play the better. Someone will have to take over at FB and Motta needs some reps this season to prepare to take over at SS. The linebackers are plenty deep so replacing Toryan Smith shouldn’t be an issue. The rest of the starters should be back and as a result I think 2010 has the potential for a title run. It almost sounds absurd to type that in light of the last two seasons but that’s what I think. I don’t specifically remember drinking any Kool-Aid…..

5. Nevada runs the Pistol offense, Navy the Triple Option, and Michigan the Spread Option. Which offensive scheme do you think is the most difficult to prepare for, and why?

As far as schemes go I think the Navy Triple Option is the greatest equalizer in all of college football. It is so effective that you can run it with inferior athletes and still compete. It requires a ton of discipline to defend and eats clock reducing the opponent’s opportunities to score. It is old school but extremely effective. Was Georgia Tech a factor to win the ACC prior to last year? They are now and it is all about this offense.

6. Is Colin Kaepernick the best quarterback we'll see this year? If not, who is?

Jake Locker is better than Kaepernick but as a team Washington is brutal which reduces Locker’s effectiveness. Having thrown that logic out there Kaepernick is probably the most dangerous QB Notre Dame will face as he’s got a decent supporting cast and effectively executes a unique offense. Thankfully the Wolfpack don’t gen
erally tend to have much of a defense!

7. Prediction time. We have to get on the record before the season kicks off. Give me:
(1) Overall prediction for wins/losses. 11-2
(2) Projected bowl game and result. Orange Bowl narrow win over Virginia Tech
(3) Predicted final ranking. 8
(4) Best player on the team. Brian Smith
(5) Heisman trophy winner. Tim Tebow (it’s a popularity contest after all)
(6) National Champion. Florida
(7) Prediction for Nevada game, including score. Notre Dame 37-24