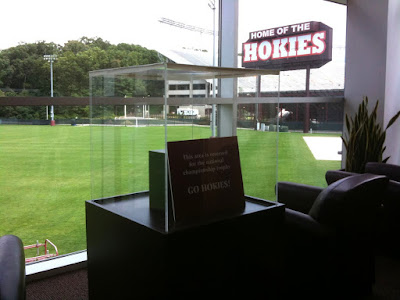 Finally some actual games! My favorite thing about the last few days leading up to the season is that anything and everything is still possible. There will be teams that appear to come out of nowhere and teams with high expectations that quickly collapse. Right now fans around the country are hoping their team falls into the category of the former vice the latter. That said welcome to the first edition of the OFD weekly preview. Each week I’ll take a quick look at the games I am most interested in watching that coming weekend. The Notre Dame game is a given but I do try to watch as many games as possible every week though I naturally tend to stop paying attention to everyone else while the Irish are on. I will be traveling to a few games this year but I wanted to take in opening weekend at home. As much as I love going to the games there is a lot to be said for your own living room, multiple TV's, good food, your own case and no lines for the bathroom! As previously mentioned here is a link to the TV Schedule for the week. There are a lot of really uninspiring matchups in week one as the national schedule is littered with what really amounts to warmup games for the majority of the big programs. Despite that lame fact of reality there are a quite few games that look like they will be worth watching on opening weekend. Feel free to leave comments with your two cents and best of luck to all of your teams this weekend.

Thursday 3 September
South Carolina at NC State- I think Spurrier will get dealt another opening day loss by an up and coming Wolfpack squad.
Oregon at Boise State- Both teams got hit hard by graduation and Chip Kelly will make his debut as Oregon’s Head Coach in a tough place to win. Oregon QB Jeremiah Masoli has vowed to avenge last season’s loss to the Broncos but I like a better coached Boise State to win a shootout on the smurf turf. That said Boise State doesn’t play another pseudo formidable opponent until they host Nevada November 27th.

Saturday 5 September
Navy at Ohio State- This might be entertaining for a half but the Buckeyes should put this one away early.
Georgia at Oklahoma State- This has the potential to be the best game of the day. I’ll give the Pickens Plan the benefit of the doubt but I’m highly interested to see how their hype machine offense moves the ball against the Georgia D. That will be a good indication whether the Cowboys are a contender or a pretender.
Baylor at Wake Forest- I was talking to 5NCS tonight and he thinks Robert Griffin is the most underrated player in college football. He might be right. Most think the Wake D will be able to contain him but I don’t. I’ll take the Bears in an upset.
Western Michigan at Michigan- I’ll be keeping an eye on the Michigan three headed QB monster. If they can’t run wild on the Broncos the Rodriguez experiment will be dealt yet another blow. The Wolverines also have the added distraction of their latest drama to contend with this week. This game might get interesting as a result.
Nevada at Notre Dame- I hit this one up last week in my Notre Dame Preseason Preview. In short Nevada will be a good 1st opponent for the Irish defense and will probably make me a little nervous here and there but the ND offense should be able to throw the ball at will against these guys. This should be a 14 point win for the Irish.
Missouri at Illinois- Mizzu got hit hard by graduation and Illinois has the meat of their offense back. That said the Mizzu offense with Blaine Gabbert at the helm probably won’t drop off much as that system is built to plug and play similar to Texas Tech's. Neither team has much defense so I’ll take the Illini in a shootout.
BYU vs Oklahoma (Dallas)- Oklahoma should cruise in this one. I’ll be tuning in to watch their Green O-Line very closely.
Alabama vs Virginia Tech (Atlanta)- This might be one of those 10-7 type games. Both teams should have great defense but I’ll give the nod to the Hokies. This should be the best team Beamer has assembled in the post Vick era and they badly want to fill the empty trophy case they keep for the Coaches Trophy in the Merryman Athletic Center. I snapped that picture of it a few weeks ago when my brother-in-law was giving me the big tour. They believe.
LSU at Washington- I’ll watch this just to check out Sarkisian’s debut but LSU should cruise.

Sunday 6 September
Ole Miss at Memphis- The Rebels should roll in this one but I want to get eyes on the SEC’s other preseason media darling.
Colorado State at Colorado (Denver)- The Buffs should definitely win this game but I want to see their new offense in action. Or perhaps inaction.

Monday 7 September
Cincinnati at Rutgers- This game is pseudo interesting. Last year’s Big East Champs against the team Phil Steele thinks is going to win it this year. I’m thinking that 1 returning starter on the Bearcat D spells doom for Cincy but I’ll keep an eye on former ND quarterback Demetrius Jones playing OLB.
Miami at Florida State- This is a very interesting way to end the weekend. I’m pretty high on both of these teams. FSU is a sleeping giant and I think Miami is ready to turn the corner. I’ll give the nod to the Noles but in reality I think this one is a toss up. It should be a hard hitting game that is fun to watch. After watching Oklahoma’s OL on Saturday night I’ll be paying close attention to the Canes front seven in this one.