The week in news- Unis for Sale, Pirates over Texas and Irish Captains

Share All sharing options for: The week in news- Unis for Sale, Pirates over Texas and Irish Captains 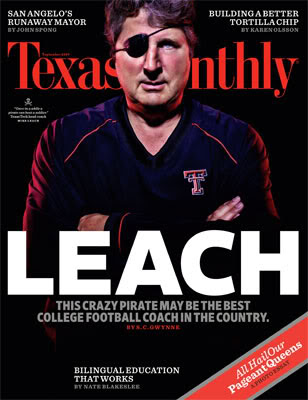 Nebraska is going to wear some pretty sweet throwback unis on Sept 26th against Louisiana Lafayette. If you have an extra few thousand bucks you can score one in the auction!

Opening weekend is only two weeks away and in an effort to start things off real nice and friendly the NCAA is encouraging schools to start their opening games with team wide handshakes on the field prior to kickoff. I'm all for sportsmanship but this is lame.
Earlier this week it was reported that Florida is a 73 point favorite against FCS Charleston Southern in their opener. Dr. Saturday got to the bottom of it and discovered it is really only 63 points. Sucks to be Charleston Southern, but it should get young Tebow off to a rousing statistical start.
The SEC went back and forth this week on what fans would be allowed to do with their smart phones and other electronic devices during games. They started out by "Banning" social media (Facebook, Twitter etc.) then flipped back and just banned the posting of video. So much for my master plan to webcast SEC games with my iPhone.
Boone Pickens took some time out this week to check out the new digs he paid for at Oklahoma State. Boone is my hero. I want to be just like him when I'm 81 years old.
So it turns out this deal where Bryce Brown spent his recruitment under the wing of this shady pseudo agent guy caught up to him sooner rather than later. Details are still forthcoming but from the sounds of it he’s ineligible for now. Tough break for Kiffin and the Vols having their prized recruit out of the mix indefinitely. Hopefully the parents and guardians of current high school recruits are paying attention.
There is a great article out of Omaha talking about the greatness of both Tim Tebow and former Husker QB Tommie Frazier. Tebow had some great things to say about Frazier and Nebraska in the piece.

"I watch that Fiesta Bowl (1996 win over Florida) game two or three times a year,'' Tebow said. "In fact, I just watched it a couple weeks ago. At the time, it made me cry because they were beating my team.
"But I love watching that run. What did he break, like, 27 tackles? Watching that game gets me going. It's an example of how you play the game. I loved all the Nebraska quarterbacks. I loved how they played the game, with their toughness, their leadership.
"Tommie was the best one of them all. He was a great runner, he could throw the ball, he was gifted athletically, tough, great leader. He played the game the way I wanted to play it.''

Interesting that he watches that 96' Fiesta Bowl that often. Tebow has always come across as a really great kid. As a result of that and his homage to Touchdown Tommie I'll give him a break on these beefcake pictures.
Mira it isn't Mack Brown! The Dread Pirate Mike Leach is on the cover of the September issue of Texas Monthly magazine. For those of you unfamiliar with the inner workings of all things Texas this is in fact a big deal for a couple of reasons. For starters Texas Monthly generally pays tribute to Texas football heroes every September. The fact that it is Leach vice say.... any Longhorn heading into this season is big. Not to mention Texas Monthly is everywhere in Texas and Horn fans across the state having to pull this bad boy out of the mailbox and see it displayed on newsstands is like Kryptonite to them after the upset in Lubbock last season. It will be interesting to see how many Horn fans are waving defaced versions of the magazine around in the stands when Leach and the Red Raiders travel to Austin on Sept 19th. The actual article is the standard collection of random Leach quotes and entertaining tidbits but my favorite is one he gave to a reporter following the 49-45 loss to Oklahoma State that led to Leach Firing DC Lyle Setencich.

"The entire first half we got hit in the mouth and acted like somebody took our lunch money and all we wanted to do was have pouty expressions on our faces until somebody daubed our little tears off and made us feel better."

Classic. In addition to getting trumped by Leach in the state magazine the Horns also lost their 3rd Tight End for the season earlier this week. Then they lost their fourth one too. This isn’t good for my preseason predictions!

On the Notre Dame front South Bend has remained relatively quiet and uneventful which is good. The team captains were announced late last week and Quarterback Jimmy Clausen will be joining Center Eric Olson, Safety Kyle McCarthy and Linebacker/ Special Teams Guru Scott Smith. This is a very positive and a great indicator of Clausen’s development. Notre Dame also announced plans for an improved football weekend experience in 2009 which HLS handled far better than I could. I'll be interested to see how it plays out in person. A final entertaining tidbit on the Irish is this Geico commercial spinoff featuring AD Jack Swarbrick and Safety Sergio Brown. Two more weeks!