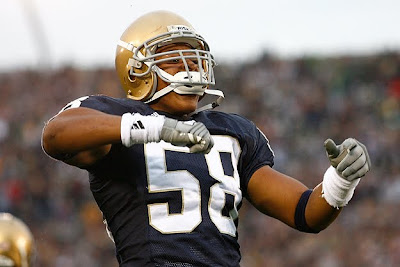 In the Spring I explored the question of whether or not the quality depth I was expecting to see on the field for the Irish in 2009 was actually there. What ensued was a series of posts on each position group and in every case I came to the conclusion that the quality depth I’m expecting to see in 2009 does in fact exist. The original series of posts can be found HERE or in the right sidebar under "OFD Greatest Hits" and the current depth chart can be found HERE. I had originally intended to completely redo those posts here before the season started but as I started looking at it I decided that instead of a follow up series I’m just going to hit you with all the updates at once.

Defensive Line
There have been no real developments for the defensive line as the two deep remains unchanged thus far and there are no true freshmen in the mix. This group is young, very athletic and overall the 2 deep looks solid. With the improved coaching from Randy Hart and Bryant Young this group has the potential to be very disruptive in 2009. If the defensive line plays well it will be trouble for opposing offenses as the rest of the defense has the potential to be exceptional.

Linebackers
Coach Tenuta’s Linebackers remain a group that I am very excited about. Most teams would be ecstatic to have the 2’s and 3’s starting for them. Nowhere else on defense is this team deeper than it is in the linebacker corps. Thus far in camp there are only two new developments. Brian Smith is officially listed back at Will and Manti Te’o is looking like he just might be all he was cracked up to be. Te’o is currently listed behind Brian Smith as #2 at Will with Anthony McDonald at #3 but Te'o will get time one way or another. Steve Filer and Darius Fleming are in the mix with Scott Smith at Sam and all three of those guys will duke it out and I expect to see all three of them on the field at different times. Senior Toryan Smith is still listed as #1 at Mike with David Posluszny listed as #2. Freshmen Dan Fox and Carlo Calabrese are on campus as well but I don’t expect either to see action this season in favor of retaining a year of eligibility. I’m really excited about the future of the linebacker corps which should be one of the best units in the country for the next few years. In reality I think Tenuta will jockey these kids around to get the 3 best kids on the field for given situations and Brian Smith’s ability to play both inside and outside will give him the flexibility to do just that. Regardless of which linebackers are on the field in a given week, or given series, they will pose plenty of problems for opposing offenses. This is arguably the best group of linebackers that Tenuta has ever coached and the possibilities associated with that thought are pretty awesome.

The Secondary
The Corners and Safeties are also a strength as the starters are outstanding. The only real developments are Darrin Walls jumping back into the starting lineup at right corner and Freshman Zeke Motta moving back to Strong Safety from Sam Linebacker. I expected Walls would reclaim his starting role I just wasn’t sure if he would bump R.J. Blanton or Raeshon McNeil. As of now it looks like it will be McNeil who is now #2 to Blanton at left corner. Walls is being backed up by Jamoris Slaughter at right corner and Gary Gray is back in the mix as well. Freshman E.J. Banks will most likely retain a year of eligibility if everyone stays healthy. Kyle McCarthy and Sergio Brown are both great options at Strong Safety and I expect Sergio will see most of his time as the Nickel Back. Freshman Zeke Motta also needs some reps back there to set him up for success when he takes over in 2010. At Free Safety Harrison Smith is settling into his natural position with Dan McCarthy as #2. Overall the secondary will be very solid in 2009 allowing Tenuta to bring steady doses of heat up front.

Offensive Line
There are two major points of interest on the offensive line as we enter the home stretch of fall camp. Eric Olson moved over from Left Guard to Center, Chris Stewart moved from Right Guard to Left Guard and Trevor Robinson takes over full time at Right Guard. Enough Gards in one sentence? This puts the 3 best interior linemen on the field and bumps Dan Wenger to #2 at Center after starting last season. This gives new OL coach Frank Verducci some flexibility for substitutions and filling in as required due to injuries. The other major point of emphasis is that for the first time in the Weis era the offensive line is actually 3 deep! With Paul Duncan and Sam Young listed as the starting tackles I’m still curious to see how Taylor Dever, Matt Romine and Lane Clelland look when they make appearances at Tackle. This line has been the subject of some serious criticism the last couple of years and I’m ready to see them step up in 2009. They are truly the linchpin heading into the season.

Tight Ends and Wide Receivers
At Tight End Kyle Rudolph is as legitimate as they come and I’m hoping that Mike Ragone realizes his potential as well after sitting out last season with a knee injury. Losing Joseph Fauria in the off season hurt the depth here but walk on Bobby Burger has received high praise from Weis specifically as a blocker. Those two front line TE's and Burger should make the 2TE set that is critical to the Weis offensive scheme readily available again in 2009. Weis has also commented that Freshman Tyler Eifert is coming along as well so the depth here should be workable if everyone stays healthy.

Like the Linebackers the Receivers are legitimately 3 deep with 2’s and 3’s that would be starting for most other programs. Golden Tate and Michael Floyd are true front line receivers and several other players will likely get into the mix in multiple receiver sets and in relief of Tate and Floyd. Duval Kamara is going through a setback with a knee issue and will be challenged by Robby Parris, Deion Walker, John Goodman, and freshman Shaquelle Evans to retain his spot on the depth chart when he returns. All of those guys are solid options. Weis recently compared Evans to Tate speed wise and added that Evans came in a more polished receiver. That’s a little scary in a good way. The short version is that if the offensive line can hold up their end of the deal this crew of tight ends and receivers are going to be very challenging for opposing defenses to keep under wraps.

The Backs
The only major post spring change amongst the backs lies with Quarterback #3. Evan Sharpley returned for a 5th year and Nate Montana temporarily transferred to a community college to get more live reps vice sitting #4 on the depth chart. Starter Jimmy Clausen was recently elected as one of the offensive captains which says a lot about his development. Clausen is primed for a big season and should have it. Meanwhile Dayne Crist should have some opportunities to get time this season which will help his continued development as the heir apparent and Sharpley is a very experienced 3rd option if he’s needed.

James Aldridge has officially moved to Fullback which is also huge for the Weis scheme and I can’t wait to see him in action there. I’ll be interested to see if one of the other running backs follows suit in the spring. At Halfback Armando Allen remains #1 but we will also likely see a lot of Robert Hughes and possibly Jonas Gray. Based on the early showing from freshmen Cierre Wood and Theo Riddick the
y could also potentially get in the mix and add even more depth.

Overall this team absolutely has quality depth across the board and the linebackers, receivers and offensive backfield have exceptional depth. Strictly from a talent stand point the Irish head into 2009 amongst the most talented teams in the nation. I’m a big believer in the fact that there is a direct correlation between talent an on field results. Thanks to the efforts of the coaching staff the depth chart is topped with a very talented group of players backed up by very talented understudies. This creates a healthy situation that gives players the opportunity to develop properly and truly compete for positions which improves overall performance and facilitates smooth transitions from season to season. There is still much left to prove on the field but I feel better about this roster than I have since Holtz was still on the sidelines. I’ll wrap up my 2009 preseason preview in the next couple of days with my take on how I see the season playing out for the Irish. After that I’ll be about ready to watch and discuss actual games!