The week in news- Injuries, Wolverine Drama and Montana Stirs the Pot

Share All sharing options for: The week in news- Injuries, Wolverine Drama and Montana Stirs the Pot 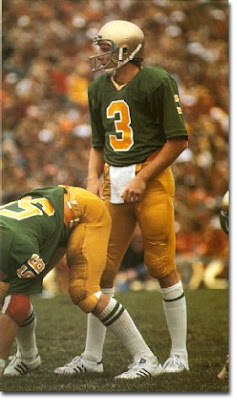 It has been a busy week in my world away from college football and it is nice to have a minute to sit down and catch up on the week in news. Without further adieu.

Camp is in full swing around the country and the reports are starting to flow about various players getting banged up. Of the many injury reports that I saw this week these caught my attention due to the associated story lines and potential ripple effects.

USC QB Aaron Corp entered fall camp as the starter ahead of true Freshman Matt Barkley but cracked his fibula on Monday. Barkley will no doubt make his case to be the starter over the next couple of weeks with Corp out. If Corp is back in action two weeks from now I like his chances to reclaim his spot. Starting a true frosh at QB is rarely good regardless of how talented the kid is.
Virginia Tech running back Darren Evans is out for the season with a torn ACL. Evans was the Hokies workhorse last season as a Freshman. Fortunately for VT the Hokies have some quality depth at this position and the tandem of Freshmen Ryan Williams and David Wilson will likely do just fine behind a very veteran Offensive Line.
Texas Tech running back Baron Batch is out for 5 weeks with an undisclosed arm injury. The interesting part was that when I was looking for additional info I found out just how much of a priority a running back has in the Leach Offense. I found more information on the Texas Tech Women’s Football Clinic than I did on the Batch injury. As for the 246 pictures from said clinic they are truly a sight to behold. Cougars.
Ohio State Linebacker Tyler Moeller will miss the season due to a head injury that he sustained when he got jumped during a family vacation. That sucks! Best of luck to Moeller on a speedy recovery. Someone send out some plates full of hot death to the perpetrator.
Notre Dame Wideout Duval Kamara had his knee scoped this week and will likely be out for two weeks. As in the Corp case this creates an interesting opportunity for several members of a deep receiving corps. I’ll be interested to see if Deion Walker, Robby Parris, or John Goodman can make a play for the 3rd spot behind Tate and Floyd in Kamara’s absence.
Switching gears...
Apparently Norm Chow left USC because Pete Carroll took away his play calling duties. Really? Don't get me wrong I have always considered Carroll to be Switzeresque in his shadiness but I always thought he was a pretty smart football coach. Taking play calling duties from Norm Chow in an effort to retain Steve Sarkisian and Lane Kiffin falls into the wide right category. Wide right as in missed the ball completely, lost your footing and landed on your back.
The economy isn't an issue for Urban Meyer. Florida locked him up with a new 6 year deal worth $24 million. By the way that Risky Business SI cover is classic. I wonder if Kiffin had it blown up into a 24 X 36 and hung it in the locker room yet?
In the spirit of getting some cash Ron Prince continues to duke it out with K-State in an effort to shore up his retirement on the back side of the only head coaching job he will probably ever have. I need to find someone that owes me some punitive damages.
Rich Rodriguez can't catch a break. He's 3 weeks out from starting his second season and has a player get tossed out of school over a botched coke deal. In addition to having kids he recruited playing Menace II Society on campus he now has yet another couple of transfers in the hopper and has to be wondering when it will stop. At least he can now find sanctuary in the Michigan "Taj Majal."
The Sporting News ran an interview with Joe Montana this week titled "Notre Dame should lower expectations." Naturally this has created some discussion and debate amongst the Irish faithful. The Rock posted a strong rebuttal to the idea that ND should lower their standards and Her Loyal Sons has a well thought out take on the article as a whole. I actually agree with both of their perspectives. Nice work all around. From my perspective, anyone can take a few snippets of an interview, slap a "controversial" title on top of it and generally slant the whole piece to have a meaning that perhaps was never intended by the interviewee. Is that what happened here? We will probably never know but in my opinion it really doesn't matter too much in the grand scheme of things. It could be used by other programs as a negative recruiting tool but there's always something that can be used in that regard. The truth is if Weis and company take care of business on the field this season, which they should, this whole discussion will become a moot point. At least for the time being. The Irish are truly at a culmination point this season with large scale ramifications on the line that could ripple well into the future. If this team succeeds on the field this recruiting class will shore up quite nicely, and the program will be primed to compete at the highest level moving forward. Conversely if the wheels come off, the recruiting class falls apart and the administration punts the subsequent coaching hire to the moon the exact opposite could be true. We will all probably have a good idea which direction it is trending by the end of the night on October 17th.