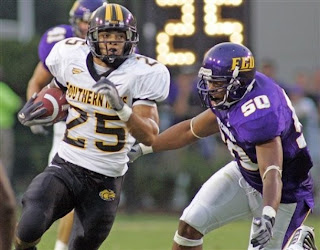 Conference USA will be the best Non-BCS conference in 2009. There are a handful of dangerous teams in the league this year that will push each other in conference play as well as some BCS conference foes in non-conference games.

CUSA East
Southern Miss- The Golden Eagles are my most likely BCS Buster in 2009. Larry Fedora enters his 2nd season with 19 returning starters on a team that finished hot in 2008. WR DeAndre Brown is a true stud at WR that Southern Miss needs to bounce back from a broken leg suffered in the 2008 New Orleans Bowl. Talent wise Brown is in the same league as Julio Jones, A.J. Green and Michael Floyd but flew under the radar a bit as a freshman due to playing in a smaller program. Brown is critical to this pass happy offense making a run. Overall Southern Miss has by far the most talented roster in CUSA and plays both Virginia and Kansas non-conference. I think they’ll beat UVA and have a wild shootout at Kansas. In conference play I think East Carolina is the only team with enough guns to give them a run for their money. This team is absolutely capable of finishing with 11-12 wins and busting into the BCS.

East Carolina- Skip Holtz is a solid coach with 16 returning starters. The Pirates have 3 tough non-conference games with West Virginia, North Carolina and Virginia Tech. I don’t see them winning all 3 but if they can upset two of those teams and knock off Southern Miss in the closer that could give them enough momentum that they could slide into the BCS with a win in the conference championship game. The Southern Miss game will be a fun one to watch with a lot on the line for both teams.

Marshall- The Tundering Herd have 16 returning starters and should be bowl eligible for the first time since 2004. Don’t expect any miracles like 10 wins but they should be back to being fairly competitive.

Memphis- The Tigers have only 12 returning starters from a team that won 6 games in 2008 and have a tough non-conference slate with Ole Miss and Tennessee. Memphis will be lucky to hit 6 wins.

UCF and UAB have 18 and 15 returning starters respectively and are both coming off of 4 wins seasons. They both have the potential to be competitive in conference play.

CUSA West
Houston- Kevin Sumlin enters his 2nd year with a team built for shootouts. The Cougars return 8 starters on offense to include QB Case Keenum. Keenum is serious and they will likely average over 40ppg again. The defense returns only 4 starters from a unit that gave up 30ppg in 2008 so the Coogs will get into a shootouts on a weekly basis. Non-conference tilts with Oklahoma State and Texas Tech in September could both bust 100 total points.

UTEP- Mike Price hasn’t gone bowling in 3 years but he should break the streak in 2009. The Miners have 15 returning starters and should be competitive in conference play. They’ll drop games to Kansas and Texas in September but 8 wins is possible.

Tulsa- Todd Graham lost OC Gus Malzahn and only returns 5 starters on offense so 47ppg won’t happen again in 2009. That said he’ll run the same system and will still score regularly. The total wins will be contingent on a defense that returns 8 starters from a unit that allowed 28ppg in 2008. Tulsa is also capable of winning 8 games in 2009.

SMU- With 16 returning starters on a team that only won 1 game in 2008 this will be an interesting year to keep an eye on June Jones at SMU. Will he turn them around like he did Hawaii? This year will tell us a lot.

Rice and Tulane both have 13 returning starters and are coming off opposite seasons. The Owls were 10-2 while the Green Wave was 2-10. The Owls will continue to be competitive and the Green Wave will be better but not bowl eligible better.

Wrap Up- There shouldn’t be any real cakewalk games in CUSA in 2009 but I think Southern Miss has a very realistic shot at being a 2009 BCS Buster. To get there they will have to go through a tough ECU squad that will be hot on their trail. The winner of the Southern Miss vs. ECU game will likely face Houston in the conference title game with a shot at the first ever CUSA BCS appearance on the line.