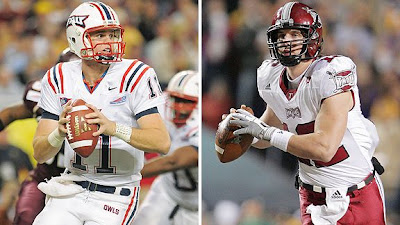 The Sun Belt is similar to the MAC only smaller. Heading into 2009 the conference has two pretty good teams in Troy and Florida Atlantic, two decent teams in Middle Tennessee and Arkansas State, and 5 teams that have been door mats but a couple of those look like they might be a little better this year. Let’s take a look.

Troy- The Trojans pick up a lot of SEC scraps in recruiting and have a pretty good squad as a result. They are by far the most talented team in the conference and despite the fact that they have only 12 returning starters I think they’ll win the league again this season.

Florida Atlantic- Head Coach Howard Schnellenberger lost OC Gary Nord to Purdue but promoted Daryl Jackson from within so the system should stay on track. For a school that has only been playing football since 2001 the fact that the Owls are as good as they are is pretty amazing. QB Rusty Smith will put up Play Station numbers again this fall but only 3 returning starters on defense could be problematic.

Arkansas State and Middle Tennessee State- Both these teams fit the same mold as the next three with a lot of returning starters and 5-6 wins in 2008 but similar to Troy they both have pretty decent talent compared to the rest of the conference. That elevates them slightly above the middle of the pack.

Louisiana, Louisiana Monroe and Florida International all fit the exact same mold. Each has 15-17 returning starters on teams that won 4-6 games last season. They will all knock each other around again and welcome North Texas to a similar level of play.

North Texas- Todd Dodge came to UNT from down the road at Southlake Carroll as the next "it" coach from the Texas High School ranks three years ago. Dodge had won 4 of 5 Texas State High School Championships, sent Chase Daniel to Missouri and even taught Gary Pinkel his offense. Most thought he would follow a path similar to Art Briles but it has yet to materialize as Dodge is just 3-21 after two seasons. Heading into 2009 the Mean Green have 16 returning starters and Riley Dodge takes over at QB. I like the Mean Green to make the jump in 2009 and get back above .500. If it doesn’t happen Dodge might be headed back to High School.

Western Kentucky will be playing in the FBS for only the second year and will continue to struggle.

Overall the Sun Belt remains a smaller version of the MAC with a tad more athleticism. You will rarely see any of these teams outside of early season "buy" game appearances against BCS conference schools. Keep an eye on the top of the conference to help with your bowl picks in December.