Share All sharing options for: OFD 2009 Preseason Preview- The MAC 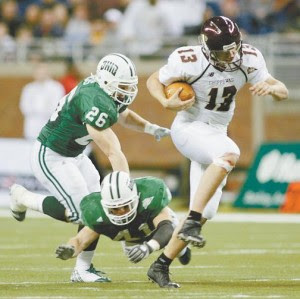 The MAC is essentially the JV of the Big Ten and suffers from the same deficiency as its big brother. Speed. The MAC has the lowest ranked raw talent of any FBS conference in the country. The MAC is probably best known for being on the other end of the "Buy" home games that several big programs use to give themselves 7 to 8 home games during the season. As a result 4 of 6 teams in the MAC West play 7 road games and only two teams (Buffalo and Miami) don’t have a road game against a team from a BCS conference. Heading into 2009 the recurring theme of the conference is experience on the heels of a rough season. Of the 13 teams in the MAC 8 of them have 14 or more returning starters in a league that averaged a paltry 5.7 wins per team in 2008. The MAC doesn't win many of those "buy" games.

MAC West
Central Michigan- With 16 returning starters to include QB Dan LeFevour the Chippewas should reclaim the league championship in 2009. They do have non-conference tilts with Arizona State, Michigan State and Boston College which will give LeFevour a chance to show his stuff against BCS conference competition. I could see the Chippewas potentially upsetting BC.

Toledo- The Rockets were a solid bowl team from for several years but haven’t been since 2005. I think they’ll get back on track this year with 16 returning starters to include the entire offensive line and QB Aaron Opelt.

Western Michigan- The Broncos have been pretty decent the last few years and put up 9 wins last season. With 7 starters back on offense to include 4 offensive linemen and QB Tim Hiller they will continue to put points on the board. Three returning starters on defense will cause them some problems but they should still put together 7-8 wins.

Ball State- The Cardinals lost 7 offensive starters and Head Coach Brady Hoke in the off season. They did promote Stan Parrish from within so the transition should be relatively smooth. The Cardinals only have one BCS conference opponent in Auburn which will help their quest for bowl eligibility. They will also end up on the bubble like Northern Illinois.

Eastern Michigan- The Eagles only won 3 games in 2008 but do return a league best 17 starters. Ron English steps in as the Head Coach and could spark the Eagles to bowl eligibility.

MAC East
Ohio- I have a soft spot for Head Coach Frank Solich who got run out of Nebraska following the 2003 season. Solich has 14 returning starters and I like the Bobcats to win the East.

Buffalo- Former Nebraska QB and coach Turner Gill will duke it out with his old boss for the East title. The Bulls won the league last year with 4 of their 8 victories coming in overtime. The Bulls aren’t flashy and on paper really should not be expected to compete for another league title but Gill is the kind of coach that just might pull it off.

Akron- The Zips have been struggling for the last several years but with 15 returning starters they could go bowling for the second time in school history.

Bowling Green- The Falcons were pretty decent in the early part of the decade but have slipped the last four years. They have 10 returning starters and a new coach in Clave Dawson from Richmond.

Temple-The Owls won 5 games last season which was the first time they had won more than 4 since 1990. They have 15 returning starters and it would be huge for them to get into a bowl game. I think they have a decent shot.

Kent State-The Golden Flashes also have 15 returning starters on a team that has also been really bad for a really long time.

Miami-The Redhawks have a new Head Coach in Mike Haywood who was the OC at Notre Dame last year. Haywood has 12 returning starters to work with and I’ll be most interested to see how much of the Weis offense he uses.

Overall the West is a relatively evenly matched division that is significantly stronger than the East. All 6 teams in the West should be able to compete with one another. The East really has 2 decent teams in Ohio and Buffalo and 5 pretty bad teams with a hint of potential. As a whole the conference will take its lumps from BCS schools to raise money then proceed to beat each other up as well. I expect to see Western Michigan win the conference but improving the conference average of 5.7 wins a year ago will be difficult.