The week in news- Bad Movie, Top 25 and Weis lays it down

Share All sharing options for: The week in news- Bad Movie, Top 25 and Weis lays it down 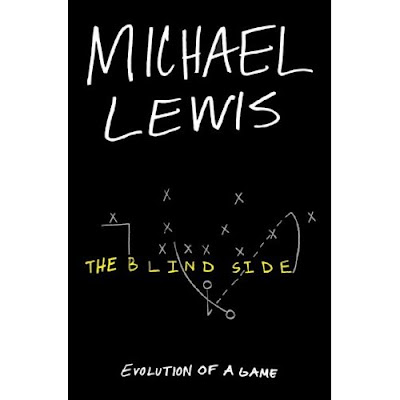 There is a lot going on in college football this week with camps kicking off etc. but here is the rapid fire version of what I found most interesting.

I have said before that I am a huge fan of The Blind Side: Evolution of a Game by Michael Lewis. Any football fan would love this book. In the book Lewis expertly weaves two very interesting stories together relating to the "evolution" of the Left Tackle position. The first is the Story of Michael Oher. Oher was a disadvantaged teen taken in by the very affluent Toohey family, found football and ended up becoming a great Left Tackle. The more fascinating story in the book is where he explains how the ongoing chess match that Bill Walsh and Bill Parcells had with one another in the NFL evolved into modern day offense and defense. For any football geek that knows anything about how prevalent the Walsh and Parcells coaching trees are in modern college and pro football that portion of the story alone is well worth the price of the book. That said the movie trailer is on the street and appears to focus on primarily on how Mrs. Toohey, played by Sandra Bullock is a saint. Nice job. Way to take a potentially awesome football movie and turn it into something completely lame. The only thing in the movie that might actually be interesting is watching Nick Saban and Phil Fulmer play themselves.
Speaking of Nick Saban I was wondering how he was going to whittle his scholarship players down to 85. No surprise he pulled it off. Someone should track down all these grayshirt players etc. and get the real scoop.
Jim Harbaugh actually called out the other conferences for scheduling a bunch of weak non-conference games. He actually has a very valid point. We is Notre Dame has a great post about it.
There is a very interesting post on Barking Carnival about the SEC TV deal and what it means to the Big XII. In reality though it really parlays into what it means for the entire country. This deal they signed might be a game changer on several fronts. Hats off to the SEC on this one it is impressive.
The preseason USA Today Coaches' Poll is out. No Big East teams made the Top 25. More fanning of the flames. I don't like preseason polls in general but it's semi-interesting to take a look at.
Charlie Weis had his opening presser today and it was highly interesting. There is a great summary on The Rock Report and the full transcript can be found HERE.