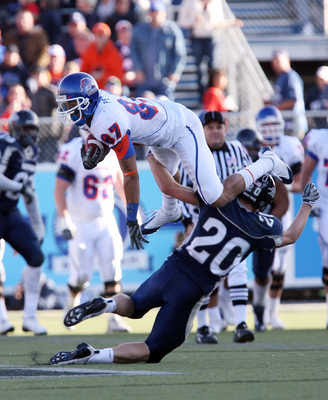 Heading into 2009 The WAC looks similar to the Mountain West but is not quite as strong overall. Nevada and Boise State are potential BCS Busters while Fresno State, Louisiana Tech and San Jose State should be competitive. After that the bottom drops out.

Nevada- The Wolfpack have 14 returning starters to include QB Colin Kaepernick who ran for almost 1300 and threw for almost 2900 in 2008. He is a legitimate threat. The Wolfpack will open as underdogs at Notre Dame in what will be the biggest game in the history of their program. I think they will be over matched by the Irish but won’t be in danger of losing again until they travel to Boise for the finale Nov 27th in a game that may catapult the winner into the BCS.

Boise State- The Broncos are another media darling that is very well coached. Chris Peterson does a great job with this team. They return 6 starters on offense to include 3 offensive linemen. They also have RB Jeremy Avery who really split time with Ian Johnson in 2008. They will most likely continue to put up 35ppg. The defense returns only 5 starters with 2 on the front 7 and 3 in the secondary so Boise State will likely have more difficulty controlling the line of scrimmage and getting off the field. The only real threat on the schedule non-conference is Oregon in the opener. Like Utah the Broncos need to beat the Ducks to set themselves up prior to hosting Nevada Nov 27th.

Fresno State- Pat Hill has 15 returning starters and will likely finish with another 8-9 win season. The Bulldogs play Wisconsin and Cincinnati in September and should be able to compete with both of those teams. After closing out conference play they travel to Illinois in an interesting matchup. The Bulldogs are a blue collar team to keep an eye on as they will end up bowling in the post season.

Louisiana Tech and San Jose State will both be decent teams that will likely end up in December bowl games. Keep an eye on both of them during the season to help your decision making with bowl picks.

Utah State, Hawaii, Idaho and New Mexico State will all struggle in 2009. You probably won’t see or hear much out of those programs if you aren’t local.

Wrap Up- The WAC is really a two horse race between Nevada and Boise State. Fresno State and Louisiana Tech could both potentially play spoiler.