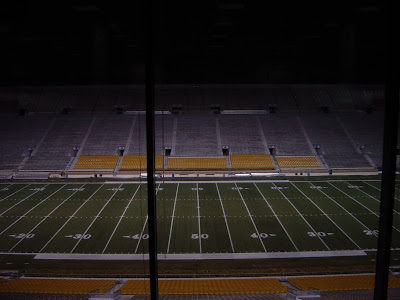 The calm before the storm appears to be coming to an end and by Friday afternoon the Notre Dame faithful should have a steady diet of Irish Football news to carry us through to September 5th. Here is the roundup heading into the start of fall camp.

Coach Weis appears to be taking a hiatus from Twitter for the season. At 4:47am Monday morning NDHFC hit the web with this Tweet.

Back to work. Thanks for following me and I'll talk to you again after the season. Go Irish!

I love that he’s at work at 4:47am that motivates me. I will miss the Tweets though. In the mean time recruits can get a steady dose of Irish information at insidenotredamefootball.com instead.

There is some speculation that the lengthy series with UCONN will not happen. Sounds like a win for both parties to me. It would give UCONN their dates at Rentschler Field and ND an opportunity to put together a more intriguing matchup. Here’s to hoping the speculation is true!

The 2010 commitment wave continued this week with the addition of OLB/DE hybrid Prince Shembo. Nice. This has the potential to be another very good class if the staff can pick up some offensive and defensive linemen!

Coach Weis has his opening presser scheduled for noon on Friday and camp starts on Saturday. The opening presser will kick off a steady stream of pressers, interviews and practice observations for the fan base to chew on. I expect und.com will have plenty of video coverage up as per usual which will strike yet another blow to my productivity! For those in the South Bend Area Saturday August 15th is "Fan Day" and practice at Notre Dame Stadium is open to the public from 9:00am to 11:30am.

The Irish will be the big finale to my 2009 Preseason Preview and I’ll update my take on all the Notre Dame position groups once camp gets rolling. If you are new to One Foot Down THIS LINK will get you caught up in about 30 seconds.