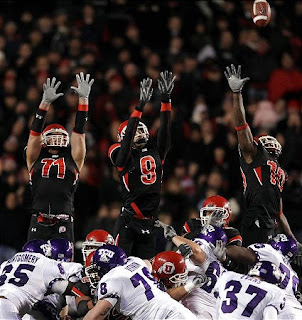 For the Non-BCS Conferences I will be focusing on potential bowl teams and BCS Busters. I know, I know but I only have so much free time to spend on this college football hobby of mine.

The Mountain West has made a lot of noise in the off season after Utah upset Alabama in the 2008 Sugar Bowl but I don’t see any legitimate BCS Busters in the Mountain West in 2009. They conference is home to three very solid football teams in TCU, BYU and Utah but all three of them head into 2009 light on experience and a little vulnerable as a result. Air Force, Colorado State and UNLV won’t be pushovers and the rest of the conference has an infusion of new coaching so one of those teams catching a spark is possible. In the end I think the top 3 teams will all get tripped up along the way, most likely by one another. But it will make for an interesting race to the conference title.

TCU- The Horned Frogs have won 11 games in 3 of the last 4 seasons but will be hard pressed to match that in 2009. TCU only has 6 returning starters on offense to include 2 offensive linemen. On defense they return 4 starters but only all world DE Jerry Hughes in the front 7. Gary Patterson always has a good defense but it won’t be quite as good as it usually is. The Frogs have two interesting non-conference games in September at Virginia and Clemson. Both the offense and the front seven will have to get it in gear early to run the table in 2009.

BYU- The Cougars are getting a lot of preseason hype with QB Max Hall and RB Harvey Unga returning but only two other starters return on offense. With a green offensive line all skill players tend to struggle and that line won't have much time to gel with Oklahoma and Florida State on the schedule in September. They do return 8 starters on a defense that allowed 22ppg in 2008 which will help tremendously. I think they’ll put up a fight but lose to both Oklahoma and FSU. In conference play they will be capable of trading blows with TCU and Utah.

Utah- The Utes are media darlings but return only 5 starters on offense. They do have 3 offensive linemen back but will be breaking in a new QB in Terrance Cain. On defense they return 7 from a unit that allowed 17ppg in 2008. The Utes have a non-conference tilt with Oregon in September that will likely leave them with a loss before they duke it out with TCU and BYU for the conference title.

Air Force- I mention Air Force because like Navy they will always compete with much more talented teams. With 6 returning starters on both sides of the ball the Falcons are likely to deal an extra loss to one of the top 3 teams and could push navy for the CIC trophy this fall.

Colorado State and UNLV should both have decent teams that won’t be pushovers for the top 3 in the conference. San Diego State, Wyoming and New Mexico all have new coaches and relatively experienced lineups.

Wrap Up- In reality the Mountain West isn’t too far behind the Big East, if at all, but doesn’t have an obviously dominant BCS Buster heading into 2009.