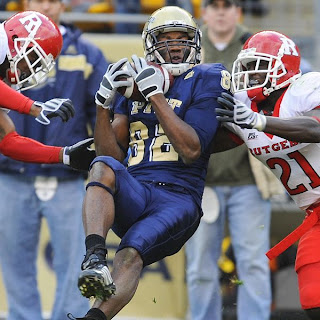 And so we have worked our way to the last of the BCS Conferences. There isn’t any way to sugarcoat it the Big East is in a tough spot. They are often cited high on the list of arguments as to why the Mountain West should be included in the BCS Conferences with good reason. Without a miraculous performance in non-conference games against other BCS conference teams in 2009 that argument will only intensify. Here is how I see it shaking out in 2009.

Pittsburgh- Dave Wannestedt has actually assembled the most talented roster in the conference. He also has 8 starters back on offense and 7 on defense. On offense the Panthers return 4 offensive linemen, QB’s Bill Stull and Pat Bostick and WR Jonathan Baldwin. They replace workhorse TB LeSean McCoy with sophomore Sariff Harris who has a huge load to pick up. Wannestedt is a big line of scrimmage guy and with 3 starting defensive linemen back the Panthers will remain relatively tough in the trenches. The only team that can keep Pitt from winning the conference is Pitt which is an absolute possibility. The Panthers don’t play a conference game until October but could get surprised by Buffalo or Navy and will have their hands full against NC State. They also host Notre Dame in November in a game the Irish should win. I see Pitt dropping the ND game plus one in September but possibly running the table in the Big East to win 10 games. I’ll be at Heinz field on 14 November when they host Notre Dame.

Rutgers- Greg Schiano has a couple of things going for him heading into 2009. One his team finished hot last season snapping off 6 straight victories and a bowl win. Two he has all 5 offensive linemen back including two sophomores that had to start as freshmen. Rutgers plays host to Pitt, USF and West Virginia which helps. The Scarlet Knights have four cake walk games plus Maryland out of conference. With that non-conference schedule and their three toughest conference games at home I see Rutgers as a 10 win team that pushes Pitt for the Big East crown.

USF- The Bulls return 6 starters on both sides of the ball. These guys are a little suspect but do have some decent talent and a couple of players that are difference makers. On offense QB Matt Grothe returns and he has the ability to be a fireplug for this team that can make plays with his feet if things break down. He will be breaking in a green offensive line that returns only one starter which will be problematic. On defense DE George Selvie is a true stud that will require double teams all season but will produce anyway. Selvie just being on the field gives the Bulls an advantage especially against inexperienced offensive lines. The Bulls have 3 patsies, Florida State and Miami non-conference so they’ll drop the latter two plus another 1-2 in conference to finish with 8-9 wins.

West Virginia- The Mountaineers are about to start struggling a bit in comparison to recent history. Bill Stewart is about to feel the Coker effect. The Mountaineers only return 5 starters on offense and only one of them is an offensive lineman. They also replace QB Pat White who was a great college football player and the motor that made this team go for the last 4 years. They do return 7 on a defense that only gave up 17ppg last year so that will help them hang in there. West Virginia has the toughest non-conference schedule in the conference with East Carolina, Auburn and Colorado on the docket and they will struggle against all of those teams. I think they’ll drop 2 of those plus another 2 in conference play to finish with 8 wins.

UCONN- The Huskies return 6 starters on both sides of the ball but replace 2000 yard rusher Donald Brown with a 1-2 punch of sophomore Jordan Todman and senior Andre Dixon. Dixon is a capable back as is Notre Dame transfer QB Zach Frazer. Randy Edsall is a pretty good coach but the Huskies have their hands full. With non-conference games against North Carolina, Baylor and Notre Dame the Huskies will be fortunate if they are bowl eligible.

Cincinnati- Brian Kelly does more with less and returns 8 starters on offense to include QB Tony Pike. The offense will be able to move the football. The defense however, is a different story. The Bearcats return only 1 starter in SS Aaron Webster and the will be highly vulnerable as a result. Like UCONN with non-conference games against Oregon State, Fresno State and Illinois the Bearcats will be lucky if they are bowl eligible.

Louisville- This honeymoon is long over. The Cardinals did not go bowling last season and they likely won’t again in 2009. They have 13 total starters back but play Kentucky, Utah and Southern Miss non-conference which almost guarantees another losing season.

Syracuse- The Orange have 14 returning starters and a new Head Coach in Doug Marrone. They do have some tradition to work with and will improve on the 3 wins they picked up last season but going bowling will take a miraculous turnaround.

Big East Wrap Up- Pitt, Rutgers and USF will duke it out for the conference title but I see Pitt winning it. West Virginia, UCONN and Cincinnati will all be decent at best. West Virginia has been the premier program in the Big East the last few years winning four straight bowl games and carrying the load for national respect. With the Mountaineers beginning a down trend the Big East is in a touch spot. Some of the other teams need to pick up the slack quickly before the conference really comes under fire for retaining their automatic BCS tie in.