The week in news- Roses, Media Days and Cash Money

Share All sharing options for: The week in news- Roses, Media Days and Cash Money 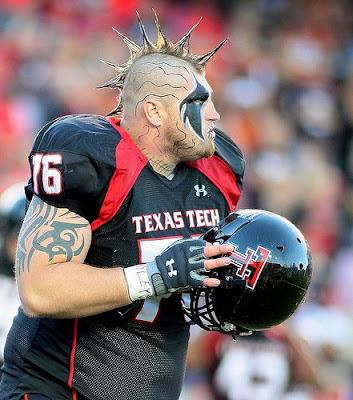 The special treatment for the Rose Bowl to preserve a Pac-10 vs Big Ten matchup even when a Big Ten or Pac-10 team plays in the BCS Championship Game ends in 2010. This has the potential to be interesting. The two best Rose Bowls of the decade were the two that Texas played in following the 2004 and 2005 seasons. This might actually do the Rose Bowl some good. I’m tired of watching USC smoke check a Big Ten team.

Have you checked out the new and improved Phil Steele experience chart? It will make your head explode.

USC freshman Frankie Telfort will not be medically cleared to play due to a congential heart defect. That's brutal. Best wishes to Telfort whose scholarship will still be honored by USC.

Steve Kragthorpe "reassigned" Greg Brohm within the Louisville athletic department. With this move the Louisville first family has almost been completely removed from the program.

Speaking of oddball reassignments, San Diego State coach Chuck Long is still hanging around writing book reports and such for 750k a year after being fired as the Aztecs coach. How do I get that job?

From Big Ten Media Days...
Minnesota Head Coach Tim Brewster wants to add a 12th team and play a championship game in December like the SEC, Big XII and ACC. Dr. Saturday has the details.

Hail to the Orange has a great post about Joe Paterno drawing plays up on a table cloth for some reporters. Classic.

Hot on the trail of the announcement that Yankee Stadium will host some college football games the Zooker says he wants to throw down with Northwestern at Wrigley.

Texas and Oklahoma still hate each other.

Iowa State players had some choice comments about departed Head Coach Gene Chzik. If I'm Auburn this might make me a little nervous. Then again the guy doesn't get paid to be their buddy.

The Dread Pirate Mike Leach re-surfaced this week. For some reason I find just about everything Leach says fascinating. The guy is out there. Leach brought offensive lineman Brandon Carter along sporting a sweet new tat across his dome. Carter seems to think his professional wrestler mohawk, tattoos and face paint are intimidating. Didn't seem to scare Oklahoma! I hope professional wrestling works out for Carter if the NFL doesn't. Dude might have a hard time landing a job otherwise.

The list of transgressions at USC just got a little longer. Pete Carroll apparently had an NFL tactician advising him on the Trojan special teams in 2008. Nice. Carroll of course is of the opinion that this is not a violation. Her Loyal Sons have a post that sums up the whole affair quite nicely.

The EA Sports NCAA Football video game debate rages on. The way this thing is heading I won't be surprised if EA Sports is ultimately forced to go to completely generic rosters that don't at all resemble the real teams. Sweet, let's ruin the coolest video game ever.

This new SEC Digital network is a great idea. The rest of the country needs to take notice and follow suit. I'll never get anything accomplished again but oh well.

After making a pitch to move the College Football Hall of Fame to Dallas Jerry Jones is now trying to get the Big XII title game permanently moved to his new stadium as well. Rich guys.

The Orlando Sentinel put together a couple of interesting lists this week. The first ranks all the FBS schools by revenue production. Texas is king of the cash. The second ranks all the head coaches by salary. It is pretty wild what these guys get paid these days.