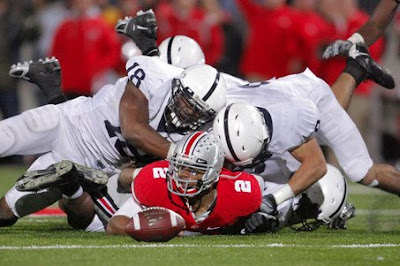 The Big Ten is in an interesting crossroads. The conference has a rich history and boasts a ton of tradition but has picked up a reputation in the last few years for struggling in bowl games and other "big" non-conference games during the regular season. In the last three years the Big Ten is 6-16 in bowl games and 0-6 in BCS bowl games. So heading into 2009 there is not a true senior in the Big 10 that has a BCS win under their belt. Despite these struggles they obviously haven’t affected the pollsters too much as the conference still picked up 2 BCS berths each season. A great ongoing debate amongst college football fans is just what is the problem with the Big Ten in bowl games? The two most common schools of thought is the fact that most teams in the conference play their last game prior to Thanksgiving and that the conference as a whole is short on speed. Of note Illinois and Wisconsin are the only two Big Ten teams heading into 2009 with a bye week and any games scheduled after Thanksgiving. The other 9 teams play 12 straight games starting Sept 5th and ending Nov 21st. I don’t think that schedule model helps especially for the BCS games in early January but the speed is a bigger issue and I think they struggle with it more in the interior than at the skill positions.

So what does 2009 look like? In many ways it looks pretty similar to the Pac-10. Ohio State has been a less formidable version of USC but has been at the top of the conference for several years running. Penn State is also getting a lot of hype after a Rose Bowl in 2008 but Illinois, Iowa, and Michigan State also have some potential and have the added benefit of being off the radar. Michigan will also be better than most expect them to be and Minnesota has a ton of experience. I think Northwestern takes a dip and Purdue will have a rough season. Indiana is a foregone conclusion. Ohio State and Penn State are both replacing a lot of players which makes them very vulnerable to the middle of the pack and those teams in the middle can all compete with one another. It all sets up for another relatively wide open conference race in 2009.

Ohio State- I think the Buckeyes will still retain their position at the top of the conference. Jim Tressel has really done a great job with the Buckeyes but does have some challenges heading into this season. The Bucks only have 5 starters back on offense but 3 are offensive linemen and one is QB Terrelle Pryor. Pryor will only be a sophomore but is a great athlete that creates multiple problems for opposing defenses. RBs Brandon Saine and Dan Herron provide a good 1-2 punch and will fill in well for departed Chris Wells nicely. On defense the Bucks return 7 starters from a unit that only gave up 14ppg a year ago and back fill with some highly touted recruits. Ohio State hosts USC week 2 in a huge game for themselves and the Big 10 as a whole. Another pounding will fan the national grumble about the state of the Big 10. The Buckeyes will be vulnerable to any team with a solid defensive front 7 that forces Pryor into throwing the ball up field which is the area of his game that needs the most improvement. I think Ohio State will lose to USC at home then stumble once more before heading to Pasadena as the Rose Bowl representative.

Penn State- The Nittany Lions have several holes to fill as they only return 9 starters total. Despite this they appear to be quite the preseason media darling mostly due to a horrendously weak non-conference schedule and Ohio State visiting Beaver Stadium. They have QB Daryll Clark and RB Evan Royster back but lost three top tier receivers and returners in Deon Butler, Jordan Norwood and Derrick Williams. Shiny skill players with a sketchy supporting cast on the OL tend to run into issues and I think Clark and company will have some issues especially early. Fortunately that schedule buys them a few weeks to gel. On defense it looks even worse as the Lions only return two DTs, MLB Sean Lee (post injury) and SLB Navorro Bowman if he’s not in hack. There are pundits out there predicting Penn State to go undefeated but I don’t see it happening. Due to their schedule they might pull off winning 10 games but I highly doubt I’ll be picking them in a bowl game where they get a first look at a quality opponent from another conference.

Michigan State- Mark Dantonio does a great job coaching this team up. The Spartans won 9 games last season and return 7 starters on offense and 8 on defense. They have no QB to speak of but Brian Hoyer wasn’t exactly setting the world on fire. They just need someone to step up that can take care of the football and manage the game. Replacing RB Javon Ringer is the biggest obstacle for the Spartans as he really carried this team in 2008. Dantonio doesn’t do anything fancy and I see Sparty winning another 8-9 games in very blue collar fashion.

Iowa- On paper the Hawkeyes look like a pretty good football team and very similar to Michigan State. They return 6 starters on an offense that averaged 30ppg last year and 8 on a defense that only gave up 13ppg in 9 win season. Kirk Ferentz and his staff do a pretty good job of taking average talent and coaching these kids up. I think the Hawkeyes will quietly float around the top of the Big Ten this season and win another 8-9 games.

Illinois- The Illini went from 9 wins and a Rose Bowl appearance in 2007 to not going bowling at all in 2008. I think the wild ride they call the Zooker bounces back up in 2009 kind of like the killer at the end of a horror movie after you thought he was already dead. The Illini have 8 starters back on offense to include 3 on the offensive line, QB Juice Williams and WR Arrelious Benn. Zook replaced offensive coordinator Mike Locksley with Mike Schultz from TCU who ran a very balanced attack in Forth Worth. Despite the system change they will likely average around 30ppg as they have the last two years. The defense returns only 5 starters but does have good talent to work with. We’ll find out a lot about the Illini in week 1 when they play Missouri. They have a bye in week 3 before a run at Ohio State, Penn State and Michigan State in succession that will make or break their season. From that point forward they should be able to win out. The Illini smartly extend their season through December 5th finishing up with non-conference games against Cincinnati and Fresno State. This is yet another team with 8-9 win potential.

Michigan- I think Michigan might be the most dangerous team in the Big Ten. Not dangerous as in they might win the conference, but dangerous as in they might be the ultimate spoiler for a few conference foes. Regardless of what you might think of Rich Rodriguez his offensive system is proven and he’s working hard on that Big Ten speed issue in Ann Arbor especially at the line of scrimmage. The Wolverines have 10 returning starters on offense but will break in a new QB. It looks like it will be freshman Tate Forcier but fellow freshman Denard Robinson could also get into the mix. The offense will have September to gel as they open with Western Michigan, Notre Dame, Eastern Michigan and Indiana. ND should handle up on the Wolverines in week two but they should bounce back and head into October 3-1 and starting to believe in themselves a little bit. On defense they return 5 starters but the front 7 is tough especially at LB. This defense will be vulnerable to a good passing game, especially early, but that isn’t exactly the strength of the conference. As a result I think the Wolverines will improve significantly on the 3 wins they picked up in 2008 and I think they will be bowl eligible.

Northwestern- The Wildcats put together 9 wins last season but I don’t see a repeat in 2009. They have 5 returning starters on offense to include 4 offensive linemen but replace all of their skill players to include RB Tyrell Sutton. QB Mike Kafka did get quite a few minutes last year and does a good job managing the offense and even runs the football decent which will help. The defense returns 8 starters from a unit that held opponents to 20ppg last year so they should be serviceable. Most importantly the Wildcats don’t play any decent non-conference opponents and don’t have Ohio State or Michigan on the schedule which will help get them back to bowl eligibility.

Wisconsin- The Badgers have steadily declined for the last three years under Bret Beliema and I don’t see any significant turnaround happening in 2009. They have 11 returning starters total and a pretty green offensive line. QB Dusting Sherer is back but will get pressed by redshirt frosh Curt Phillips. I think the fans in Camp Randall can expect another very unspectacular 7 win season.

Minnesota- The Gophers have significantly improved their recruiting the last two years from really bad to decent but still have a long way to go. They do have a very experienced team with 9 returning starters on offense and 8 on defense from a team that won 7 games in 2008. Despite this I don’t see them winning more than 7 games again this season. A week 3 game against Cal will be a good measuring stick. They did curiously build a new outdoor stadium that they will be breaking in. I’m thinking that is going to be a brutal venue to visit in November.

Purdue- The arrow is pointing straight down for the Boilers in 2009. Danny Hope takes over with only 5 returning starters on offense and hired Gary Nord from Florida Atlantic to be the offensive coordinator. The Owls ran a pretty wide open pass first spread so the offensive philosophy shouldn’t change much. They picked up a lot of recruits from the state of Florida this year and have Miami transfer QB Robert Marve waiting in the wings for 2010. The defense returns 7 starters but lost DC Brock Spack to a HC job and replace him with journeyman assistant Don Landholm. There is hope for the future but 09 will be a difficult "rebuilding" year.

Indiana- The Hoosiers have 15 total returning starters but by far the least talented roster in the conference. This team will continue to struggle in 2009.

Big Ten Wrap Up- As a whole I really think the Big Ten has the potential to play out in very similar fashion to the Pac-10. Ohio State has the overall edge, but not to the same degree that USC does in the Pac-10. Those next 7 teams really all have the potential to beat each other up to varying degrees. The end result will likely be very similar but with slightly more bloodletting. I expect to see Ohio State will be back in the BCS with 1-2 losses and Penn State is on the fringe. They will be followed by several 3-4 loss conference counterparts.