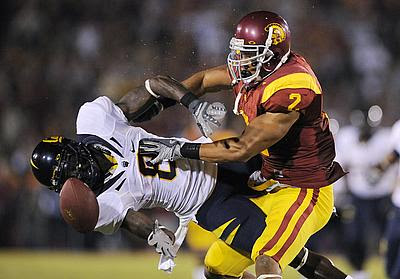 Heading into 2009 the only thing that is reasonably certain in the Pac-10 is that USC will win the conference and the Washington schools will bring up the rear. In the middle exists a potential free for all that appears to be lacking any significant advantages that put anyone in the driver seat for the #2 slot. Cal has a good squad and the arrow is pointing up for UCLA, and to a lesser extent Arizona. Oregon is in flux, but still dangerous, and Oregon State always does more with less. Stanford is just good enough to cause problems and Arizona State is a wild card. All of those teams should be able to play with one another. Sound crazy enough? It should all make for some entertaining late night games on Saturdays this fall. So let’s take a look at who exactly has what heading into the season.

USC- Pete Carroll continues to have the most talented roster in the country and the Trojans will need to lean on that talent this fall. After losing both his offensive and defensive coordinators to Washington Carroll promoted from within so the system should remain the same. Rocky Seto takes over as the DC and it is really Carroll’s defense anyway. The defense returns just three starters but back fills with 5 star talent that has seen plenty of mop up time. Last season the Trojans only allowed 9ppg, which was sick, so a bit of a back slide is to be expected. That said it won’t be a big one and despite their lack of starting experience the USC defense will still be among the best in the country. The offense returns 9 starters but has to replace QB Mark Sanchez. New OC John Morton has only been in the program for two years so if there are any new wrinkles they will likely come from him but I don’t expect any real noticeable changes. The Trojans should pick up right where they left off on offense. Replacing one very talented QB with another behind a veteran OL and a plethora of top flight backs and receivers won’t be a problem so long as Corp/Barkley/Mustain can manage the game and get the ball to his play makers. Think John David Booty. The only potential issue for USC heading into the fall is the NCAA investigation that continues to hang over the program like a dark cloud. Thus far nothing has materialized and it is anyone’s guess as to whether or not it ever will. If it does that might be the only unusual variable that could throw the Trojans slightly out of whack. They do have two non-conference road games that could be difficult at Ohio State and Notre Dame. That said the Trojans dispatched both teams with ease in 2008. I expect both those teams to put up a fight on their home fields this season and USC does have a track record of losing focus and dropping one game they shouldn’t in conference play. I see the Trojans losing one somewhere along the way and ending up back in the Rose Bowl.

Cal- The Bears have every reason to win 9-10 games this fall except for one. They tend to be their own worst enemy. Jeff Tedford has good overall talent on the roster but the Bears have steadily trended down in recruiting the last five seasons. As a result they will most likely have some significant challenges in the next couple of years and Tedford needs to make the most of the talent and depth he has now in 2009. The Bears return 7 starters on offense to include QB Kevin Riley and all world RB Jahvid Best. That offense will continue to put up points and the defense returns 8 starters from a unit that held opponents to 19ppg in 2008. Cal will be a good football team and on paper should finish #2 in the Pac-10.

UCLA- I expect the Bruins to develop into a legitimate factor under Rick Neuheisel. They have recruited very well the last two seasons and have good overall talent on the roster and great talent in the Freshman and Sophomore classes. The Bruins return 9 starters on an offense that is under the direction of Norm Chow and will only get better. I think this unit will take a big step forward this fall after struggling with 2 returning starters in 2008. Two redshirt freshmen will compete with Kevin Craft for the QB slot and the Bruins need QB play to be more consistent. On defense the Bruins return 7 starters but lost DC DeWayne Walker to the HC job at New Mexico State. Neuheisel promoted Chuck Bullough from within and they should still improve on the 29ppg they allowed in 2008. Their road trip to Tennessee in week two will be interesting for both teams. Neuheisel has a proven track record of getting his teams to a high level and I think he will ultimately do the same at UCLA. I expect the Bruins will take a solid step forward this fall and set themselves up to potentially pose a legitimate threat to USC in 2010.

Arizona- The wildcats finally turned the corner a bit in 2008 in the 5th year under Mike Stoops. They return only 2 offensive linemen and 6 total starters on an offense that will have to break in new QB in Matt Scott. Sonny Dikes is the offensive coordinator and was the co-offensive coordinator at Texas Tech prior to joining the Wildcats in 2007. They had a huge jump in offensive production last year and I expect they will be able to maintain that with Dykes directing a Texas Tech style spread system. Mark Stoops is the DC and combined with Mike provides a solid defensive foundation. They return 7 starters from a defense that allowed 21ppg in 2008. If they can maintain that defense in 2009 the offense could put up enough points to keep the Wildcats in the mix for the #2 slot in the conference.

Oregon- The Quack Attack is getting a fair amount of love in the preseason mostly due to the fact that their offense has averaged around 40ppg the last two years under the direction of Chip Kelly. Kelly takes over in 2009 as the HC and brought in Mark Helfrich from Colorado post spring practice to run his offense. The coaching transition combined with 4 returning starters on offense will likely result in a drop off in production in 2009. It is still Kelly’s offense but with only one returning starter on the OL the Ducks could struggle a bit by their standards. QB Jeremiah Masoli is a legitimate threat to run and will help keep opposing defenses honest while the offense tries to gel early. The defense was fairly porous in 2008 allowing 28ppg but the Ducks simply outscored opponents. That shootout style of play most likely won’t pick up another 9 regular season wins in 2009 but might be enough to keep them afloat in the free for all below USC. The Ducks start out with non-conference games against Boise State, Purdue and Utah before hosting Cal in week 4. They could conceivably lose 3 games before the end of September if they don’t get it together quickly. The week 1 contest at Boise State will be a great indicator.

Oregon State- Mike Riley consistently does more with less at Oregon State. Based on raw talent the Beavers shouldn’t be in the Pac-10 mix at all but due to good coaching they will continue to hang around in the middle of the conference. The offense returns 7 starters to include QB Lyle Moevao and RB Jacquizz Rodgers so I expect they will continue to score points. The defense returns only 3 starters and will need to get it together quickly to maintain the solid performances they put up the last few years. In short the Beavers should be a little better on offense and a little worse on defense which will average itself out. The Beavers are yet another one of these floater teams that can trade blows with the rest of the conference.

Stanford- Stanford is an interesting team and I think what Jim Harbaugh has brewing might actually get the Cardinal to the point that they are consistently competitive. The Cardinal have 9 returning starters on offense and 8 on defense from a tea
m that went 5-7 in 2008. Redshirt Freshman QB Andrew Luck is supposed to be the real deal and could make a big difference in 2009. The Cardinal put up 26ppg on offense but allowed 27ppg on defense. If the defense can improve just a little bit in 2009 the Cardinal could be significantly better. An early non-conference game at Wake Forest will be a good barometer for both teams. Their schedule really sets up in three distinct tiers of 4 winnable games, followed by 4 evenly matched games and finishes with 4 tough ones against Oregon, USC, Cal and Notre Dame. If they aren’t bowl eligible before Halloween they may not make the cut. This is a scrappy team that plays hungry and doesn’t back down from anyone which makes them a little dangerous. I think they will get bowl eligible in 2009 and put up a decent fight against the big boys along the way.

Arizona State- Dennis Erickson started hot in 2007 then struggled to 5-7 in 2008. The defense was decent at times in 2008 but will need to get a little better to help the win column. The offense struggled in 2008 but returns 4 starters on the offensive line, 2 receivers and RB Shaun DeWitty. If QB Samson Szakacsy can just manage the game they should be serviceable. The Devils schedule sets up with two automatic W’s, a trip to Georgia then Oregon State and the Washington schools. That should put the Devils at 4-2 or possibly 5-1 before they enter the home stretch where I expect them to struggle to pick up another 1-2 wins for bowl eligibility.

Washington- Steve Sarkisian takes over a program that has nowhere to go but up. Sarkisian inherits decent overall talent and a top line QB in Jake Locker. With 18 returning starters, better coaching and a new attitude the Huskies will definitely improve on their 0-12 mark from a year ago. OC Doug Nussmeier came from Fresno State and he and Sarkisian will shore up the offense and let Locker do his thing. I expect a significantly better performance than the 13ppg they put up last year. Former USC DC Nick Holt takes over a defense with 10 returning starters that was horrendous last year giving up 38ppg. I expect this defense will be significantly better. Overall this team will be much improved but not to the extent that they become bowl eligible as they have LSU and Notre Dame out of conference. I expect they will win a few games and get a good start towards climbing back to respectability.

Washington State- The Cougars return 15 starters in Paul Wulff’s second season but there won’t be any big improvements in 2009. The overall talent level at Wazzu is by far the lowest in the Pac-10 and I don’t see any indications that bowl eligibility is a possibility any time in the near future.

Pac-10 Wrap Up- USC should maintain their stranglehold on the rest of the conference but Cal, UCLA, Arizona, Oregon, and Oregon State should all be able to compete with one another. I expect that those teams in the middle will most likely beat each other up during the season resulting in all of them finishing with 2-3 conference losses in the end. Stanford and to a lesser extent Arizona State are just good enough to play spoiler and cause problems. But some of those late night Pac-10 games should be fun to watch.