The week in news- Montana, Japanese Football and Tebowgate

Share All sharing options for: The week in news- Montana, Japanese Football and Tebowgate 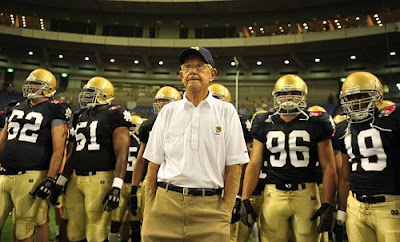 I took a long and early weekend to spend some time with the team in D.C. catching up on all things patriotic. I highly recommend attending an evening parade at Marine Barracks Washington should you ever find yourself in D.C. during the summer. If you aren't fired up about being an American when that's over there is something seriously wrong with you. In typical fashion a few things college football popped up while I was otherwise occupied that I want to mention before the end of the coming week. So consider this a supplement to last week's TWIN.

Notre Dame "preferred walk on" quarterback Nate Montana is transferring to Pasadena City College with the intent of getting some game reps. Nate says he plans to return to South Bend in the fall to compete for the job. I've seen some speculation as to what all this means but at the end of the day I think the whole thing is a non-issue. With Clausen and Crist a solid 1-2 and Evan Sharpley now returning for a 5th year the chances of Montana getting any action with the Irish in 2009 would have been slim at best. For a kid that started playing football very late in high school I think the decision actually makes sense. We'll see how it plays out but I expect he'll be back in South Bend this spring.
Dallas Cowboys owner Jerry Jones is working with the city of Dallas to try and persuade the College Football Hall of Fame to relocate to the Big D. Seriously?
The Notre Dame Football Legends rolled to a 19-3 victory in the 2009 Notre Dame Japan Bowl. Notch one more victory for Lou Holtz. Having spent some time living in Japan and watching some of their football on TV I would have been seriously horrified had the "Legends" not pulled it off. I don't care how old some of them are.
SEC Media Week closed out with some entertainment. After creating Tebowgate out of a non-story the media whipped itself into a frenzy after none other than Steve Spurrier admitted that it was he who had voted Jevan Snead as 1st team preseason All SEC vice the chosen one. This would have been really cool if Spurrier had just stuck to his guns but instead he ended up blaming his director of football operations who filled out his ballot for him. Nice work by the way. I'm amused this is actually a story. What does preseason all anything get you? It's nothing but a platform to prognosticate on expectations. The only votes that matter get submitted after they play 12 games. Not to mention Snead is a damn good QB. Is it that outside the box that someone might have actually thought he was better than Tebow? Apparently.
After an off season full of Tennessee entertainment Lane Kiffin closed out the SEC Media Days by saying he essentially orchestrated all that insanity to draw attention to the program and help recruiting. Kiffin might turn out to be a crazy genius after all.