The week in news- NCAA Football 10, The Hall of Fame and ND Schedule Stuff

Share All sharing options for: The week in news- NCAA Football 10, The Hall of Fame and ND Schedule Stuff 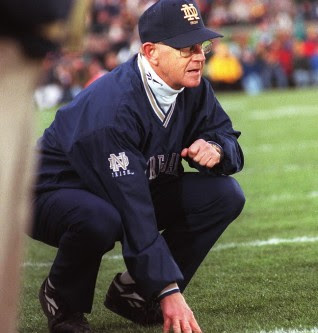 TWIN is brought to you early this week as I’m taking a long weekend with the team. I'll be up mobile so if anything else major pops up I'll let you know. Here’s the short and sweet version.

For those of you with a copy of EA Sports NCAA Football 10 at home version 1.0 of the named rosters are now available. So stop playing with those jacked up default rosters that Sam Keller is suing over! The rosters are still pretty rough but it sounds like they will be fixed when version 2.0 comes out some time next week. You can even send these guys corrections if you are that moto.

Baylor jumped on the Nike uniform makeover train this week and I have to say these actually look pretty good with the exception of the all gold disco getup. I’m kind of digging the white helmets.

Graham Harrell holds the FBS record for touchdown passes but he will be taking his services up to Canada since the NFL doesn’t want him. Smart Football has an interesting take on Harrell and the NFL. I’ve already thrown my two cents in on this one.

USF kicker Maikon Bonani fell 35 feet from a gondola ride at Busch Gardens in Tampa. Bonani was working as the attendant on the ride at the time. Bizarre to say the least.

Michigan Offensive Lineman Kurt Wermers transferred to Ball State and took some shots at the Rodriguez "family values" on his way out the door. Turns out the kid was academically ineligible anyway. Nice work. Holly at Dr. Saturday has the details.

Smart Football has a great post up consolidating all of the highlights from the Q&A;'s on the spread offense that the WWL has been doing with various coaches.

Lou Holtz headlined 21 former players and coaches enshrined into the College Football Hall of Fame on Saturday. The list includes several noteworthy players and coaches and the standard head scratcher or two. HLS has a great write up on Coach Holtz that is definitely worth a read if you have yet to make your way over there.

Blue and Gold says recruiting is the key to a successful college football team. True.

Notre Dame vs. Army at Yankee Stadium appears close to being "official" for 2010. I still think this is pretty cool as a one time engagement but I’m a lot less jazzed about the prospect of a long series with the Black Knights. Somewhere in there Tony Barnhart also reported that Georgia Tech is pitching the Georgia Dome to ND as a possible off site game. Further rumors indicate that the final two opponents on the 2010 schedule will be TCU and Tulsa. The 7-4-1 is obviously a hotly contested topic amongst ND fans and most tend to vehemently oppose it while a few others think it could work if it gets set up right. We Is ND has a good write up in the spirit of the former, and Domer Law has a post this week detailing a well thought out argument for the latter. I’ll wait to weigh in when it all becomes official.