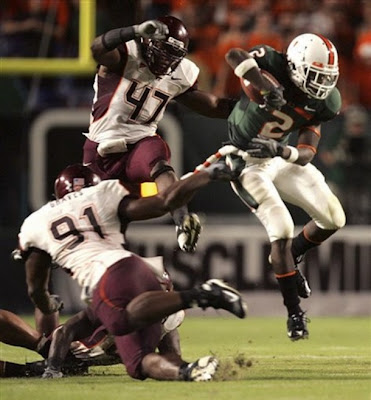 Heading into 2009 the ACC Coastal Division looks to be much more formidable than the Atlantic. I still don’t see any rhyme or reason to the Coastal/ Atlantic split outside of the dream money matchup between Florida State and Miami in the title game. I’ve been to Blacksburg and it isn’t anywhere near the coast! Regardless there are three teams with a legitimate shot at winning this division in Virginia Tech, Miami and Georgia Tech. I also consider North Carolina a dark horse.

Virginia Tech- The Hokies have the inside track on both the division and the conference. They have dominated the ACC since joining in 2004 primarily due to good coaching. Frank Beamer and his staff have good talent and make the most of it. Some say the Hokies are boring but they play great defense, great special teams and sound fundamental football especially at the line of scrimmage. The Hokies return 9 starters from an offense that only averaged 22 ppg in 2008 and should take a big step forward in 2009. Offensive Coordinator Brian Stinespring needs a dynamic QB to make this offense go. Tyrod Taylor takes the reigns full time at QB and if he can make plays with his feet and present problems to opposing defenses in a fashion similar to Michael Vick and Brian Randall the Hokies will be in business. The defense returns 7 starters and as long as Bud Foster is at the helm they will be one of the best in the country. Special Teams, which Beamer coaches himself, will remain a strength as well. The Hokies start out with a brutal September slate of Alabama, Marshall, Nebraska and Miami but only travel for the Bama game in Atlanta. Those games and the Oct 17th meeting with Georgia Tech will determine their fate. They don’t play Florida State or Clemson from the Atlantic during the regular season. If the Hokies can survive September they will have a legitimate place in the National Title discussion. Regardless if they can at least beat either Miami or Georgia Tech they should be in the drivers seat for the Coastal as both of those teams draw Florida State and Clemson from the Atlantic.

Miami- Interestingly Miami has been on a track that is very similar to that of Notre Dame the last two years but with much less attention from the media. Like the Irish Miami also appears ready to turn the corner in 2009. Randy Shannon has a roster full of great talent and started several freshmen from a class ranked #5 by Rivals in 2008. Heading into 2009 those sophomores will be complemented by a good mix of juniors and seniors to include a veteran offensive line. The Canes have 8 returning starters on offense and 7 on defense. As a result I expect to see a significant step forward from a team that had 9 total returning starters in 2008. Miami starts the season with arguably the toughest four game slate in the country with Florida State, Georgia Tech, Virginia Tech and Oklahoma. Opening up with their three best conference opponents and washing it down with Oklahoma is brutal. Miami is capable of playing with all four of those teams and the overall outcome of their season will depend on it. The three conference opponents are obviously the most important in terms of the ACC race and the Oklahoma game gives both Miami and the ACC a shot at a marquee program from another conference. I think all four of those games will be close and Miami could be in great shape in the ACC if they can win 2 of the 3 conference games. If they pull that off from that point forward they will be tough to stop if Shannon can keep them focused. This is a very dangerous football team that has the ability to be right in the mix for the Coastal crown.

Georgia Tech- I give Paul Johnson and his offense the benefit of the doubt. He always seems to fare better than anyone thinks he will year in and year out. The Jackets have 10 returning starters back on an offense that ran for 273 yards per game in 2008. That offense dominates time of possession and wears out opposing defenses. It also limits opportunities for opposing offenses increasing pressure which results in mistakes. The defense returns 8 starters from a unit that allowed only 20ppg in 2008. Despite winning 9 games last year the Jackets still aren’t getting a lot of respect in the polls which plays right into Johnson’s hand. This is another dangerous football team with a very real chance of winning this division and the conference. The Jackets biggest obstacle is a schedule that includes Mississippi State and Georgia in non-conference play and both Florida State and Clemson from the Atlantic division. That schedule is tough but they have the ability to play with every team on it. Georgia Tech has the ability to hit 10 wins and they will have earned their stripes if they do. As a side note the Georgia Tech fan base has quietly doubled since Johnson arrived as every Navy fan in the country is also now a Georgia Tech fan. Every time I talk to one of them they bring up Georgia Tech. Keep an eye out for the Sailors at all Tech games this fall!

North Carolina- Butch Davis has significantly upgraded the talent level in Chapel Hill and the arrow is pointing up. The Heels return only 6 starters on offense with 3 on the offensive line and 3 capable skill players in QB T.J. Yates, RB Shaun Draughn and WR Greg Little. They also return 9 starters from a defense that only gave up 21ppg in 2008. This team will be very competitive and plays a favorable schedule. UCONN and East Carolina are the two toughest non-conference games and they draw FSU, BC and NC State from the Atlantic. This team should be favored in 8 games and has the ability to put together a solid season.

Virginia- UVA has been a train wreck of late and with 11 total returning starters they most likely won’t turn the corner in 2009. Head Coach Al Groh shook up his staff after 2008 and added Gregg Brandon as his Offensive Coordinator. Brandon worked with Urban Meyer and was Bowling Green’s head coach the last six years. I expect the Cavs will go to more of a Meyer type spread in 2009 looking to find a spark. Unfortunately I don’t expect it will make much of a difference and the struggles will continue.

Duke- David Cutcliffe is a great coach but it will take nothing short of a miracle to make the Blue Devils competitive. They too return only 11 starters and have a serious uphill battle ahead in 2009.