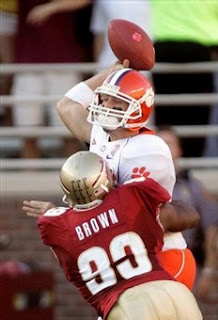 The ACC is a curious case. Despite having an overall talent level similar to the Big XII and Pac 10 the ACC has struggled on the national stage in recent years. After Florida State dominated the conference throughout the 90’s Virginia Tech and Miami joined in 2004 and Boston College followed suit in 2005 giving the ACC 12 teams and that coveted conference championship game. The conference was curiously divided into the Atlantic and Coastal Divisions with the assumption that Florida State and Miami would most likely end up in the marquee title game. That match up has yet to materialize. Instead Virginia Tech has quietly dominated the conference winning 3 conference titles since joining the league to include the last two. A four loss Florida State did upset the Hokies in the 2005 title game and Wake Forest also picked up a conference championship in 2006. Of those 5 conference champions only the 2008 Hokies were able to win their subsequent BCS Bowl match up.

Those BCS struggles and a couple of notably bad non-conference performances during the regular season give the perception of the conference struggling thus far in its 12 team format. That perception may not necessarily be fair but as the saying goes perception is reality. But that perception can also quickly be turned around and as a conference the ACC is could do just that in 2009. Several ACC teams play intriguing non-conference games that could provide considerable help with the perception issue early in the season. Most of the experts are picking Virginia Tech to continue their reign in 2009, and with good reason, but I also think Miami, Georgia Tech, Florida State and Clemson will also be in the mix. The arrow is also pointing up for North Carolina, NC State and Wake Forest who are all well coached and have the potential to make some noise. BC and Maryland will likely have down years and Virginia and Duke will continue to bring up the rear. In the end I think this will produce an exciting race to the conference title that will likely produce a 1-2 loss champion. With that here is a closer look at the teams.

Florida State- Florida State has a roster that is still chock full of elite talent. The Seminoles have under achieved the last four seasons posting a 31-21 record amidst several off field issues but they are truly a sleeping giant. The Noles have 8 returning starters on offense to include their entire offensive line and QB Christian Ponder. Head Coach in waiting Jimbo Fisher will try to continue to improve an offense that jumped from 23 ppg in 2007 to 33 in 2008. On the other side of the ball DC Mickey Andrews and Executive HC/ Linebackers coach Chuck Amato only return 5 starters but have elite talent to work with. The Noles have BYU, South Florida and Florida in non-conference play so they will likely take at least one loss out of conference. They also have 3 of the 4 best teams from the Coastal Division in Miami, Georgia Tech and North Carolina which makes their conference schedule even tougher. The Noles have all the tools to win the Atlantic but have a very difficult schedule to contend with.

Clemson- Clemson went into 2008 with high expectations and instantly flamed out. Dabo Swinney took over after Tommy Bowden "resigned" after week 6 and in my opinion wasn’t much better. Regardless he is now in charge and picked up a solid DC in Kevin Steele. Clemson returns 7 starters on offense to include their entire offensive line. Highly touted Sophomore QB Willy Korn will take over and C.J. Spiller will carry the load at RB. I expect that offense to be better than most people think. On Defense the Tigers return 8 starters replacing only one DT, one OLB and one FS from a unit that only allowed 17ppg in 2008. The Tigers have TCU and South Carolina in non-conference play which should be winnable games for them. They do draw Georgia Tech, Miami and Virginia from the Coastal and those first two will be formidable tests. On paper the Tigers should be right in the mix for the Atlantic crown and potentially the conference. The only lingering question is whether or not they will play up to their capability level in 2009.

NC State- The Wolfpack had a strange season in 2008. After starting 2-6 they won their last four to include upsets of North Carolina and Miami to get bowl eligible. That was a big turnaround in what I call program health for the Wolfpack and provides some positive momentum heading into 2009. Tom O’Brien enters his 3rd season after coming over from BC with 7 returning starters on both sides of the ball. NC State has South Carolina and Pittsburgh out of conference and they should be able to hang with both of those teams. The Wolfpack schedule sets up with 7 winnable games then closes out with Florida State, Maryland, Clemson, Virginia Tech and North Carolina. The Wolfpack will likely have at least 5 wins heading into that final stretch where they will have the chance to take a big step forward as a program.

Boston College- The Eagles have truly over-achieved under the last two coaching regimes and Frank Spaziani takes over this year after Jeff Jagodzinski was fired for interviewing for an NFL Head Coaching job. The Eagles have middle of the road talent and have thrived for years by developing kids within their system. Now that their world has been thrown into upheaval there’s no telling where
this thing is headed. The Eagles return 6 starters on defense but replace both disruptive DT’s and All American linebacker Mark Herzlich is battling cancer. The offense is a question mark with no quarterback to speak of but does return 7 total starters to include 4 on the offensive line. Gary Tranquill takes over as OC after several stops and has his work cut out for him. The Eagles start out with Northeastern and Kent State which should be automatic W’s. After that every game for them will be a toss up at best. If everything falls into place they could be bowl eligible but I’ll be very surprised if they can do it. That said BC is my personal jinx and I hate to ever pick against them for that reason alone. If they win 9 feel free to consider it my fault for predicting they won’t.

Wake Forest- Jim Grobe consistently does more with less and has 9 starters back on Offense to include QB Riley Skinner. The Defense will be suspect with only 4 returning starters but 3 of them are on the defensive line. The Deacons have Baylor, Stanford and Navy out of conference which will all be challenging for them. If the defense comes together they could be bowl eligible and with Grobe doing his thing it won’t surprise me if they pull it off.

Maryland- The Terps are the most inexperienced team in the ACC with only 9 total returning starters. RB Da’Rel Scott and QB Chris Turner return behind a pretty green offensive line and will likely struggle as a result. Ralph Friedgen picked up a new DC in Don Brown who has a good reputation but a very uphill battle. This will definitely be a "rebuilding year" for the Terps.