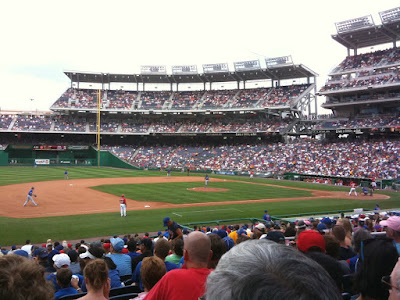 After spending several weeks prepping to move, moving then unpacking etc. I finally got caught up and took a day off. In the spirit of re-acquainting myself with the area I decided to go catch a Nationals game. The Nats didn't exist in D.C. during my last stint in the area 12 years ago so despite the fact that they are the worst team on the planet I decided to brave the park and ride/ metro adventure into the city to check them out. Live baseball with some cold beer and peanuts in the summer is generally a good thing and I'm always game for checking out a new stadium that I haven't been to before.

Nationals Park is great and it was a great day for baseball. The Cubs were in town finishing up a sweep and Cubs fans were out in force. As per usual there seemed to be more of them than there were fans of the home team. The WGN phenomenon lives. The game itself was pseudo interesting until the top of the fourth when the Cubs hung 7 runs on the hapless Nats to take an 8-2 lead. Then in the top of the 6th the game got considerably more interesting for me personally when I spotted Jeff Samardzija warming up in the bullpen. The Shark came into the game in the bottom of the 6th and retired three straight which at least temporarily got all the Cubs fans riled up again. He ended up throwing three innings and gave up two hits and one run while striking out three. He made one mistake on a fastball that he grooved to Adam Dunn who summarily pounded it into the right field bleachers. Outside of that one pitch I thought he looked pretty solid. He was consistently throwing his fastball around 95 and had good command of all his pitches. He grounded out to third in both of his at bats but looked pretty quick getting up the line to 1st. It was great to see him out there and I hope he is able to continue progressing in the organization. I took the picture from my seat. That little dot in the middle is The Shark. No zoom on the iPhone camera. Perfect. I'm sure there's an app for it but I was so annoyed I didn't bother looking for it.

I'll get back to college football tomorrow. I'll get an ACC preview up this week and there are some other things I'd like to get to as well if I can carve out the time.