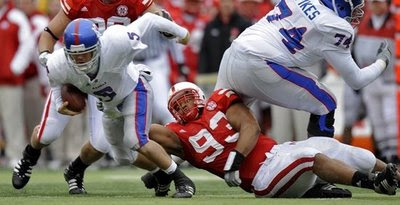 The Big XII North should be a very entertaining division to keep an eye on this year as it is one of several divisions in college football that is really up for grabs. A handful of teams have a shot at being in the mix to win the Big XII North and potentially play the spoiler role against Texas in the Big XII title game. Nebraska and Kansas appear to have the inside track on potentially winning the division but Missouri and Colorado could both be factors in the chase as well. Kansas State is a wild card and the only "sure" thing in the North is that Iowa State will finish last.

Nebraska- Nebraska is an anomaly in the North in that they have great defensive coaching and as a result a legitimate up and coming defense. As long as the Pelini Brothers are on the sidelines in Lincoln that defense will continue to improve in a league that is very short on dominant defense. The defense returns 7 total starters four of whom are in the secondary. The front 7 is young but very athletic and capable as the Huskers do have good talent on the roster overall. Ndamukong Suh is a complete beast anchoring the DL and will have Husker legacy Baker Steinkuhler next to him. I expect Steinkuhler will evolve into a monster just like his father and brother did. Coupled with that solid coaching I expect the Huskers will have one of the best defenses in the league as they continue to bring the "Blackshirts" back into prominence. That defense should give the Huskers a slight edge in the divisional race. Shawn Watson is also a good Offensive Coordinator that is very innovative and evolving now that he is no longer weighed down by the Callahan playbook and philosophy. Zac Lee plugs in at QB and I am curious to see if their offense evolves into more of a spread based read option type package with Freshman QB Kody Green waiting in the wings. I will be keeping an eye out for appearances from Green this fall. If the Huskers get that option element back into the package on a more frequent basis Green could quickly become a factor. Roy Helu and Quentin Castille provide a formidable one two punch at RB that should take some pressure off of Lee in the interim. I think the arrow is pointing up for the Huskers and I think they have a slight edge in the race for the North crown. The Huskers also appear to have a manageable schedule draw against the South as they don't face either Texas or Oklahoma State. I will be very interested to see how they fare at Virginia Tech in week 3. That should be a good early barometer of where exactly this team is.
Kansas- The fighting Manginos head into 2009 with 7 returning starters on both sides of the ball to include QB Todd Reesing and WR Dezmon Briscoe. The Jayhawks will definitely score some points. Defensively they replace a Defensive End and their entire linebacking corps from a defense that gave up 28.8 points per game which is almost twice as many as they allowed during the Orange Bowl run in 2007 when they held opponents to 16.4. That defense will need to quickly take a big step forward this fall. The biggest obstacle for the Jayhawks will be their schedule. They should start 3-0 in September then play an interesting non-conference game against Southern Miss, who I think could be a BCS buster this year. In conference they have a tough draw playing Oklahoma, Texas and Texas Tech. Of note when Rock, Chalk, Jayhawk went to the Orange Bowl two years ago they didn’t play any of those teams as they were on the opposite South Division schedule at the time. As a result of that draw I expect they’ll lose and extra 1-2 games that could bump them out of the North title.

Missouri- Gary Pinkel and the Tigers face some serious challenges heading into 2009 with only 9 total returning starters. The Tigers also replaced both departed coordinators from within. Mizzu will plug QB Blaine Gabbert in for Chase Daniel which for many pundits is the true tipping point in Mizzu predictions. If the Tigers struggle I personally don’t think that will be the reason. In my opinion Daniel benefitted greatly from running the same system in college that he had run under current North Texas Coach Todd Dodge at Southlake Carroll HS just outside of Dallas. During Daniel’s recr
uitment Pinkel asked Dodge to teach them that version of the spread and the rest is history. Daniel was highly effective in college running virtually the same offense he had been running for years. As a result he was very effective but from a talent perspective Gabbert should be even better. He is much more talented than Daniel and I think you will see him step into the QB role this year quite nicely. Similar to Texas Tech the Tigers tend to be able to replace individuals a little easier within their offensive system so I don’t expect a horrendous drop off there. Like most of their counterparts in the Big XII their defense will be a major question mark and only returns 4 starters. That Defense will likely be the thing that keeps them from winning the North especially with Texas, Oklahoma State and Baylor on the schedule from the South.

Colorado- The Buffs are an interesting case that also have an outside shot at competing for the North title if everything finally comes together for Dan Hawkins. Hawkins himself has been Johnny soundbyte this off season predicting 10 wins and spouting off about some other things not typical of a Head Coach. Regardless Hawkins enters his 4th year in Boulder probably well aware that his job is likely on the line this season. He badly wants to prove he can make the jump from Boise State to the big time as his former team hasn’t missed a beat in his absence. Colorado has 9 returning starters on offense including Hawkins' son Cody at QB. The Buffs also have Darrell Scott and Rodney Stewart as a very effective 1-2 punch at RB. Hawkins switched to a pro style scheme post spring which is an unusual move to say the least. Perhaps he’s planning on running those two kids 50 times a game. The defense is a major question mark with 4 returning starters that allowed 29.3 points per game. The Buffs have one interesting non-conference matchup with West Virginia and draw Texas, TAMU and Oklahoma State from the South. If the Buffs can get some semblance of Defense together they should at least have a winning season but I’ll be very surprised if Hawkins gets the 10 wins he predicted.

Kansas State- K State legend Bill Snyder returns to take the reigns in a stadium that is named after him. The Wildcats have struggled since their last conference title in 2003 and have a roster stocked with JUCO kids as Ron Prince kept up with Snyder’s tradition as a JUCO magnet. I expect the Cats will get some mileage out of Snyder’s return but I don’t expect any major overnight transformations. With 14 total returning starters they will be better but likely won’t be a factor in the division race. They play 3 patsies and UCLA in September then start conference play with Iowa State. They should be 4-1 before diving into the meat of their conference schedule where winning 2 of 7 could make them bowl eligible. Some genius scheduled them for 12 straight weeks without an open date so if they can’t win at least 2 of those 7 they will be turning in equipment before Thanksgiving.

Iowa State- Paul Rhoads and Gene Chzik swapped schools and in a way jobs as Rhoads takes over the Head Coaching job at Iowa State after being the DC at Auburn. Rhoads has 9 returning starters to work with on offense and 6 on defense but Ames is a tough place to win and I don’t expect anyone will ever be as successful there as Dan McCarney was. They should be better than last year when they only won 2 games but won’t be bowl eligible without a miracle. The Cyclones also play 12 straight games with no open date and will definitely be turning in their gear before Thanksgiving.

Big XII Wrap Up- Texas controls their own destiny in the South and next to Florida I see them as the next best pick to make an appearance in the BCS Championship Game. The Big XII is theirs to lose. The North could be a wild ride that goes all the way down to Thanksgiving weekend when Nebraska visits Colorado and Kansas faces Mizzu in KC. I think Nebraska will come out on top due to defense and a more manageable schedule against teams from the South but its going to be a fight. I'm looking forward to keeping an eye on that race.