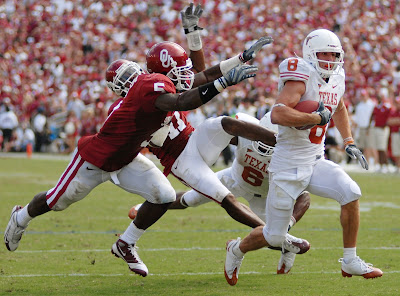 The Big XII South is among the toughest divisions in all of college football. In my opinion this division is a close 2nd to the SEC West. The Big XII South is home to two major power players in Texas and Oklahoma and Texas Tech has also emerged as a factor in the last few years. Heading into 2009 Oklahoma State is also looking to turn the corner amongst a lot of high expectations. Baylor is also on the way back up, and when I say back up in the case of the Bears I mean from like 1980 under Grant Teaff. In a cruel twist of fate Texas A&M; is bringing up the rear which is uncharted water for the Aggies.

Texas- For Mack Brown and Texas this is the year. If Mack is ever going to win another title this is his best shot. This team is loaded on Offense with 9 returning starters including Colt McCoy who is going to be a 4th year starter. I think McCoy has a big chip on his shoulder from playing 3rd fiddle to Tim Tebow and Sam Bradford in 2008. Quite frankly he’s right there with them. Not only has he been a great passer at Texas but he was also their leading rusher with 734 yards on the ground in 2008. That isn’t necessarily a good thing, but it is an added dimension he doesn't get enough credit for. I have seen McCoy live in his last two bowl games and both times I was impressed with his speed and overall ability running the football. He also possesses a true leadership quality and is one of those quarterbacks that just finds a way to win. Offensively Texas will be a juggernaut that is very difficult to slow down. The Horns do have some holes to fill on the defensive line but like the handful of other programs with Elite talent they will plug great athletes into those slots. Will Muschamp is a top flight DC that will quickly whip their attacking defense into shape. Their only vulnerability, especially early in the season, will be against a grinding run game. Fortunately for Texas they won’t face any semblance of one in September and few teams in the Big XII are designed to do that period. If I were playing Texas tomorrow I’d have a game plan full of 3-4 yard runs and plan on owning the clock to keep that offense on the field. If someone can execute that the Horns might have an issue but it likely won’t happen in September as they open with ULM, Wyoming, Texas Tech and UTEP. Texas should cruise to 4-0 but faces a tough slate in October with Colorado, Oklahoma, Missouri and Oklahoma State in succession. If they survive those four games they should win out in November, go on to win the Big XII and give Florida a run for their money in the title game.

Oklahoma- Many preseason polls and previews have OU in their top 5 and even winning the Big XII. I’m not buying into that. The Sooners lost 4 of 5 starters on their offensive line and their top two receivers. The Sooners do have Heisman winner Sam Bradford back at QB and Jermaine Gresham at Tight End. Both of those guys will play on Sundays for a long time but I expect that green offensive line will be their Achilles heel. I know Phil Steele is a big OL start guy and I’m on board with the importance of that stat. I expect them to struggle a bit by OU standards and when Bradford’s numbers are a little down the WWL crew will start commenting about "what’s wrong with him?" That scenario will make me want to throw things at the TV. Nothing will be wrong with him, he will be playing behind a green OL just like Georgia and Stafford did last year. Bradford will still be a Top 5 and perhaps #1 NFL draft pick but I’ll be surprised if OU makes it to the Big XII title game much less wins the conference. On the other side of the ball Brent Venables is a great Defensive Coordinator with 9 returning starters which will keep them in a lot of games, and will probably even be the difference in a few. They will need them to step up right off the bat to carry the load as the Sooners have both BYU and Miami in September. BYU won’t be a pushover and Miami is a team with great young talent that could present the Sooners some problems. I see Oklahoma losing one of those two games before they even get to conference play. I don’t see them beating Texas, and I expect they might have their hands full on the road in Lincoln as well. I also expect them to struggle closing out their final two games in Lubbock, where Texas Tech is very hard to beat, and at home against Oklahoma State. Overall I see the Sooners as a solid 2 loss team that most likely won’t play for a Big XII title.

Oklahoma State- Like Ole Miss the Cowboys are a true preseason media darling. OSU is not traditionally not a Top 10 football team and saying they will be is a bold and dangerous prediction. Their offense will continue to be great with 7 returning starters to include QB Zac Robinson, RB Kendall Hunter and WR Dez Bryant. Mike Gundy is a great offensive mind and the Cowboys actually run the ball often and effectively out of their variation of the spread which is fairly unique. They will continue to score a lot of points but their defense will likely prevent them from being a real Top 10 team. New DC Bill Young, who spent 2008 as the DC at Miami, has a great track record but will face some challenges in Stillwater. The Cowboys return only one starter from a secondary that was 110th in the nation against the pass in a pass happy league. As a result I don’t think the Cowboys will have the same kind of run Texas Tech had last year. Their schedule sets up in an interesting way though. If they can knock off Georgia in the opener they could be off to the races and should win the next six straight. Then in late Oct
ober they run into Texas, Texas Tech, Colorado and Oklahoma in 4 of their last 5 games. That schedule could potentially set itself up for a highly ranked early run that could end with a flameout. The Week 1 game vs. Georgia will be very telling for both teams.

Texas Tech- Mike Leach had a great year in 2008 for 11 games then the wheels came off in Norman. That was Leach’s best team yet with a veteran Offensive Line, Graham Harrell at QB and of course Michael Crabtree wreaking havoc at receiver. Crabtree was tough to cover and tougher to tackle, just ask Texas. Moving forward into 2009 all of those guys are gone and Leach has only 4 returning starters on offense Despite that fact I expect that to a degree Leach will be able to plug and play. Prior to Harrell Leach had what seemed like and endless procession of 5th year senior QB’s that could run his offense and I’m sure Taylor Potts will step in and do the same. Potts will likely throw for 4,000 yards and 50TDs like his predecessors in the Leach system. The OL will be a little green with only two returning starters but I don’t think that is as big of an issue for Tech as it is with most teams due to their scheme. With the crazy splits etc. their line doesn’t have to be great they just have to get in someone’s way long enough to let those passing lanes open up for that never ending series of 5-10 yard patterns. The Defense will most likely continue to be an issue despite having 7 returning starters. I’m not sold on Ruffin McNeil as the DC despite his cult hero status in Lubbock. The Raiders like to play shootouts and gave up just under 28pts per game last year which was their worst since 2003. They also have a tendency to have 1-2 massive Defensive collapses per year like they did at OU last year. I’ll never understand why Tech won’t shell out big money for a top line DC. With the offense they produce a top line DC could make the Raiders a real contender. Money talks and if AD Gerald Meyers could sell it to those cotton king boosters they might be in business! It will be interesting to see what happens with Leach going forward after the bizarre contract negotiation that followed last season but I expect he’ll stay put for a few more years. It works for him and vice versa. The Raiders play a very weak non-conference schedule that guarantees 4 wins and they will likely win half of their Big XII games. They should finish with 8 wins and a mid level bowl game in a "rebuilding" year.

Baylor- Art Briles is a very good coach. I have had my eye on him since he was winning State titles at the High School level in Stephenville Texas. He was a solid assistant at Texas Tech before moving to the Head job at Houston and now he is a Big XII Head Coach at Baylor. Briles is an up and comer that will be a candidate for bigger programs in the next few years. The Bears have 8 returning starters on both sides of the ball from a team that went 4-8 in 2008. Three of those losses were against UCONN, Missouri and Texas Tech by a combined total of 13 points. The Bears have a very dynamic QB in Robert Griffin who was the 2008 Big XII champ in the 400m hurdles. In the case of Griffin you are talking about a very, very fast college football player that can improvise and make things happen with his feet. He is also a decent passer which combined with his running ability creates a dilemma for opposing defenses. Their Defense is still a little sketchy but with 8 returning starters and Penn State transfer DT Phil Taylor in the mix they should improve in 2009. It has been a long time since the Bears have had a competitive football team in any real sense. They won’t be great but they will no longer be a doormat for the rest of the Big XII. The Bears play Wake Forest and UCONN in September and if they can win one of those two games they should be 3-1 heading into conference play. If they can take care of business against Texas A&M; and Iowa State they’ll only need one upset to become bowl eligible for the first time since 1994. I think it is very likely that it will happen.

Texas A&M-; In a strange turn of events the Aggies have swapped places with Baylor at the bottom of the Big XII South. The Franchione experiment did not go well and now Mike Sherman is entering his second season. I have to give the Ags a pass for a year with a total change of coaches and scheme but I definitely didn’t expect the drop off to be quite that significant. TAMU mustered all of 4 wins last year to include a 4 point nail biter against Army. Sherman does have a talented roster in College Station and with 10 returning starters on offense there should be significant improvement this season. If not the Aggies could potentially be looking at their 3rd coach in as many years. I expect they will take a positive step forward in 2009 which will make this division even tougher overall.