The week in news- Propaganda, "The Man" and ND 3 stars

Share All sharing options for: The week in news- Propaganda, "The Man" and ND 3 stars 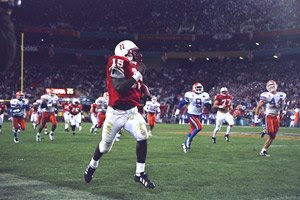 Paul Finebaum wrote a fairly over the top propaganda piece this week. He claims that Urban Meyer will almost assuredly take over as the Head Coach at Notre Dame following this season due to several reasons that are almost all tied to the belief that he will no longer be able to compete with Alabama. He also accuses Meyer of helping Utah game plan to beat Bama in last year's Sugar Bowl. Really, that debacle was the brain child of Meyer? Who knew. I could chew on this one for a while but instead I'll just say this is all very wishful thinking on his part.

Now that we took the "Red River Shootout" and lamed it into the "Red River Rivalry" to be PC we are going to campaign to take the cocktails out of the "World's Largest Outdoor Cocktail Party." How many more cool things can we try to make suck behind the veil of political correctness and safety? At this rate when my kids are grown they won't be able to leave the house without wearing a full body protective suit and oxygen tanks. That will be a good time.
Former Nebraska DC Charlie McBride was interviewed about his new duties as a member of the Harriss Interactive College Football Poll this week. In the interview McBride voices an interesting perspective to include calling the ESPN crew "performers."
Double Extra Point cut the impending Tim Tebow media love fest off at the pass with an early rebuttal this week comparing Tebow to Tommie Frazier. I have to agree that Touchdown Tommie absolutely deserves a place in the discussion. Tommie was serious and his 33-3 record as a starter is just sick.
The Mountain West backed Senator Orrin Hatch and his fight against the BCS in perfect fashion this week by signing on for another four years of the current system. "The repercussions were just too dramatic and too costly," Boise State president Bob Kustra said. "Can you really take that chance?" Going forward the Mountain West will simply refer to the BCS as "The Man." The Wiz of Odds summed it all up very nicely.
Former Notre Dame Tight End Joseph Fauria has chosen UCLA as his new school of choice.
The Notre Dame commitment wave continued in earnest this week with the commitment of 3 star Defensive End Justin Utupo and 3 star Quarterback Tommy Rees. Interestingly this ignited some good debates amongst Irish fans about whether or not these 3 star commits should be a cause for concern. Her Loyal Sons came up with the best perspective on the matter that I saw this week with a post titled Star Power. I agree with HLS but also think the ultimate quality of this particular class will be tied directly to on field performance in 2009. If Weis and company perform at their capability level this fall the recruiting class will fall right in line and all will be right with the world. If they stumble the Irish will have much bigger issues than the potential of a handful of 3 star recruits.