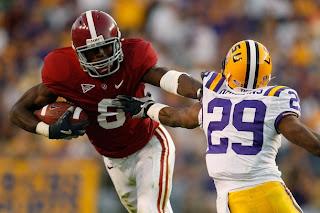 In my opinion the SEC West will be the toughest division in college football during the 2009 campaign. Check it out.

LSU- Les Miles is effective as a Head Coach because he is smart enough to surround himself with great assistants then he lets them do their thing. He lost Bo Pelini to the Head Coaching job at Nebraska after the 2007 title run and the Tigers subsequently struggled on Defense last year but he picked up John Chavis from Tennessee, who happens to be a great Defensive Coordinator. As a result I expect the Tiger Defense to quickly return to form this year. Miles and OC Gary Crowton finally figured out that they have a QB in Jordan Jefferson and have added highly touted Russell Shepherd to the mix. Right now they are talking about using Shepherd like VT used Marcus Vick initially as a slot receiver and decoy. Shepherd doesn’t seem like the kind of kid that will be content to sit on the bench for 3 years behind Jefferson so it will be interesting to see how that plays out over time. Miles has elite talent on this team and they will absolutely contend for the West title and host what should be a massive game vs. Florida on October 10th in Red Stick but the trip to Tuscaloosa on November 7th could determine the divisional crown. In the mean time Miles will still be a riverboat gambler going for it on 4th when it makes no sense and generally rolling the dice. Sometimes it will work sometimes it won’t. Regardless the Bayou Bengals will give Alabama and potentially Florida a run for their money.

Alabama- When it comes to Nick Saban you can love him or hate him but he is a great college football coach. Saban had a great second season in Tuscaloosa and came very close to playing in the BCS Championship Game. Granted he gave Orrin Hatch and the rest of his cronies plenty of off season ammo by blowing the Sugar Bowl in spectacular fashion but it was a great second year campaign nonetheless. Saban inherited a roster with Great talent and has built on that even further with consecutive top ranked classes. The Tide return only 4 offensive starters with two being receivers and two being offensive linemen. That could result in a slow start offensively but with 9 returning starters on a defense that only allowed 14pts per game the offense doesn’t need to be a juggernaut to secure W’s. Everything Saban does is predicated on controlling the line of scrimmage and I suspect the Tide will continue to do just that. The package is a little vanilla but they are very athletic and very well coached. As a result the Tide should battle LSU for the Divisional crown. As a side note they are again scheduled for the Week 1 Game of the Week, this time vs. a Virginia Tech squad that most prognosticators are picking to win the ACC.

Mississippi- Oklahoma State and Ole Miss are both preseason media darlings as far as bold prognostications go. In the case of Ole Miss they are riding the wave of having upset Florida in The Swamp and closing out the season by beating a Texas Tech team that showed up at the Cotton Bowl flat and still licking its wounds after losing their title shot in spectacular fashion just a few weeks prior in Norman. The Rebels do return 8 starters on both sides of the ball and Jevan Snead at Quarterback is the real deal in addition to being the hero of transfer Quarterbacks everywhere. Leaving Texas when he lost out to Colt McCoy has worked out pretty well for him. The Rebels will be a solid football team as Nutt is a pretty effective game day coach with good talent on the roster that has been stockpiled by oversigning for the last few years. The Rebels draw South Carolina, Vandy, and Tennessee from the East and have four patsies in non-conference play so they will make or break themselves within their own division. Of note Nutt and company have agreed to be the subject of a new reality TV series called "Gridiron U." With that he has officially jinxed himself. Call up Ty Willingham and ask him how that worked out in his second year at ND.

Arkansas- I see the Razorbacks as a sure spoiler in
the SEC. Bobby Petrino enters his second year with 18 returning starters and a real Quarterback in Michigan transfer Ryan Mallett. The Hogs played with one of the youngest rosters in the country last year and all of those kids are back. I think you will see a surprising resurgence from Arkansas and though they won’t likely win the West they should cause some problems and score a few upsets along the way. Love him or hate him Petrino is effective and he will be at Arkansas, it is really just a matter of time.

Auburn- Gene Chzik returns to Auburn where he was last the DC during their undefeated 2004 campaign. After one season as the DC at Texas during their 2005 title campaign he took over at Iowa State where he was unable to make the miracle happen. Dan McCarney did pretty well there and no one will probably ever do that well again. At Auburn Chzik inherits great talent and picked up Gus Malzahn as his Offensive Coordinator. Malzahn was the OC at Arkansas under Nutt prior to the drama that resulted in a wave of player transfers, Nutt leaving for Ole Miss and Malzahn jumping ship to Tulsa. Chzik is a great defensive mind and Malzahn is a great offensive mind which could quickly get the Tigers back on track. All the "Wildcat" formation craze in the NFL started with Malzahn during his season at Arkansas. Auburn had a strange season last year with the crazy offensive scheme change and subsequent firing of newly hired OC Tony Franklin mid season. The end result was that the Tigers struggled offensively all season never finding an identity. If Chzik and Malzahn can get everything installed and get the players back on an even keel mentally they could potentially be back in the mix quicker than anyone thinks. For 2009 I expect they will hover around the middle of the pack in the SEC West and like Arkansas win a few games they aren't supposed to.

Mississippi State- Dan Mullen takes over as the Head Coach and is facing a very uphill climb. I expect the Mullen will install something similar to what Florida runs on offense but don’t expect any flashes of Wayne Madkin or Dicenzo Miller anytime soon. Making the Bulldogs a contender in the SEC is going to be a very difficult climb for Mullen and they will definitely struggle in 2009.