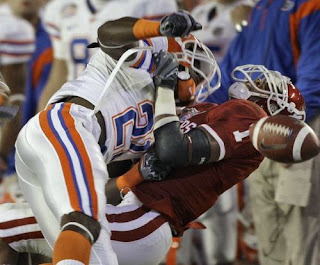 The SEC is home to several of the biggest programs and personalities in all of college football. The SEC is widely regarded as the strongest conference in the country having won 4 of the last 6 BCS championships to include the last 3. As a conference the SEC has also dominated the recruiting rankings the last several years and collectively sits on an impressive stockpile of raw talent with an emphasis on speed. It has become almost automatic that the SEC champs will play in the BCS Championship Game. That scenario is highly likely again this year as well. I’ll start by taking a look at the SEC East

Florida- The Gators are almost a consensus pick to return to the BCS Championship Game in 2009 with good reason. Urban Meyer has stockpiled a roster with a surplus of elite talent while winning two titles in four seasons. Tim Tebow is back to lead an offense with seven returning starters and several front line playmakers. Offensive Coordinator Dan Mullen left to take the head job at Miss State but the Gators shouldn’t miss a beat as Steve Addazio was promoted from within and at the end of the day it is really Meyer’s offense anyway. The really scary part about the 2009 Gators is that they return all 11 starters from the defense that kept a ridiculously prolific Oklahoma offense in check during the BCS Championship Game last January. Defensive Coordinator Charlie Strong is also one of the best in the business. The media hype behind the Gators and Tebow this fall might trump all levels of ridiculousness previously seen. The Gators badly want to go undefeated for the first time in school history but they will have a huge target on their chests as they pursue it. They should run the table in the SEC East and draw LSU, Arkansas and Mississippi State from the SEC West. In addition they have three patsies and Florida State in non-conference play. This is a very manageable schedule for the Gators who will settle into the driver’s seat if they can pull out a win at Red Stick on October 10th. Regardless of how that game goes Florida will likely still play in the SEC Championship game with an opportunity to go to Pasadena.

Georgia- The 2008 Georgia team had their marquee guys back with a very green offensive line and it showed. Richt has been a great recruiter and coach there but thus far he is on pace to be the next Bo Schembechler consistently heading up a very good teams that annually drop 1-3 games. This year the Bulldogs replace Stafford and Moreno but have 5 returning starters on the offensive line and a solid corps of receivers. Don’t expect crazy numbers out Senior QB Joe Cox but he doesn’t have to do anything amazing he just needs to manage the game. Richt has also stockpiled a roster of elite talent and will have another very solid season.

Tennessee- Lane Kiffin has been all over the news this off season and now needs to show improvement on the field. Kiffin takes over a team that really struggled offensively last year under Fulmer despite having a great defense. It will be very interesting to see how the Defense progresses under Lane’s Dad Monte Kiffin who has a stellar reputation as a defensive mind after many years in the NFL. Modern day college offenses are a different animal and I’ll be interested to see how the elder Kiffin attacks them. Kiffin picked up a great recruiting class in a program that already had great talent. Year one is tough for any coach and may be tougher for Kiffin as he seems to have quickly made enemies with all the power players in the SEC. As a result the Vols likely has a few beat downs in the mail to include an early date at the Swamp that I expect to get ugly at Kiffin’s expense. Having drawn Alabama, Ole Miss and Auburn out of the West I think Kiffin likely has a 7 win ceiling in his inaugural campaign.

South Carolina- Bryce Williams Stadium is cursed. Holtz couldn’t do it there, and thus far Spurrier hasn’t done it there either. The Gamecocks had 7 players taken in the NFL draft this spring after a 7-5 campaign in 2008. Strangely Spurrier has been unable to get any consistent play out of a QB yet. Spurrier has great talent on his roster but as of yet that hasn’t made much of a difference. With only 5 returning starters on offense and 7 on defense I expect the struggles will continue. You know Spurrier is working it but I’m expecting 7-8 wins max.

Kentucky- The Wildcats have only 12 returning starters but under Rich Brooks this team seems to consistently over achieve. The Wildcats generally play most of the SEC close and are usually good for 1-2 upsets a year. Kentucky has a soft non-conference schedule and should be able to put together a bowl run if they can pull off a couple of upsets in the SEC.

Vanderbilt- The Commodores have been the whipping post of the SEC for what seems like eternity but have 17 returning starters overall. They could po
tentially be bowl eligible due to a soft non-conference schedule but will continue to struggle in SEC play despite their experience level.