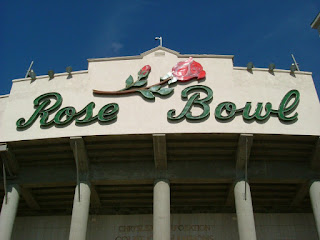 Welcome to the first installment of the OFD 2009 Preseason Preview. With practice kicking off in less than a month and opening weekend only two months away I will be ramping up by taking a look at every FBS conference in the country and plan to comment on most if not all of the teams. After my initial review I think we are in store for a very interesting 2009 college football season. With a couple of notable exceptions several conferences and divisions look like they are setting up for some pretty wide open races. It should make for some great football down the stretch for fans across the country as several games that don’t necessarily look "big" right now will shape up to be just that. As an example when Notre Dame rolls into Stanford at the end of November it could potentially have major BCS implications for the Irish and several other fringe BCS teams as well. With several BCS conferences up for grabs and a couple of new BCS busters looming on the horizon in the Non-BCS conferences we might all be sitting here looking at some highly interesting and non-traditional matchups when the BCS lineup is announced in early December. My favorite part about the preseason is that anything is possible for fans of every team and I think the 2009 campaign will deliver in that regard. Who will end up in Pasadena playing for all the marbles? It might not be who we expect. I can’t wait to watch it!

Throughout this preview I will refer to the overall talent level of several of the teams as I discuss them. The basis for those comments is the 2009 Talent Analysis that I posted earlier in the spring. For those of you interested in the detailed version of that diatribe you can find it in the right sidebar under "OFD Greatest Hits" or by following THIS LINK. Once you are there scroll to the bottom if you want to start from the beginning. There are two spreadsheets linked in that first post that average out the recruiting rankings of every team in the country for the last five years. One is weighted by class and one is not. Interestingly enough there is little difference between the two. For those of you interested in such things apologies in advance if you don’t accomplish anything else today after you start perusing them.

With that I will get to the business of taking a look around the country in this inaugural OFD Preseason Preview. I’ll kick it off with the SEC starting tomorrow. For my regular readers I will also continue to post about news from around the country and keep a close eye on any and all developments out of South Bend. It is time to ramp it up for the start of the season!