The week in news- Move Complete, Catching Up and Independence

Share All sharing options for: The week in news- Move Complete, Catching Up and Independence 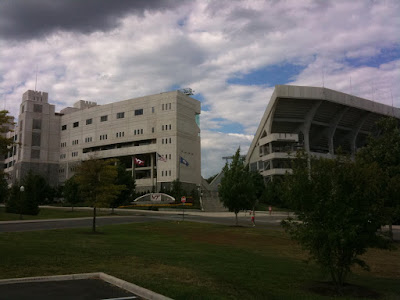 2600 miles later OFD is now setting up shop in Northern Virginia. It was a good trip across the country that started in the Southwest Arizona desert and ended in the burbs to the South of DC. After spending the last several years in Southern California and Arizona this humidity is brutal! It has been a while since I was back on this side of the Mississippi in the summer. By the time I finished unloading yesterday I felt like I'd been worked over by a Top 10 defense.

I hit several college football towns during the journey and made an honest effort to to mingle with the locals a bit in the evenings to see what people thought about the upcoming season. The towns that seemed the most excited about their prospects in 2009 were the Texas Tech fans in Lubbock, the Tennessee fans in Knoxville and the Hokie fans in Blacksburg. Everywhere else it was pretty quiet but I have to remind myself that it is still over a moth until training camp gets fired up and only the hard cores are talking college football this time of year. I did my best to check out all the stadiums along the way as well, and I have to say that Lane Stadium in Blacksburg looks pretty sweet. I have a brother-in-law who is a psycho Hokie that has been all over my case for years now about getting to Blacksburg for a dose of the Fightin' Gobblers coming out of the tunnel to Enter Sandman in person. I'll probably have to take him up on that this fall since I'm pseudo in the area.

With that said I'll get back to catching up with the latest and greatest in college football from amongst the boxes. I'll start in South Bend. There has been a ton of Irish news the last couple of weeks and I posted about the Fauria situation from the road on Monday. I touched on some other Irish news in the intro to that post and if there is anything else I missed you can find it by visiting most any of the ND Bloggers linked in my right side bar. There are two things I haven't mentioned yet that I'll cover quickly. For starters the ND Freshmen jersey numbers were released which always gets me a little hyped up. It just puts an official stamp on the fact that the teams are all back on campus getting ready for the season. It also means I can unscrew my roster when I pick up a copy of NCAA 2010. The other is that the Notre Dame Training Camp dates have been released. After the weekend we'll only be a month out!

As for the rest of the country things have been pretty slow. Here are a few quick hits that caught my eye.

On the EA Sports NCAA Football video game ticker two guys I don't remember have jumped on the Sam Keller bandwagon and are suing EA for using their "likeness" in the game. Seriously, if someone makes a video game using your "likeness" that is bad ass! Don't sue them just be happy, drink beer and show your friends and anyone else you can rope into it. "Dude check it out this is me on this video game!" These guys should just roll like Mickey Rourke did in The Wrestler when he got neighborhood kids to come over to his trailer to play his old 8 bit NES wrestling game with him as himself. Ram Jam! I'll never get this one. Their respective schools probably used to sell "their" jerseys too. Are they suing them? You got a free education, and you knew the deal. The only thing these guys should be worrying about is how they'll play the old versions of these games on the new systems. I'd be trying to figure out a way I could make sure and show my grand kids. The guy from Cal really blows my mind. He played in the 80's when this game wasn't even an idea. Was he on a Cal "All time team" on one of the older versions of the game or something? Whatever.

Orrin Hatch is pounding his fist again. Good thing we don't have anything more pressing going on for these guys to worry about. I'll lay off the BCS Discussion I already said my piece.

Florida State is still trying to get Bowden his wins back. I wonder if Joe Pa calls him up and talks smack to him about it?

Thing are so slow right now that the WWL ran a picture today of Mack Brown and Bob Stoops surrounded by fake fire for their "Red Hot Rivalries" piece. Is there really a guy at ESPN getting paid to come up with ideas like "Hey I know, let's get a picture of them then add some fake fire, it's going to look killer!" Pictures should only be doctored for jokes.

Now go celebrate Independence Day! OC Domer always kicks off these holiday weekends right so go check him out before you get too busy with your cook outs and fireworks. By the way, I saw the biggest fireworks stand I've ever seen in Knoxville Tennessee the other day. It was serious. I'm thinking Coach O went nuts in there. I'll be back up next week delving into my take on the upcoming season. Enjoy the weekend!