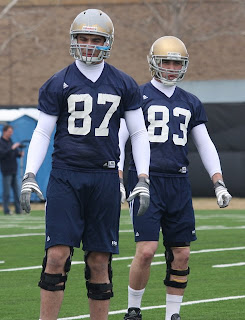 As I have been traveling across the country the last week there has been a flurry of activity out of South Bend that is rivaled by no other program in the nation at the end of June. There has been a wave of commitments from Hendrix, Leuders, Wood and now Badger. There has also been a re-commitment of sorts from Chris Martin. The great Subway Domer summed it all up the best on the back side of his vacation yesterday. In the midst of all this drama the one semester suspension and subsequent transfer of TE Joseph Fauria has been the subject of the most controversy and debate. TDS posted about it on Saturday and stirred up a full fledged wild fire in the process. Nice work on that by the way. To echo the sentiments of OC Domer TDS really has been on fire lately. Now back on point. I have had a lot of time to ponder this Fauria scenario the last couple of days as I drove across the better part of Oklahoma, Arkansas and Tennessee. I only saw one Lane Kiffin billboard in Knoxville by the way. So here's where I'm at.

It appears that the majority of Notre Dame fans are of the opinion that Fauria got hosed by Res Life and that this injustice will have far reaching negative ramifications for both the University and the Program. My initial reaction was pretty similar, especially in the wake of Yeatman. Then I thought about it for a while and once I got over being a fan who was annoyed about the blow to the depth chart I reminded myself of a couple of things.
For starters I was absolutely that "fun loving" guy myself and it wasn't that long ago. But at some point you realize that there is a time, place and situation for all of those things. Part of that is due to a change in what society as a whole deems acceptable. When I was a kid I got into more fist fights than I care to remember. That was pretty normal where I grew up. All I ever got out of it was a few licks or maybe some extra running after practice. No big deal. If a kid does that now it is an assault charge. Real cops, real consequences. The other part is that there are things you can do in places like a locker room that you just can't do elsewhere. In the locker room you can jokingly jump on your buddy naked and punch him in the ribs while swearing at him. He's disgusted and everyone else laughs like it is the funniest thing in the world. Do that to some random kid in the hallway of the dorm and you might end up in jail. That is essentially the definition of situational awareness. There is a time and a place. Just a random example by the way. No intent to make any comparisons to what Fauria did or did not allegedly do.
The next thing I thought about was great organizations. What one thing do all great organizations have in common? They all have known standards and they actually enforce them. In doing so they maintain the integrity the organization as a whole. The enforcing of those standards is also what keeps the members of that organization performing at a level that is higher than other similar organizations. Hence the overall superiority of the organization is maintained. This is true within the military, select corporations and even institutions of higher learning like Notre Dame. That is not to say it is a perfect system. Any defense contractor will tell you no perfect system is perfect 100% of the time.
So can we debate about a case like Fauria? Absolutely. Did he, the team and to a degree the fans all get screwed by Res Life? Maybe so. It sucks to lose a kid with that kind of potential at a position that is critical in the Weis offense. After the spring he had I thought he might explode this fall. But at the end of the day the kid put himself in a vulnerable position and the organization enforced the standard. At that point Fauria had a decision to make and he decided to leave. He could have taken a semester off, regained a year of eligibility and come back. Walls and Gray did it. Granted for different reasons but they did it. I would have loved to see Fauria as a 1,000 yard 10 TD tight end during a 2012 title run. But I won't. At least not at Notre Dame.
So who do we blame for this? As fans we want to be able to point the finger at someone. Res Life is a convenient answer. I understand why so many fans are in an uproar. But the horrible truth is that we can all sit here and armchair quarterback this thing the rest of the summer because we didn't have to make the decision nor do any of us really know all the details of what happened. I do feel bad for Fauria and like Yeatman I wish him the best. I hope some day down the road he's better off as a person for having experienced it. In the mean time I'll be rooting like hell for Rudolph and Ragone to stay healthy and for Bobby Burger to step up. Maybe we'll even get a nice surprise from one of the Freshmen. The University of Notre Dame and its football program have built a great reputation based on a higher standard. And although no perfect system is perfect 100% of the time that standard is the basis of that greatness. Even if we don't always agree with the way in which it is enforced.