The week in news- Webfoot U, ND Madness, and The Road Warrior

Share All sharing options for: The week in news- Webfoot U, ND Madness, and The Road Warrior 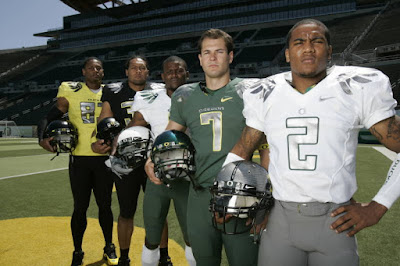 I'll give you the short version this week. After stopping to see some family in Texas the Team Whiskey move convoy is about to kick it into high gear for the big finish. Meanwhile due to modern technology here are the things I saw this week that I found to be the most interesting. Without further adieu.

Webfoot U (Nike) has once again re-designed their already ludicrous combination of uniforms. The latest version is a little less Donald and more Darkwing. They have replaced the steel truck bumper prints on the shoulders with a "duck wing" pattern and appear to have ditched most of the fluorescent yellow with a color they are calling chrome. Whatever. They are still heinous.

The BCS officially shot down the Mountain West playoff proposal. No surprise there. It will be interesting to see how this plays out over time.

There is a ton of Notre Dame news this week, most of which has already been expertly commented on by the group of strong ND Bloggers I have linked in my right side bar. I get on the road in the heart of the "dead season" and South Bend went mad. With that here is my two cents on the biggest Irish news items of the week. For starters Eric Hansen wrote an article commenting on the Irish depth chart. There was also a great post on The Rock Report about the development of Jimmy Clausen. The more I think about this team the more I believe that 2009 has the potential to be a very special season. For the first time in a long time the Irish have both high level talent and some valuable experience. Those two things combined with some key assistant coaching upgrades make the 2009 version of the Irish a contender. At least on paper. The final ingredient that remains to be seen is an upgrade in what I like to call "program health." That is the players, coaches and everyone else in the program getting on board for the big win. Put more simply they all need to start believing they can be a great team and play like it. The Rock actually summed that up quite nicely this week as well. I couldn't agree more. We won't know whether or not that has occurred until we see it live on the field but I expect it will happen. I suppose you could say I already drank the Kool-Aid and have alluded to such several times now here in my posts. I had a lengthy discussion about all of this with "The Coach" a.k.a. my father on his back porch this week and we're both pushing the "I believe" button. It is time.

In other Irish news backup TE Joseph Fauria will miss the 2009 season for personal reasons. HLS has a solid post on why this is potentially a bigger issue than one might think. On the recruiting front the Irish also had a very busy week. I'll start with the "bad news." Early DE commit Chris Martin announced that he will be taking other visits. He now falls into Charlie's "If you're looking we're looking" category. Regardless this rarely ends well for the team originally committed to. Right on cue four star DE Blake Leuders stepped in and gave Coach Weis a solid verbal. Meanwhile QB Andrew Hendrix also jumped in the mix and giving the staff a solid QB commit for this class. I hope things work out with Martin but at the end of the day until any of these kids sign everything is written in Jell-O. If the Irish have a solid season on the field in 2009 this recruiting class will fall right in line and the momentum behind the entire program will be huge. I'll get into my full on preseason preview in a couple of weeks but my initial take is that this is going to be a wild and wide open season. With a few obvious exceptions many conference and divisional races are up for grabs. I think in the end that will create some interesting opportunities in the post season that a team like Notre Dame can take advantage of. I can't wait to start watching it.

As for the Whiskey move convoy so far so good. If anyone needs the gouge on how to expertly load a moving truck I have some Excel spreadsheets that will change your life. Driving that thing is painful but I try to remind myself that it could always be worse. I could be driving a gas tanker full of sand while a bunch of random dudes in dune buggies sporting mohawks and random sports equipment try to take me out. I'm in Lubbock, Texas today and as soon as I finish typing I'm going out in search of the Dread Pirate and a Chicken Fry. Back on the road tomorrow.