Share All sharing options for: Scheduling- The Cupcake Debate 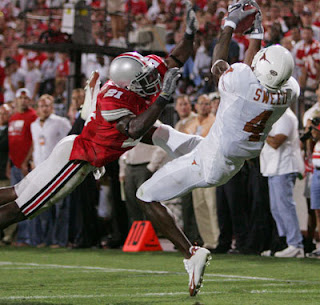 Scheduling has been the subject of much debate and conversation all over the web the last couple of weeks. It seems like every major media outlet has been talking about who the biggest offenders are when it comes to scheduling cupcakes. I won’t begin to try and link all of it but there are a couple of articles that are worth checking out. The WWL has this one from Mark Schlabach which takes a look at team schedules from a national perspective. There is also this one from Jon Solomon of the Birmingham News that focuses on the SEC in the article itself but also has a data base linked in it that examines schedule strength for every team in the country if you care to look them all up. The whole issue makes for an interesting discussion point so I’ll throw my two cents in there. Most of the other bloggers linked in my right side bar have already done so. I touched on some of this when I discussed the Notre Dame schedule in my "Week in news" post on May 29th so I’ll try not to rehash all of that. The Notre Dame schedule is a unique animal in of itself due to the Irish being an Independent. Overall this issue is complex and has no clear cut solution. Here’s why.

As fans we all want it all. We want to see great non-conference games and we also want our teams to contend for the National Title. The Athletic Directors who do the scheduling have some difficult choices to make in addition to obvious basic challenges like making dates and availability line up. When scheduling non-conference games AD’s are left choosing between an attractive home and home with a solid program from another conference or paying a non BCS or FCS opponent somewhere between 500k and a cool million to show up at your place for a one time beat down. The former can work out great if all goes well. The winners of the 2005 and 2006 Texas vs. Ohio State matchups both ended up playing for the National Title and those respective early season wins boosted their legitimacy in the polls. Conversely the same tactic backfired on the Buckeyes, and the Big Ten in general, last fall when USC put an early season beat down on Ohio State at the Coliseum. That takes us back to the less risky option to schedule a cupcake, sell 80,000 tickets and take your chances in the polls based on your conference schedule. The fan bases don't necessarily like it that Saturday but come bowl season they are happy to have an extra W and a trip to a better bowl game. Perception is reality with fickle fan bases and at the end of the day 10-2 with a couple of cupcake wins looks better than 8-4 with a couple of close losses in great games. That is particularly true when selling the "state of the program" to boosters. It shouldn't be that way but it is. This route is also an easier option for teams that are members of the stronger conferences. The SEC and Big XII can get away with it. The less the perceived strength of your conference the more risky not playing good non-conference opponents becomes. For Non-BCS conference teams these quality non-conference matchups are a must to have any chance at a title shot. The crux of the issue is that the teams that need to play quality non-conference games really need to play them against the teams that don’t need to play them. And therein lies the rub.

Some teams like Virginia Tech will continue to schedule aggressively in non-conference play. This suits a team like the Hokies that is still chasing another shot at winning their first national championship. If they can run the table in the ACC with a tough non-conference schedule they minimize their chances of getting left out of a title shot should they pull it off. Meanwhile Kansas State and Texas Tech will continue to warmup against a slate of FCS foes and most likely get away with it. At a minimum they will probably pick up 4 of their required 6 wins to become bowl eligible out of conference. As a fan I obviously prefer the way Virginia Tech does it. You don't want to create an impossible schedule but 2 of 4 non-conference games against quality opponents is good stuff.

The one thing the NCAA could do that would really have an impact on this issue would be to stop recognizing wins vs. FCS opponents for bowl eligibility. That would at least keep it a little more respectable. It will never happen because someone will raise hell in some capacity or another and it would most likely be the cupcakes themselves. Some FCS schools in particular need the payouts from those beat downs for their athletic programs to survive. With that aspect thrown in the vicious cycle is complete. I suppose the NCAA could also limit the total number of home games that any one team is allowed to play but that plays into the same argument. As fans the best we can hope for is more teams hanging it out there and scheduling at least 1-2 quality non-conference opponents. There is a lot of intrigue in those matchups. In the mean time I’ll be looking forward to some of the good non-conference games that are on the slate for 2009. Oregon and Boise State are slated to be the Thursday night game to kick off the season Sept 3rd. I’m down with that. Is it really still that far away!