Tim Floyd- Fall guy or tip of the iceberg?

Share All sharing options for: Tim Floyd- Fall guy or tip of the iceberg? 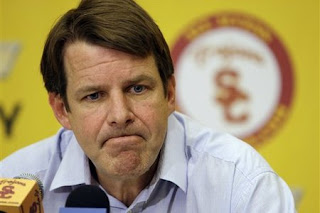 I was all set to post about something else entirely this evening when I saw that USC Basketball Coach Tim Floyd resigned this afternoon. HLS lead the charge for the ND Bloggers a couple of hours ago. I expect by tomorrow morning blogs, message boards and the mainstream media will be burning up the internet with speculation about what this means in regards to the ongoing NCAA investigation of USC for "lack of institutional control." The WWL article has some interesting tidbits in it but the Pete Carroll quote below from a couple of weeks ago best summarizes his line of thinking.

Carroll said when he first got to USC his goal was to build a program where "everyone was coming after us. Be careful what you wish for," he said, according to the newspaper.
This is a weak defense taught in excuse making 101 and often used by individuals who are shrouded in controversy and unwilling to accept any blame for their personal actions. Not to mention the context in which he uses it is completely off. We aren't talking about accusations made by rival programs tired of losing to USC. This is the NCAA who really stands nothing to gain at all should they levy sanctions on the Trojans. Enough on that. The Floyd resignation itself is significant in many ways. For starters it has forced USC to break their long silence regarding the investigation which is not good for them. Once everyone starts talking it is always hard for everyone to keep their story straight. It is also the first real result/ side effect of the investigation felt by the university. Floyd and USC can collectively give 1000 reasons why he resigned but everyone and their brother knows that the investigation is the real one. USC might have been, and may still be, hoping Floyd would ultimately be their fall guy. By resigning he may have stolen some of their potential thunder in that regard. Then again by the time all is said and done Floyd resigning may just be the tip of the iceberg.
I already said my piece on this last week in the "Who Me?" and "Character..." posts and my thoughts remain the same. I have now wasted way too much time talking Trojans the last few days so I'm off it. This development was just too big not to mention it. I'll be looking forward to reading what everyone else has to say about it in the next few days. Now back to college football!