Share All sharing options for: The week in news- New Uniforms, "Buy Games" and ND Scoreboards 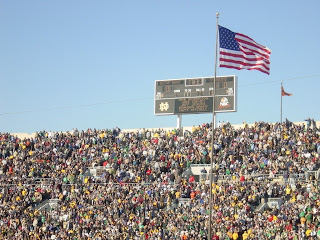 My apologies I know it has been a little slow around here the last couple of weeks. I have been knee deep in final preparations to move across the country later this month. If anyone needs any tips on how to expertly load a moving truck I think I have cracked the code super nerd style. I'll let you know how it works out on the back side. With that here is what I found interesting in the news this week.

More news about new uniforms got out this week. Dr. Saturday had the scoop on the new duds at Boise State, Washington and Mississippi State. In addition the guys over at the WSU Football Blog made an interesting discovery. EA Sports NCAA Football 2010 has a new feature that will let you create a team. Since the game itself is not out yet you can currently tinker around with the new feature online. One of the loopholes is that you can look at the uniforms of current teams while doing it. Hence the new Wazzu unis have been inadvertently discovered as a result. If you suspect your team might be switching it up you might check it out.
The Wiz of Odds had an interesting post on Boone Pickens Thursday that gave me added motivation to become a ludicrous rich booster. Boone has so much pull at Oklahoma State that he apparently summoned the coaching staff to his Texas ranch to brainstorm on how to get better and win games. How completely kick ass would that be? "Coach Weis, yeah Whiskey here, hey I'm going to need you and the staff to report to my ranch Saturday morning so we can discuss the upcoming season." "I'll throw some steaks on the grill and get the film room ready." One can only dream.
I talked a little last week about the preseason mags hitting the shelves. I was on the road for a couple of days this week and took Athlon Sports preseason edition with me. I read the whole thing and found it to be pretty entertaining since it was college football information in June. As for what it actually said I thought it was mainly out to lunch. When I got home Wednesday Phil Steele's preview was in the mailbox. I'm still wading through that beast but needless to say there is some pretty interesting stuff in Steele's 328 pages of 6 point font that coincidentally set the web ablaze this week. EDSBS has a good general wrap up of some of the big head scratchers and TDS has a good wrap up of all the ND specific info. I'll get back to these mags with a dedicated post in the next few days.
The "buy games" that major programs set up to notch an easy victory at home against an over matched FBS, or more often FCS team, are pretty much the lamest thing in all of college football. Interestingly enough both Georgia and West Virginia are running into problems as the price of those games is skyrocketing. This could potentially have a positive effect if it results in teams starting to consider more quality home and home deals. Perhaps if it trends back in that direction ND will eventually ditch the 7-4-1 model and follow suit. Yeah right. Speaking of ND Purdue is looking to keep their series with the Fighting Irish going. I'll lay off the ND sked this week. On a similar front USC settled on another home and home with Hawaii. It won't be pretty but in some way it is still better than one "buy game" at the Coliseum.
Boston College will be without the services of QB Dominique Davis this fall due to academic issues. This leaves Spaziani's crew pretty green at QB heading into the season. Speaking of attrition.....
Dan Hawkins is living through some attrition of his own at Colorado. Hawkins is an interesting case heading into his fourth season in Boulder sporting a 13-24 record while Boise State plugs along apparently unfazed by his departure. The Big XII North is relatively wide open this year so I'll be interested to see if he gets the 10 wins he predicted.
Over the weekend Florida Corner Janoris Jenkins fought five dudes, took a Taser shot from Gainesville Police then jumped up and ran off. I'll admit that when I first saw this the first thing that
crossed my mind was not that article from last week about the 24 arrests under Meyer or anything else of that nature. I honestly marveled at what a tough kid Jenkins must be. Seriously. Five dudes and a Taser shot! That is hard.
Notre Dame is replacing the scoreboards in Notre Dame Stadium and at least one is being auctioned off. Strange to say the least on the auction bit. We Is Notre Dame has an excellent post on the issue with a perspective that I agree with completely. The FWJG at least diffused the potential rumors that the hotly contested Jumbotrons might be making an appearance. Let's hope that is accurate. The general rule on Notre Dame Stadium should be in step with the rule about Jefferson's car in Fast Times at Ridgemont High. Don't Fu@# with it!