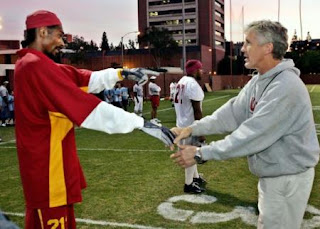 There was an interesting article in the Los Angeles Times today about the ongoing investigation of USC for "loss of institutional control." The piece focuses on the fact that the school has been essentially silent throughout the duration of the process. This investigation has been going on so long that it is easy to forget about it completely. Maybe that's the USC angle and they have it all figured out. It is an interesting strategy. It seems like Lane Kiffin self reports some minor something or other on an almost weekly basis. Thus far all of Kiffin's infractions were more comical than anything else and in reality he hasn't been guilty of much more than stirring the pot. But the accusations and numbers attached to this USC investigation are pretty staggering. With all the evidence that appears to be out there I think that sanctions are inevitable at some point. In the mean time the Trojans will most likely keep rolling along, acting like they don't have a care in the world. Regardless of what the outcome is with this particular investigation I still say that if you run a really loose program it will catch up with you eventually. I don't think this ends well for USC. Then again the "who me" routine has kept them sanction free for three years now.