Share All sharing options for: The week in news- Helmets, Assorted Coaches and ND Schedule Stuff 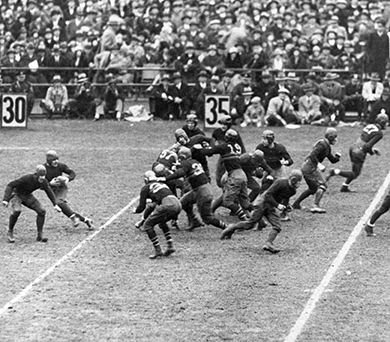 New Mexico State Head Coach Dewayne Walker is rolling out new helmets for the 2009 season. Walker ditched the traditional White helmet with "Aggies" on the side for something that looks a lot like the Rutgers helmet to me. Walker commented that "We wanted to try and create some consistency and establish a traditional look like USC or Nebraska." Apparently the Las Cruces Police Department doesn’t like the new lids very much. They gave Coach Walker a full on shakedown over Memorial Day Weekend. That will teach him to mess with Aggie tradition!

SI’s Andy Staples took a look at the geographic locations of the players currently being considered for the US Army All-American Bowl and came to some fairly obvious conclusions. It is interesting to see it on a map though. I have to think the system by which these kids are selected is slightly flawed though. For example, all the kids identified in Texas are in the Dallas and Houston areas. I'm pretty sure there are some serious football players in the rest of the state as well. Call me crazy.

Nebraska Head Coach Bo Pelini says he’s against an early signing period. He has some valid points here. It would be difficult to cram it in during the season while you are busy trying to win games. You might be able to do it in August before the season starts but that will also be a tough sell. There is no "right" answer to this debate and it is unlikely we’ll ever see an early signing period as a result.

The Big 11 made a few appearances this week and tossed some spears around. First Commish Jim Delaney took President Obama to task on the playoff debate saying "I don't think he really understands the complexity of the issue." Strong. Joe Pa followed that up with a few doozies of his own when asked about the 12th team he would like to see join the Big 11. After suggesting Rutgers, Pitt or Syracuse he mentioned that there might be "pressure to add Notre Dame." Pressure from who? He then quickly shot the idea down by saying "they had their chance." Whatever.

The Big XII Athletic Directors decided to leave the controversial fifth tie breaker in place that sent Oklahoma vice Texas to the Big XII Title Game last fall. The coaches voted to keep it because it gives a Big XII team the best chance at playing in the BCS Championship game. True.

Everybody wishes they were Tim Tebow. Even former teammate Percy Harvin is jealous. Dr. Saturday has the details and the pictures.

Colorado changed Offensive Coordinators and is tweaking their scheme post spring practice. That should help Dan Hawkins get the ten wins he predicted.

In the latest edition of off season SEC drama Steve Spurrier called out troublemaker Boy Kiffin in front of some reporters as Kiffin was escaping in an elevator. The following day SEC commish Mike Slive told all the SEC coaches to cut it out. Every time I read another article about these SEC spats I can hear Why can’t we be friends playing in the background. Weird.

Speaking of characters in college football, Lee Corso recently had a minor stroke but expects to be fully recovered in time for the season. Best wishes to the Coach in a speedy recovery. Corso used to drive me nuts but over the years I have developed a soft spot for the crazy pencil waving bastard. I actually get a laugh out of some of the nutty stuff he says on Saturday mornings despite the fact that I disagree with 95% of it.

The final USA Today Coaches Poll votes will no longer be made public. Does it really matter? Several of these guys will vote in their best interest regardless of who sees it.

On that note news broke this week that former AFCA President and noted "Molder of Men" Ty Willingham was still getting paid by Notre Dame three years after his firing. Coincidentally bleacher report credited Ty with the worst coaching performance of the 21st century in the same week. Classic.

One can pick quite a bit at Willingham's successor but one thing you always have to give Charlie Weis is that he's all class when it comes to the more important things in life. Thoughts and prayers to Herzlich as he continues to battle Ewing's sarcoma.

Notre Dame Center Dan Wenger is one of 44 Centers on the spring Rimington watch list. Congrats to Wenger. Let's hope he's still on the list when it gets whittled down to one.

USC claims they want to schedule some SEC teams but can’t make it happen any sooner than 2015. Speaking of schedules…

I'm not real jazzed about the news and rumors this week surrounding future Irish schedules. For starters I'm not a fan of the 7-4-1 model to begin with. I get it, but I don't like the degree of difficulty it creates in scheduling quality opponents. I realize it is easy to pick it apart as a guy on a couch but damn. For starters a series with Army is apparently now a done deal. I was all about one off site game with Army especially if it was going to be played at Soldier Field or the new Yankee Stadium. It would create some good buzz for the program, acknowledge the history between the programs and the Irish would likely take care of business. Cool. But a long term series with Army will not help bring the program back into prominence. I'm a huge fan of the service academies they are all filled with great Americans. I also love the Navy series, I'm a huge fan of that history and tradition. Why can't the Irish just stick with Navy and focus on getting some better matchups with the SEC or Big XII? Maybe even throw an ACC team other than BC back in there.

The only games currently slated on future schedules with the SEC or Big XII is Oklahoma in 2012 and 2013. That's good stuff, can we get one or two more of those? Please! The new rumor that surfaced this week is that Wisconsin AD Barry Alvarez initiated talks about a Wisconsin home and home. That's a pretty decent option so long as it replaces another Big 11 team like Purdue for a couple of years. Alvarez alluded to that being part of the deal and We Is Notre Dame touched on it their take on the deal as well. I can buy that, if nothing else it's a different middle of the road Big 11 team with good fans. I realize scheduling is complicated and when you schedule teams years in advance there is no way to know how good they'll actually be when you get to them. But in the short term the Irish have exactly one team on the schedule in 2009 that is ranked in any preseason Top 25 and that's USC. If the boys pull out 10-11 wins the media slant will be the "soft schedule." To get the program all the way back to the top and snag a legitimate title shot you need 3-4 games against top tier competition. USC is a known quantity, assuming they continue to avoid sanctions, and Michigan should be back in the next couple of years. Oklahoma in 2012 and 2013 is perfect, now let's get something similar for 2010 and 2011. Maybe even throw one more in there for good measure. Otherwise the end result of this 7-4-1 business could be that the Irish run the table in the next few years only to get left out of the BCS Championship game due to playing a "soft schedule." Why risk it?